Two goals in the minutes before half time, one of them an unusually fortunate counter from Lionel Messi, helped Argentina on their way to a comfortable 3-0 win over Uruguay in a World Cup qualifier on Sunday.

Eight minutes before the break Messi floated a 35-metre pass into the area but it was missed by both advancing striker Nicolas Gonzalez and goalkeeper Fernando Muslera and somehow sneaked into the net.

It was his 80th international goal for his country – the most any South American player has scored – and was presented with a CONMEBOL award for making history following the match.

Six minutes later Lautaro Martinez swung and missed at a chance on the edge of the box but the loose ball fell into the path of Rodrigo De Paul who made no mistake. 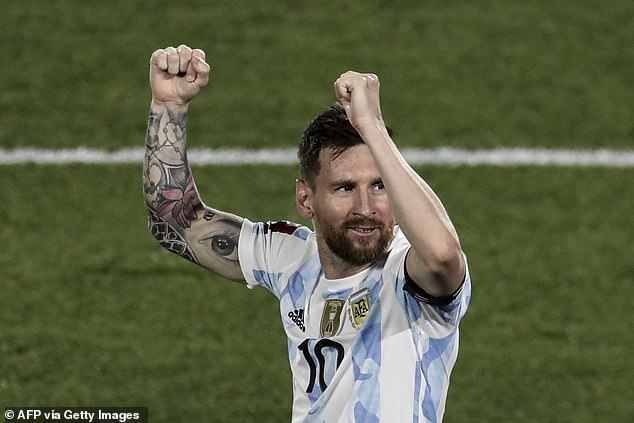 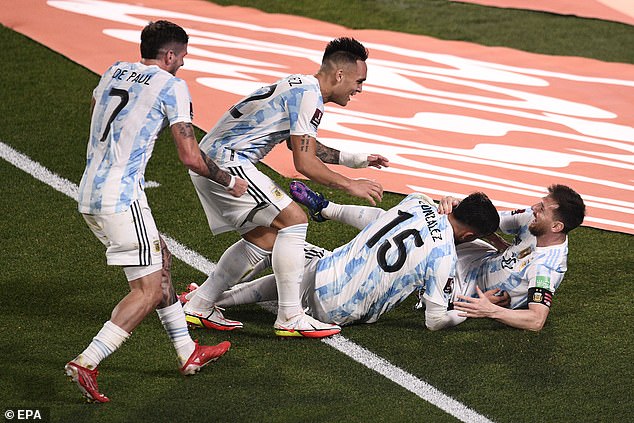 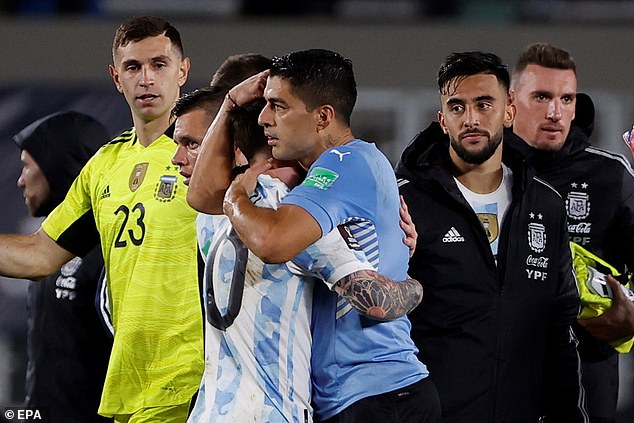 Martinez made up for the miss when he converted a low cross from De Paul 17 minutes into the second half.

‘We played a great game,’ said Messi. ‘Everything worked out perfectly.’

‘Uruguay wait for you and they generate danger. Once we got the first goal we started to find space and the goals appeared.’

The win, combined with Brazil’s 0-0 draw at Colombia earlier in the day, narrows the gap between leaders Brazil and second-placed Argentina to six points at the top of the 10-team South American qualifying group.

The top four teams qualify automatically for Qatar and the fifth-placed side go into an inter-regional playoff.

Uruguay, who ended the day fourth in the 10-team table, were unbeaten in eight matches coming into Sunday’s match. 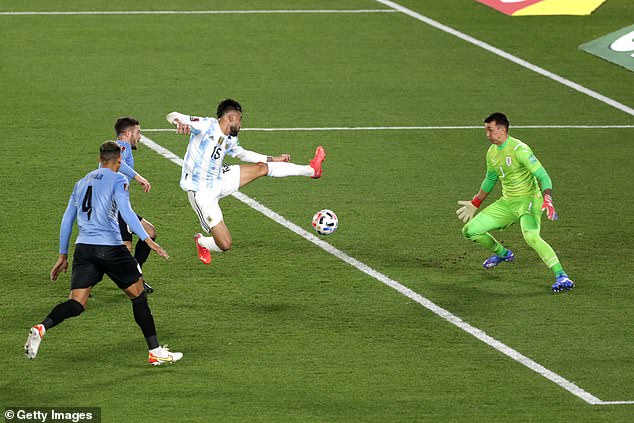 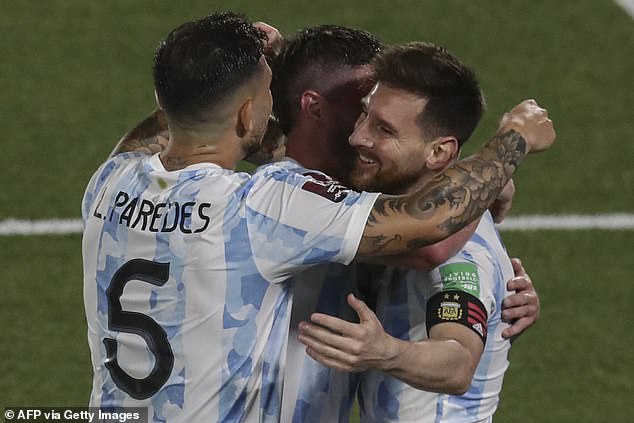 They took the game to their rivals, with Luis Suarez coming close on three occasions in the first half hour, including one thunderous shot that came back off the post.

Argentina grew as the game went on, though, and Giovani Lo Celso missed a golden chance to open the scoring when he rounded the goalkeeper but delayed before striking a shot that hit the underside of the bar and the goal line before rolling to safety.

After the home side drew first blood they never looked like losing an unbeaten run that now stands at 24 games.

Edinson Cavani came on in the second half for Uruguay but it was Argentina who had the better chances in an entertaining game that featured only 15 fouls and no cautions. 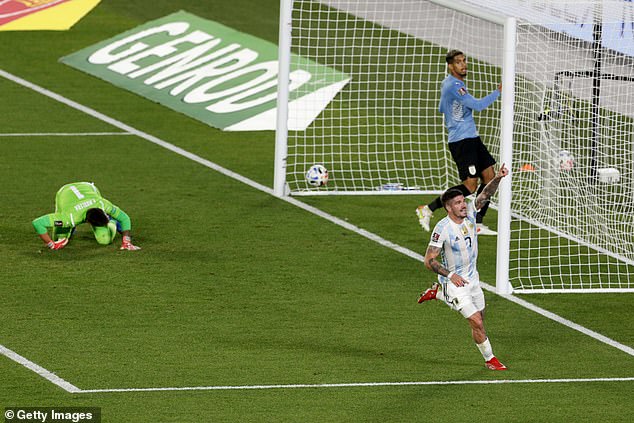 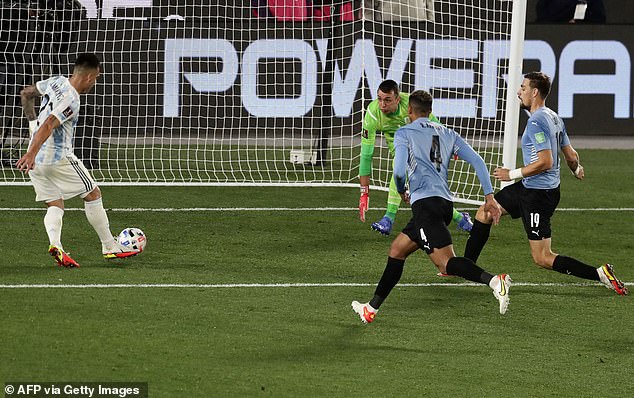 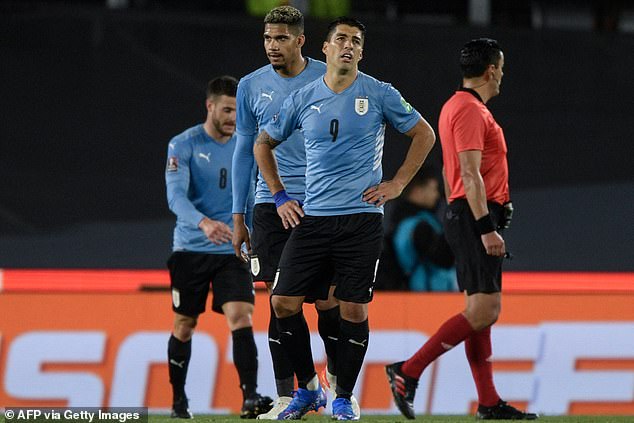 Messi came close to getting his second and substitute Angel Di Maria could have made it four on two occasions only to twice see Muslera parry his goalbound shots.

Elsewhere, Chile won for the first time in eight qualifying matches to keep their slender hopes of qualifying for Qatar alive.

Ben Brereton and Mauricio Isla scored in the 68th and 72nd minutes to lift the Chileans, who missed out on Russia in 2018, on to 11 points, just five behind fifth-placed Colombia.

Charles Aranguiz was sent off two minutes later for the home side but Paraguay could not make their late advantage count and they had their own player sent off in the final minute when Omar Alderete saw red. 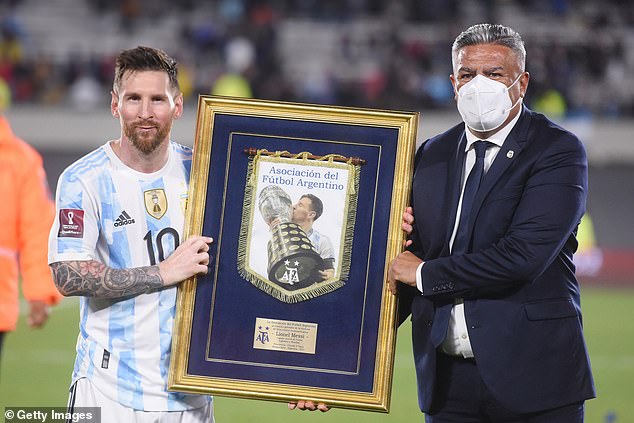