As a former Tottenham academy player who had his first training sessions in a disused warehouse somewhere in Russia, went to school at Harrow but grew up watching Match of the Day and dreaming of becoming a footballer, Armando Shashoua already has a special story.

The 21-year-old midfielder, with the No 6 on his back because one of his football idols was Xavi, was at the heart of the biggest cup shock in Spain this season when his team beat first division Getafe 5-0. 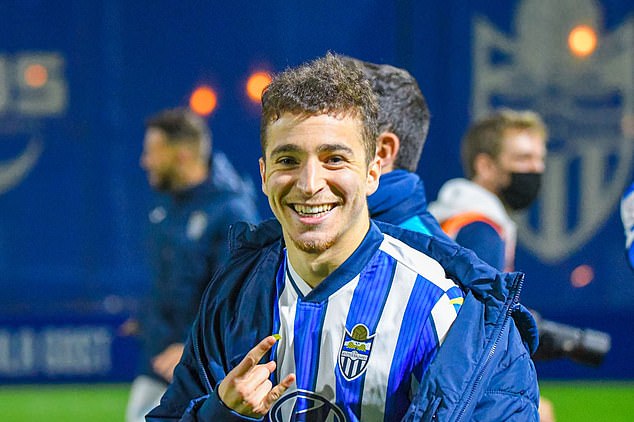 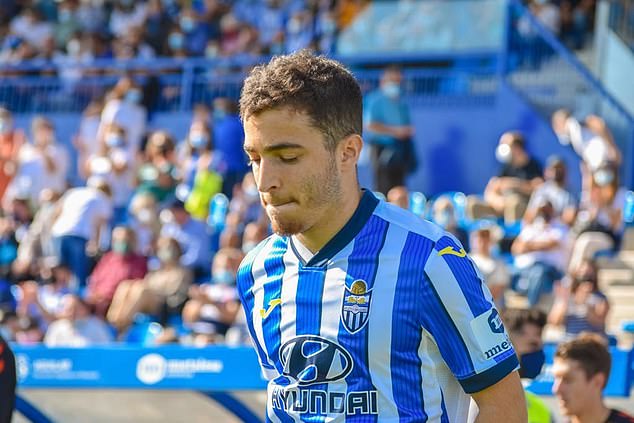 He was involved again when they beat another top-flight side Celta Vigo in the next round. And Sunday lunchtime he faces Valencia for a place in the quarter-finals.

He is eligible to represent five countries – Egypt and the US (because of his father), Spain and Venezuela (because of his mother), and England where he has lived all his life before moving to Mallorca. All his life, that is, bar that brief spell in Russia.

‘My earliest football memory of properly training is when we went to live in Russia when we were little because my dad was working there,’ he says. ‘Me and my brother we were so into football my dad hired a trainer for us and we went to an abandoned warehouse to train – my memory of this is bad because I was about four years old at the time.

‘We used to practice with these tiny little balls that didn’t have a flat surface so they bounced off the walls weirdly, it was to test touch and things like that. That’s’ where we started.

‘We came back to England and I played for London Colney Colts aged six and I got picked up by Tottenham aged seven.’

His dad, Mark Shashoua, CEO of events multinational Hyve, was a Southampton supporter, ‘because of Matt Le Tissier’, Armando says, and while not passionate about the game, he could see that his two sons were – Armando’s older brother Samuel now plays for Tenerife.

‘We moved around a lot,’ he says. ‘I was born in Chelsea, then we went to Russia, then when we were in Hertfordshire. I went to a school called Edge Grove. My brother went to Harrow. Myself and my mum moved to Battersea and I finished the two last years of prep school in Battersea and then I went to Harrow as well.’

He’s well aware that ‘I went to Harrow’ is something a prime minister is more likely to say (Winston Churchill went there) than a footballer. ‘There were definitely differences between myself and the people I was around because of football,’ he says.

‘It’s something that has really helped me in terms of getting to know a variety of cultures, people and upbringings. I definitely did feel a little bit different in that I stayed at boarding school and I came from there to training four times a week. I never thought that was a bad thing and I was always grateful to my dad for that and to my mum, (Alejandra, a psychotherapist) who would drive me to Tottenham even though it was a two-hour journey.’

He’s not the only footballer to have been privately educated. Frank Lampard and Alex Oxlaide Chamberlain are two England internationals who both went to fee-paying schools. And he says it was an issue for some coaches but almost never for young team-mates. 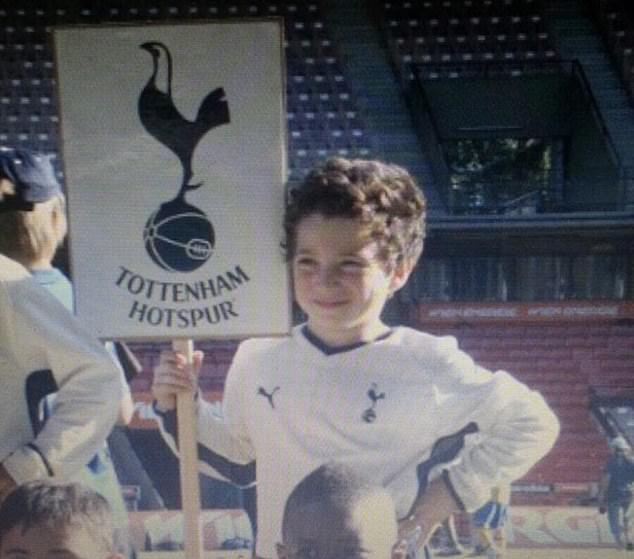 As a kid, Shashoua was on the books at Tottenham from just seven years old 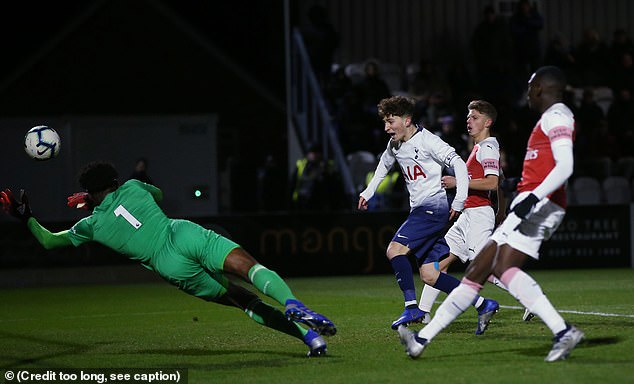 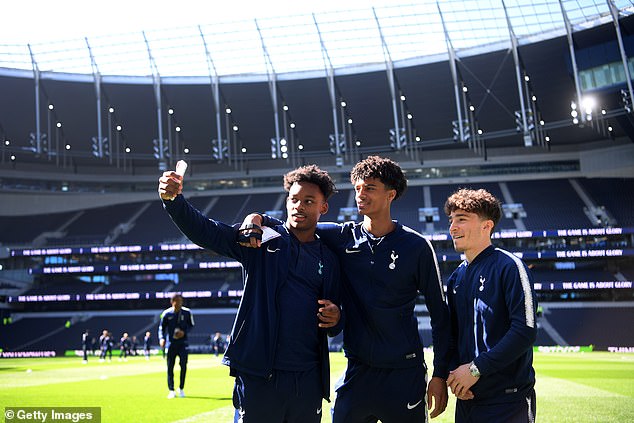 ‘At Tottenham, we had a good group and we had been together from a very young age. I remember I had a birthday party once when I was at Spurs and a bunch of the Tottenham people and some school friends all came.

‘I have now come to the point where my Tottenham friends and my school friends all hang out together.

‘It was something I got more from coaches: “Oh, you’re a posh boy, you could have your life sorted out for you, how much do you really want it?”

‘These are things that get brought up and it’s up to you to show that, no, I do want to play football because I love the game. And to show that, through everything you do.

‘It was something I got from teachers as well: “Oh, I think you should do something else”.

‘It’s how much you want it, essentially. I just remember as a kid watching Match of the Day and watching games at the weekend and thinking this is what I would love to do.’

He was seven when Spurs spotted him at a one of their Friday night Spurs Lodge dome events. He had grown up idolizing Xavi and Iniesta, and at Tottenham he would be taken under the wing of another small but technically-blessed midfielder.

I had Scott Parker and Matt Wells for the U17 and U18 teams and we were amazing those two season,’ he recalls.

‘Those two are the biggest influences. As a pair they’re incredible. Scott sees things that only a footballer who has played at the highest level would know.

‘Matt Wells studies the game to an absurd degree; you can say he’s obsessed. Our playing style would have reminded you of Pep [Guardiola]. They are doing really well at Bournemouth now, which makes me very happy.’

Maybe Parker saw something of himself in midfielder Shashoua? ‘Hopefully he sees even one percent,’ he says. ‘He’s a legend.’

But frustrated by the U-21 league and what seemed like no real path to the first team he moved on loan to Atletico Baleares in January 2020.

‘It didn’t go very well at first!’ he laughs. ‘The manager said in an interview that he wasn’t really sure who I was. Then Covid hit and the whole season was kind of written off.’

Sporting director Patrick Messow wanted him to stay, however, and when former Birmingham U-23 coach Xavi Calm came in as new manager Shashoua became a first team regular. 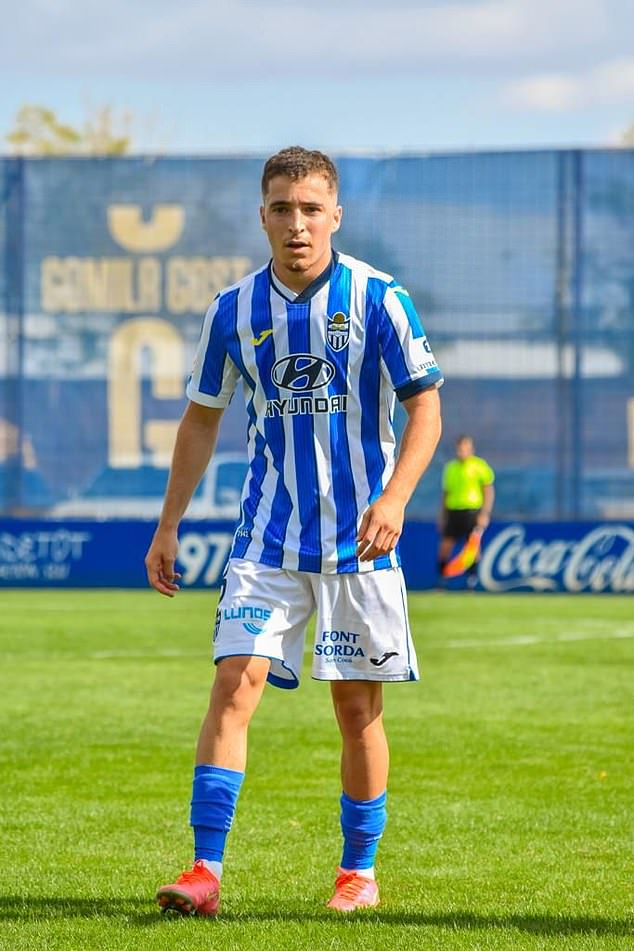 Fast forward to last December when he played the biggest game of his life so far in that cup shock.

‘It was an incredible night: Evening kick-off, full stadium, a first division team. To win 5-0, I couldn’t believe it. At one point we were keeping the ball at the end and the fans were doing the “Ole!” with every pass.’

They beat Celta Vigo 2-1 in the next round and that guaranteed a huge last-16 draw.

‘There’s a part of you that wants Madrid or Barcelona,’ he says. ‘But you’re playing a first division team in the cup.’

Getting Valencia also means a shock is that little bit more likely. ‘I was speaking to someone on the pitch after the game against Celta saying: you know what? Let’s win it. Let’s win the cup. Why not? There’s that dream that carries you forward. The odds are minimal, but that’s football.’

Shashoua has just signed a new contract until 2024 and he says best scenario going forward is to play for Atletico Baleares in the second tier.

Of a return to England he adds: ‘For the next year or two years it is more in my head to play in Spain. But I would love to play in the Premier League for example if that became an opportunity. I don’t see a path there just yet: I need to do more in goals, assists, playing at a higher level in the second division or la Liga, so Spain feels like a good place now for me.’

His dad must be pleased he looked up the personal coach for his young sons in Russia. ‘I think my mum is more happy because she spent so many hours driving us to training. All the love in the world goes to her for doing so much for me. She would take Sam and I everywhere. To the thing in Russia as well.’

Did his parents ever doubt this was the career for him? ‘I Think my dad thought it was a hobby until it got really serious,’ he says. ‘I got a Nike contract and my brother was signing a scholarship at Spurs. Up until then I don’t know that he saw it as a career path. But my mum said: whatever you choose, I’m with you.’

Work commitments and Covid complications mean they can’t be at the game on Sunday but both will be there in spirit. And if Atletico Baleares make it a hat-trick of top flight scalps, they will be in the quarter-finals.