Kylian Mbappe’s mother, Fayza Lamari, has shared a tweet in support of her son as reports continue to emerge of problems behind the scenes at PSG.

French outlet L’Equipe had reported that Mbappe is at the centre of a PSG squad split and is fast losing support from his teammates, with several angry at his privileged position within the club.

The French star signed a new deal with the French champions in the summer worth £650,000-per-week after sensationally snubbing the advances of Real Madrid.

As part of the new deal, Mbappe was also handed influence over sporting affairs and the way the club is run. 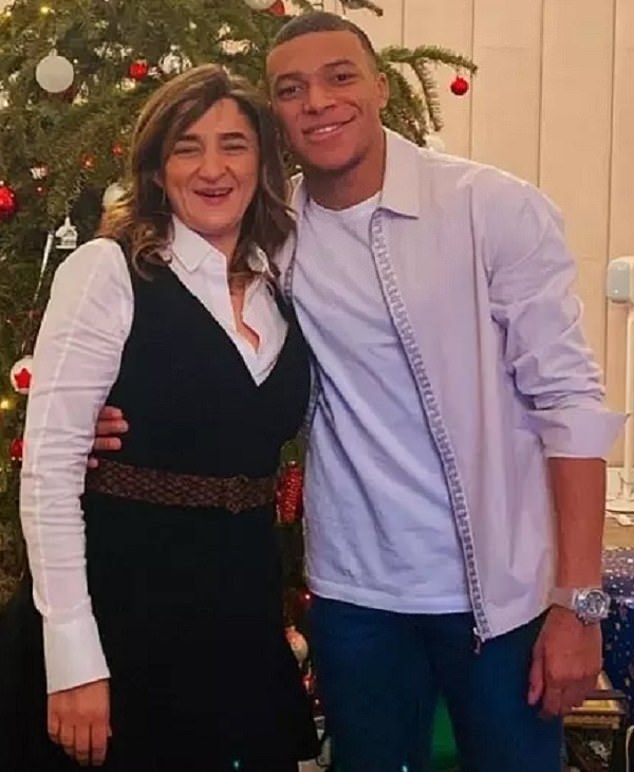 Kylian Mbappe’s mother, Fayza Lamari (L), has shared a tweet in support of her son

However, it hasn’t stopped the talking at the Parc des Princes with several dramas continuing to engulf the club, as reports broke earlier this week in Le Parisien that Mbappe now wants to leave PSG after feeling ‘betrayed’ by the board.

In response to the rumours circulating surrounding Mbappe, Lamari retweeted a post which claimed her son had been the victim of a ‘smear campaign’ that has forced him to leave PSG.

The tweet said: ‘The usefulness of the information has left to denigrate Kylian? Proof that they are all leading a smear campaign that pushes Kylian’s disgust to push him to leave…’

Lamari’s sharing of the supportive message comes after she also said was ‘proud of the man Mbappe has become’.

Following the French champions’ disappointing 1-1 draw with Benfica in the Champions League on Tuesday, in which Mbappe scored, the 23-year-old and his mother attended an event organised by ‘Inspired by KM’ – Mbappe’s foundation.

According to RMC Sport, the forward spent Wednesday helping disadvantaged children, rather than watching bullfighting as had previously been reported by Spanish media. 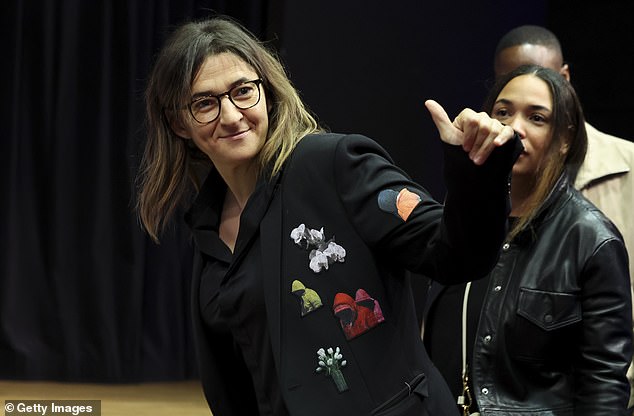 Mbappe who outlined his delight at being able to help young people, said at the event: ‘In life, there are not only easy things. Otherwise, it would be too easy. But the children must continue to hold on.

‘You have to help them, give them the right messages, and the right ingredients, and guide them. They are the ones who will achieve their dreams.’

Lamari also expressed her pride at Mbappe while attending the event with her son.

‘When he becomes a world champion, as a former sportswoman, I am indeed happy,’ she told reporters.

‘But what I am most proud of is the man he has become. The time is not over. He still has time to grow as a person, but today I am proud of him, of course.’ 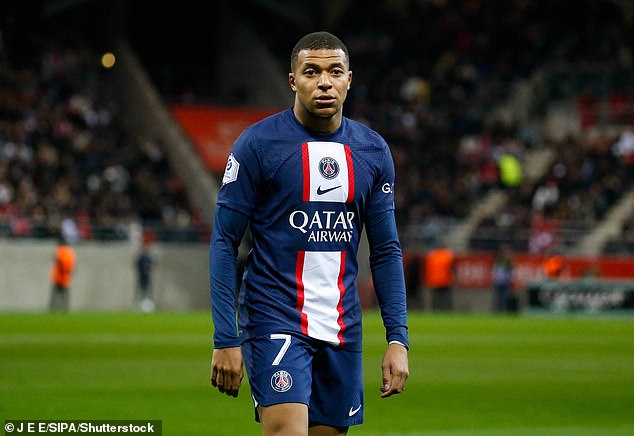 In the report surrounding the split in the PSG team, L’Equipe said the discontent within the squad towards Mbappe is continuing to grow.

Several of his teammates are reportedly unhappy with the French star’s attitude, which continues to change each week, with Mbappe becoming increasingly isolated within the squad.

The PSG squad is now split, with Neymar – who has infamously had public tension with Mbappe on several occasions already this season – and his South American teammates turning away from Mbappe after the Brazilian learnt of the Frenchman’s desire to see him leave in the summer.

Similarly, centre-back Marquinhos and the Spanish speakers in the squad are also angry with Mbappe’s increased power. 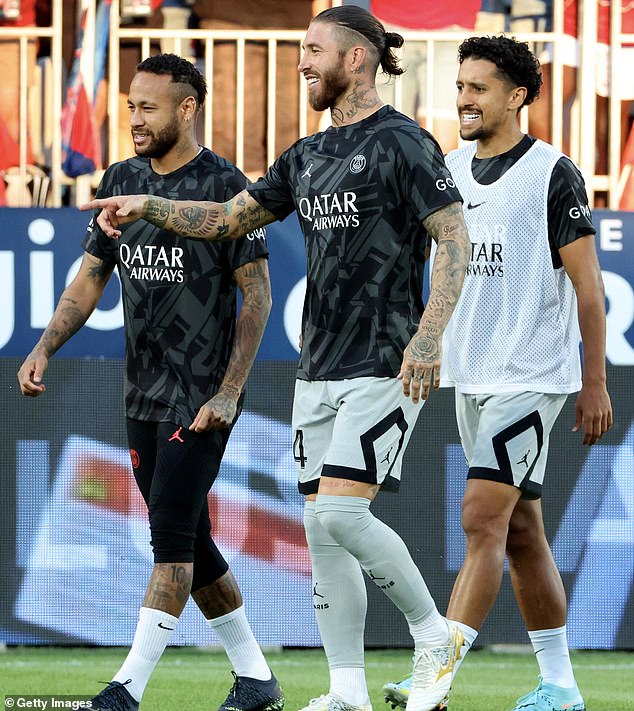 Neymar’s (L) South Americans, Marquinhos (R) and the Spanish speakers within the squad are unhappy at the privileged position and power that Mbappe has been granted by the club

Mbappe’s support base is ever shrinking with the club’s star man now only having the backing of his fellow French teammates Presnel Kimpembe, Nordi Mukiele and Hugo Ekitike, along with Achraf Hakimi.

It was hoped that the arrival of new boss Christophe Galtier would heal divisions within the dressing room, which had previously held the club back.

This was boosted by the exits of Argentinian stars Angel Di Maria and Leandro Paredes as this reduced the significant influence of the South American players in the squad.

However, the South Americans who remained were unhappy with the amount of power that Mbappe had been granted, with the terms of his new contract evident of a club who were desperate to retain their star man. 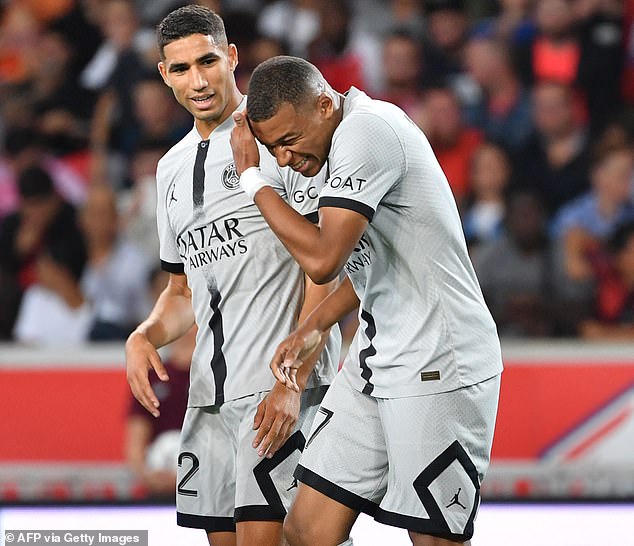 Along with Marquinhos and several Spanish speakers in the squad, their influence in the group has increased over recent times, with many expressing their anger in private that Mbappe received so much power and control over the club’s affairs.

The 23-year-old’s attitude at the club has not helped and the situation today seems a far cry from the joyous scenes when his new contract was announced, with the forward proudly posing on the pitch with club president Nasser Al-Khelaifi back in May.

Staff at the club’s training ground, Camp des Loges, speak about a player whose mood can change instantly for the better or the worse, but one that has deteriorated during the current season.

One club insider said: ‘One day, he arrives at Camp des Loges, all smiles, jokes and greets everyone, and the next day, he arrives without a word, does not look at anyone. And it’s been like that since the beginning of the season.’

Mbappe, the highest-paid player in the history of French football, is reportedly very close with sporting advisor Luis Campos and his deputy Oliver Gagne, which may explain the news that broke surrounding Campos also being set to leave the club in a separate report from Le Parisien.

The outlet stated that like Mbappe, Campos also felt ‘betrayed’ by the club, with the pair having known each other since the PSG forward was 14 and they spent time at Monaco together.

Furthermore, many of Mbappe’s teammates are apparently confused as to why he is reportedly keen to depart, particularly given the fact he was gifted carte-blanche of the club’s affairs as a result of his new deal. 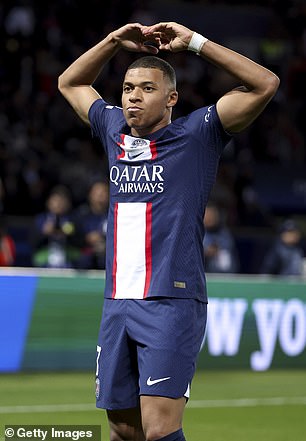 Mbappe, who has a direct line with French President Emmanuel Macron, with Macron reportedly playing a key role in convincing him to stay in the French capital, is becoming more and more unpopular at the club, giving Galtier a huge problem.

In truth, he has cut an unhappy figure in France in the early part of the new season, having openly slammed Galtier’s tactics and also experienced the aforementioned fall out with Neymar.

He has notably felt frustrated with Galtier’s attacking system, and has publicly explained that he prefers playing in a two-man system alongside a pivot, like he does with Olivier Giroud in the national team.

Last week, he was critical of Galtier following PSG’s goalless draw against Reims.

Mbappe posted an Instagram story that included a picture of himself in action accompanied by ‘#pivotgang’ in a dig at the way in which his manager had used him.

Galtier has since played down the criticism, insisting that it was merely a reaction in the heat of the moment.

‘I spoke a lot with Kylian at the start of the season and I was very attentive to his comments when he was playing for France, saying that he felt better in Les Bleus’ attacking set-up,’ the PSG manager said. 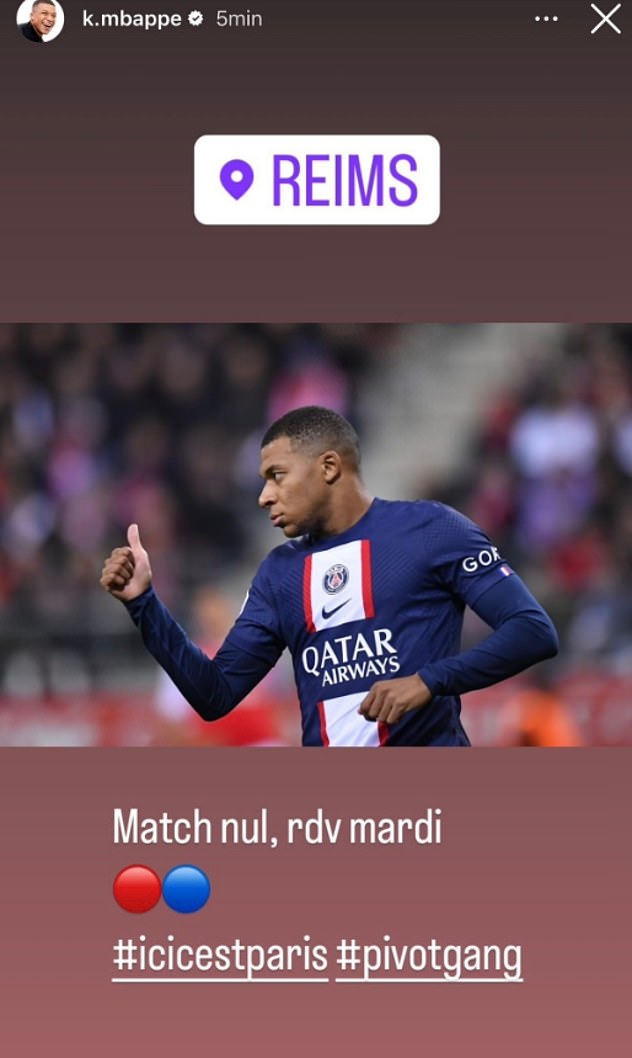 ‘Across pre-season we spoke with [football advisor] Luís Campos and the president [Nasser Al-Khelaifi] to get a fourth striker, with a different profile, who would allow for two strikers and for Kylian to play as much as possible in his preferred area.

‘Kylian sometimes finds himself in the middle and he gets the impression that he’s a pivot. But he’s a smart player who’s capable of adapting.’

Tensions between Mbappe and Neymar have grown in recent months, with the duo clashing over a penalty during PSG’s 5-2 win against Montpellier in August.

After Mbappe had missed a penalty earlier in the game, the pair argued over who should take PSG’s second spot-kick.

Neymar eventually stepped up to take it and scored, but Mbappe didn’t celebrate with his team-mate. Subsequently, Neymar liked a series of tweets criticising Mbappe.

Following that, Mbappe seemingly refused to pass to Neymar in their Champions League clash with Juventus, when the Frenchman instead elected to shoot and missed the target. 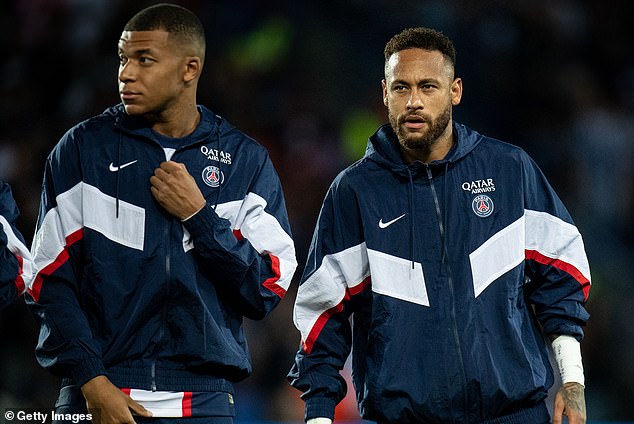 The relationship between Neymar (right) and Mbappe (left) has reportedly deteriorated

PSG have also denied reportedly calling on an external company to create an army of fake accounts in order to lead campaigns against various media outlets and club staff, including Mbappe.

A Mediapart investigation was published on Wednesday morning revealing plenty of examples from their findings surrounding the French giants.

One example the article cites is from March of 2019, when rumours had originally surfaced about a potential move to Real Madrid for Mbappe.

At the time, the 2018 World Cup winning forward had given an interview to Telefoot explaining that he wanted to stay despite their Champions League elimination.

One account, Paname Squad – who Mediapart claim to be provided with information by PSG – congratulated the forward on his decision but also called on players to ‘work in silence’.

The same account also posted a critical message when Mbappe had been named Ligue 1 player of the year at the UNFP awards and explained in his speech that it was perhaps time for him to take on ‘more responsibilities’. 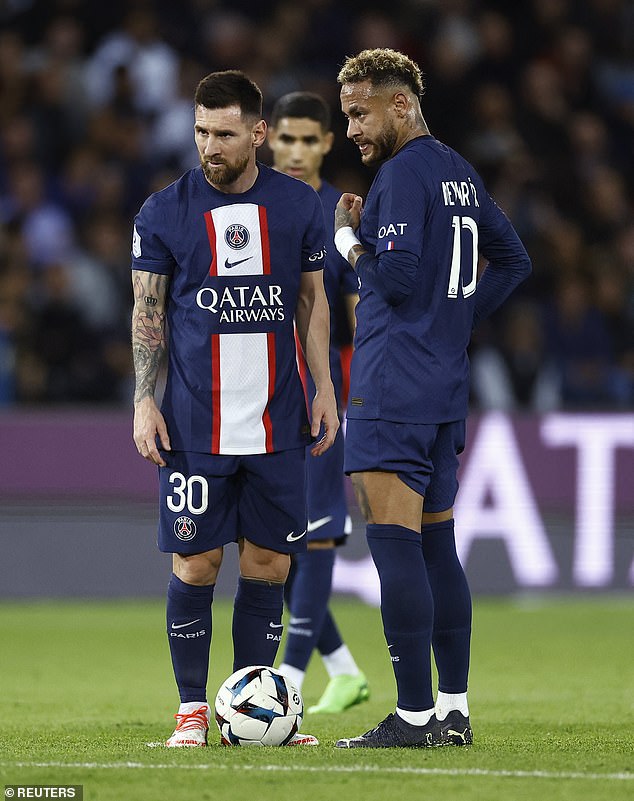 Mediapart have contacted Paris Saint-Germain, who have denied the allegations, stating that they have ‘never contacted an agency in order to damage individuals or institutions’.

A source close to the club has told RMC Sport that Paris Saint-Germain completely and totally deny Mediapart’s claims.

The source said: ‘PSG is a global brand and constantly engages with social media agencies around the world.

‘Local and international – to promote and celebrate the excellent work of the club, its collaborators and its partners – like all companies.

‘The club has never contracted an agency to harm any person or institution.’