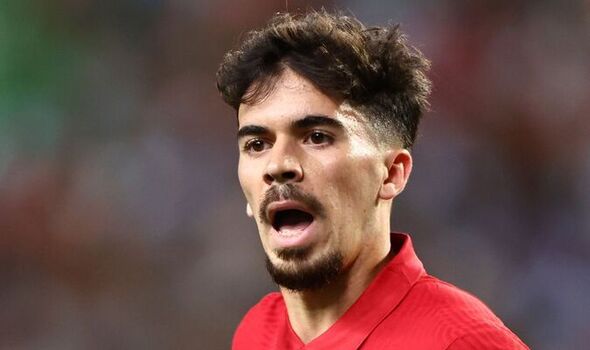 Manchester United and Arsenal are both reportedly ready to trigger the release clause of Porto midfielder Vitinha, who played for Wolves during the 2020/21 season. The 22-year-old has made huge strides back in Portugal this season and is beginning to force his way into World Cup reckoning ahead of November’s tournament in Qatar.

Vitinha made 19 appearances at Molineux but did not do enough to entice Wolves into a permanent deal.

But upon his return to the Estadio do Dragao, Vitinha has really elevated his game to the next level.

He helped Porto win the Primeira Liga and was one of the best players in the division last season.

According to Record, who were the first Portuguese outlet to report Liverpool’s interest in Darwin Nunez, both United and Arsenal are ready to meet Vitinha’s exit clause.

The clause is worth in the region of £35m and would leave Porto helpless in their quest to keep the player.

At 22, Vitinha has emerged as one of the brightest young talents in Portugal and there is a feeling he could be back in the Premier League very soon.

There has also been talk that United have held talks with super-agent Jorge Mendes over his client Vitinha, as the explore the possibility of a deal.

Barcelona are also rumoured to be intersted in Vitinha, who could now leave Porto this summer.

United are clearly in the hunt for a central midfielder as talks for Frenkie de Jong continue with Barcelona.

But the approach – worth an estimated £60m – was rebuffed by the Catalan giants.

It’s not expected to deter United from making another bid though as Erik ten Hag targets a reunion with his former player.

Vitinha is a player of a similar ilk to De Jong given that he can also operate as both a No 6 or No 8.

He may prove to be a cheaper alternative to De Jong, who is currently valued at £74m by Barcelona.

United preferably want to sign two new central midfielders for Ten Hag before the start of the 2022/23 season.

Although he wasn’t a major hit, Vitinha’s Premier League experience could encourage United to push ahead with a deal.