‘He’s back at his level with an incredible performance – almost perfect’: Manchester City boss Pep Guardiola hails John Stones after keeping clean sheet in his first start in over a month against Olympiacos

Stones made his first start for City in all competitions since the opening day of the Premier League season on September 21 against Wolves, helping Guardiola’s side keep a clean sheet as they beat Olympiacos 3-0 in the Champions League.

His playing time has been massively limited so far this season with Ruben Dias and Aymeric Laporte emerging as the first choice centre back pairing, but on Tuesday Guardiola handed Stones – who has struggled with injuries down the years – a rare start in the heart of defence alongside Nathan Ake. 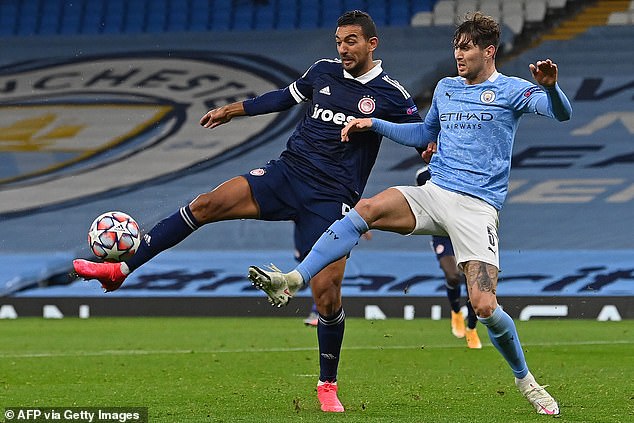 And after keeping a clean sheet at the Etihad, Guardiola sung the praises of Stones after Olympiacos were limited to just a solitary shot on target while pointing to City’s strength in depth this season.

‘Last season we did not have enough players for competitions when we had a nightmare with injuries,’ Guardiola told BT Sport.

‘It was really good, especially Nathan for the beginning and from John.

‘He’s back at his level with an incredible performance – almost perfect – and it is not easy when you are a long time without playing. 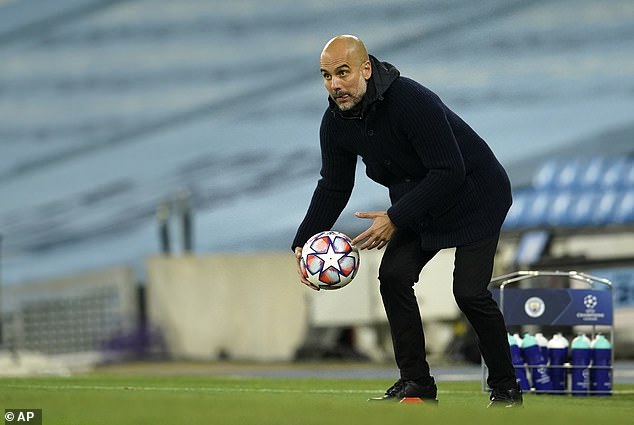 ‘I am so delighted for his mentality, he played really good.’

City made it three wins out of three to start their 2020-21 Champions League campaign on Tuesday night in Manchester.

Ferran Torres opened the scoring in the 12th minute before Gabriel Jesus and Joao Cancelo wrapped up the victory with emphatic finishes late on.

Jesus’ introduction in the second half will also have delighted Guardiola after he made just his second appearance of the season after recovering from a thigh injury. 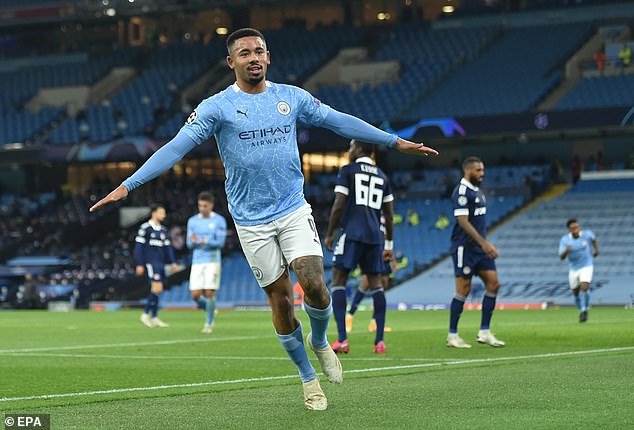 Gabriel Jesus returned to action in style, netting an emphatic strike after coming on as a sub

The Brazilian scored within 12 minutes of coming on, ferociously firing home from a tight angle into the roof of the net.

And Guardiola revealed his delight in Jesus returning to add more firepower to City’s frontline ahead of a crunch clash with Premier League title rivals Liverpool this weekend at the Etihad.

Guardiola said: ‘It was important, of course, the fact he’s back. It’s good news, especially for the striker to score a brilliant goal. I’m delighted with most of the game and happy that Gabriel is back.’