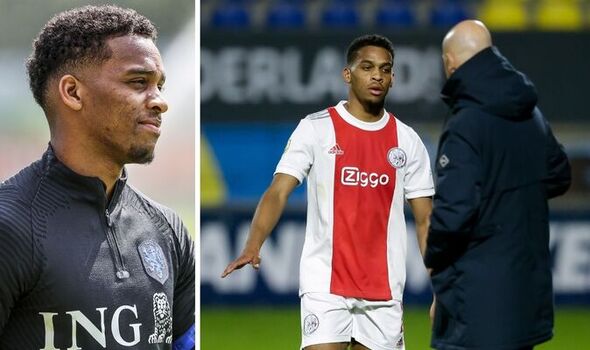 Manchester United transfer target Jurrien Timber has claimed he does not feel he is finished at Ajax yet – posing doubts over whether he is ready to seal a reunion with Erik ten Hag at Old Trafford this summer. The highly-rated Dutch international defender has been the subject of background talks between United chiefs and his agent, who was reportedly in London last week for discussions at the club’s offices in the capital.

But now Timber has seemingly hinted he would prefer to stay at Ajax, despite refusing to rule out a transfer before the start of the 2022/23 season.

Speaking while away on international duty with the Netherlands, Timber appeared to suggest Ajax is the best place for his development after an impressive season in Amsterdam, where he helped his side win the Eredivisie title.

“Of course, I can still develop myself at Ajax, I am 100 percent sure of that,” he told De Telegraaf.

“I don’t have the feeling that I am done at this club. But I can develop myself at other clubs too.”

For now, Timber is focused on the upcoming Nations League matches against Belgium, Wales (twice) and Poland but beyond that, he plans to take some time out to recharge the batteries and reflect on his future while away on holiday.

“I am focused on the upcoming games with the National Team and after that I will go on holiday. That’s when I will start thinking about it,” he added.

“My feeling will decide my decision. The picture has to be perfect. You could move to a big club, but you do want to play.

“If you won’t play, it would be better to stay at Ajax. Ajax is also a huge club, we play Champions League football.”

Timber is reportedly valued at around £43m by Ajax, who are set to demand a premium for the 20-year-old in order to agree to any sale.

It’s already clear that Ten Hag would like to bring his former player with him from Ajax as part of his United rebuild but evidently, he will not come cheap.

He is not the only defender on United’s shortlist though, with Pau Torres of Villarreal also firmly on their radar.

The Spanish international can leave the La Liga outfit this summer after they failed to qualify for the Champions League, despite reaching this season’s semi-finals.

Tottenham are also seemingly interested in the 25-year-old, who would cost in the region of £45m.

For now, United are continuing to assess the market before deciding which of their defensive targets they will pursue with full throttle.

There is an expectation that United will sign at least one new central defender this summer with Eric Bailly expected to move on.

The Ivorian has previously attracted interest from AC Milan and is set to be pushed towards the exit door despite only signing a new contract last April.