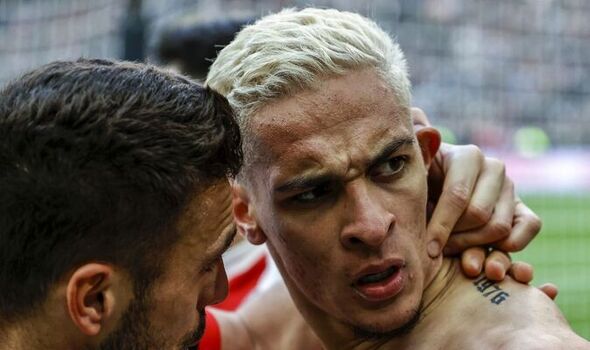 Reports in Brazil claim Manchester United have made an opening offer for Ajax star Antony as Erik ten Hag targets a reunion with his former player and an agreement could supposedly be reached ‘very soon’. It’s no surprise to see the Red Devils linked with the 22-year-old, who flourished and dazzled in Amsterdam under his former coach to help fire Ajax to the Eredivisie title.

Antony arrived at Ajax in 2020 from Sao Paulo and has not looked back, showcasing his quality both in Holland and on the continental stage in the Champions League.

He is also now a regular at international level with Brazil having netted twice in nine caps for the Selecao.

And it appears a move to the Premier League could potentially be on the cards this summer with Ten Hag looking to bring Antony to Manchester as part of his United revolution.

According to Brazilian journalist Jorge Nicola, United are now in the ascendancy for Antony and have made an opening offer – worth around £40m.

He said on his YouTube channel: “Manchester United are expected to reach an agreement for Antony very soon.”

It’s claimed Ten Hag has made Antony his priority target as he looks to sharpen his side’s tools in attack.

The Red Devils finished the season with an underwhelming goal difference of zero and there’s a sense United need more firepower in attack if they are to close the gap on the likes of Manchester City and Liverpool.

Antony hit 12 goals and registered 10 assists in all competitions last season and he continues to improve with every season that goes by.

He is not the only Ajax player United have shown interest in following the unveiling of Ten Hag.

Jurrien Timber remains under consideration after United held talks with the player’s agent at their London-based offices.

The young defender is undecided as to whether he would be prepared to leave Ajax for United this summer though.

Holland manager Louis van Gaal has already advised the centre-back against making the move to his former club so early in his career.

“I think a player with his qualities can play in the Prem. That’s not a problem,” Van Gaal explained. “But if he has to make this big step now – that’s the question.”

When asked if a lack of game time would affect his prospects of playing for Holland, Van Gaal replied: “Then he’s not so wise I think. He has to play.”

United are keen to continue investing in young player with huge potential and both Antony and Timber fit that criteria.

Furthermore, both are seemingly open to reuniting with Ten Hag providing United wish to push ahead with moves.