The Dutchman moved to Old Trafford from Ajax last summer for a reported £35.1m and signed a five-year deal until the summer of 2025.

However, he has found opportunities under Ole Gunnar Solskjaer hard to come by this season, and has made 32 appearances in all competitions for the Red Devils, with just 12 of those being starts.

His last Premier League start was back in early December in the 3-1 victory against West Ham United at the London Stadium, a match in which he was substituted at half time for Bruno Fernandes.

In all, van de Beek’s productivity has been poor amid his lack of playing time, with the big-money arrival managing just once and provided two assists for Manchester United.

His solitary goal came back in September during the Red Devils’ opening day 3-1 defeat to Crystal Palace. 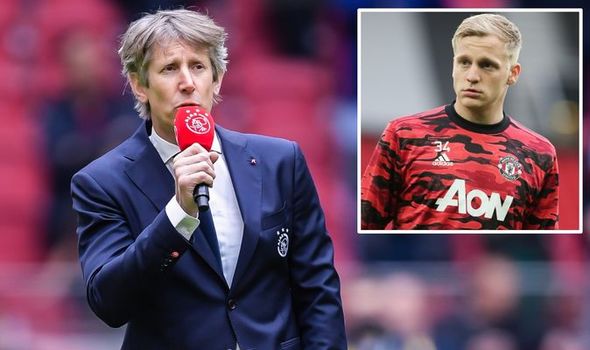 Currently languishing behind the likes of Paul Pogba and Bruno Fernandes in the Old Trafford pecking order for a starting berth, van der Sar has expressed his sadness at van de Beek’s current situation, having seen the midfielder develop during the former United stopper’s time as Ajax’s CEO.

Talking to ESPN, the 50-year-old said: “Of course, I feel sad for Donny.

“He walked the perfect path before joining United. He joined the [Ajax] first team from the academy, became a starter, won trophies, performed in Europe.

“But the midfield of Manchester United is too stacked, they’ve not had any injuries. It’s hard for him.”

Despite his lack of appearances so far, van der Sar is sure of van de Beek’s quality.

The 19-cap Netherlands international scored 10 goals and provided 10 assists in all competitions in his final season with Ajax before the switch to Manchester United.

The former Red Devils goalkeeper has backed him to return to those performance levels sooner rather than later.

He continued: “I do talk to more people at the club. He’s got a fantastic attitude, he is doing well in training.

“It’s hard. Pogba is coming back, Fernandes is very important, Matic and McTominay, who are there.

“There’s no shame at all, it’s a big club too, isn’t it? Of course, it is a large amount [the transfer fee], but they are confident that he will get there.”