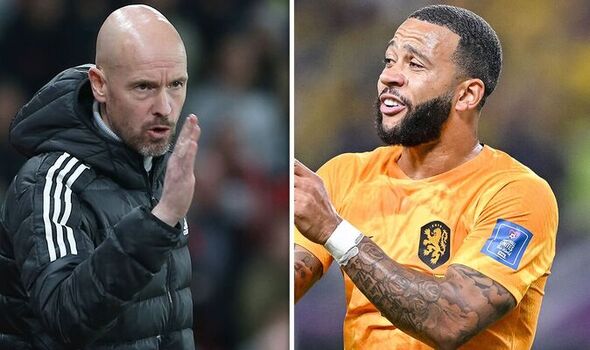 Manchester United have made contact over re-signing Memphis Depay, according to reports. Barcelona are willing to terminate the Dutchman’s contract in order to facilitate a move.

Depay had a hugely disappointing first spell at United. He joined from PSV Eindhoven in the summer of 2015 but scored just seven goals in 53 appearances before leaving for Lyon 18 months later.

He became a regular goalscorer in French football, converting from a winger into a centre-forward. Depay joined Barca on a free transfer in 2021 but fell out of favour following the sacking of Dutch compatriot Ronald Koeman.

Barca wanted to sell him in the summer but he refused to leave. But with just over six months remaining on his contract, United could pounce.

Transfer expert Florian Plettenberg claims Depay is on the list of targets for the Red Devils. Manager Erik ten Hag would be open to bringing him back to the Premier League.

Plettenberg claims contact has been made between all three parties. A free transfer is a possibility in January if a contract termination occurs.

Plettenberg tweeted: “News #Depay: He is also on the list of #MUFC. We’ve been told that Ten Hag can really imagine bringing him back. There is contact between all parties. Barca would even terminate the contract, desperately wants to save the salary.”

Depay scored 76 goals and registered 55 assists in 178 appearances in all competitions for Lyon. He has 14 goals and two assists for Barca despite making just 41 appearances, many of which as a substitute.

Depay, who turns 29 next February, is not the only striker on United’s radar. Napoli’s Victor Osimhen is a longer-term target for the Premier League side.

United need to replace Cristiano Ronaldo following his departure earlier this week. Plettenberg says Osimhen is one of the top priorities for Ten Hag but a January deal looks unlikely.

He wrote: “News #Osimhen: The 23 y/o striker is one of the top candidates to replace Ronaldo. Bosses convinced that he could improve #MUFC! Problem: Napoli doesn’t want to let him go in winter. Regardless of the money. United doesn’t want to pay €100million! No negotiations yet.”

Napoli would likely want at least £87m for Osimhen. The Nigeria striker has nine goals and two assists to his name in just 11 Serie A appearances so far this season.