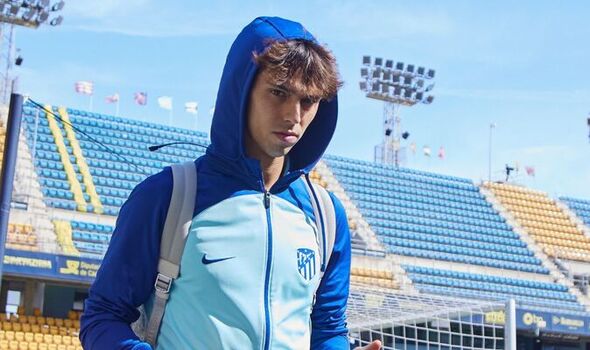 Manchester United have been offered fresh hope that a deal is there to be struck for Joao Felix as soon as January with Atletico Madrid now reportedly ready to sell their underperforming forward. The 22-year-old attacker was signed for an eye-watering fee worth around £113million from Benfica three years ago in 2019 but it appears Diego Simeone is finally losing patience with the Portuguese international as their relationship continues to sour.

Felix has not been featuring as regularly as he would like at the Wanda Metropolitano this season having endured a prolonged run of matches on the bench in La Liga and his absence has continued to cause a stir in the Spanish and Portuguese media.

Simeone’s side were dumped out of Europe in midweek following their 2-1 defeat at Porto which, catastrophically, saw them finish bottom of Group B.

Now Spanish outlet Cadena SER are reporting that Atletico are in desperate need of cash following their elimination from the Champions League which has huge financial implications for the La Liga outfit.

It’s claimed that Atletico would now be willing to listen to offers for Felix, despite previously considering him ‘untouchable’ after Manchester United approached them over a mega-money move in the summer.

Although United did not present a formal offer or proposal, the Red Devils were understood to have enquired over a deal but their advances were quickly turned away by Atletico chiefs.

Now it could be a different story should United wish to reignite their interest in the player as they look to bolster their options in attack in anticipation for Cristiano Ronaldo’s departure.

Felix has been strongly admired by United since his time at Benfica, however, Atletico have remained adamant that the Portugal international remains an integral player for the future.

Yet his tiff with head coach Simeone this season has created tensions behind the scenes and with Atletico now stuck with a monstrous wage bill, any opportunity to offload Felix would certainly be considered.

Simeone recently dismissed allegations of bullying against the forward after he was benched for the Champions League clash with Club Brugge.

“Do you think I’m not playing Joao to lose? No manager does that. When he starts to play well again in training, he works, he recovers his goalscoring touch, which we need, he will play.

“But while I’m here, it’s about performance, that’s why his other teammates are playing. It’s clear that each time he was good, he played.”

Felix’s departure from Atletico Madrid now looks likely, although there is an appreciation he is still a player of huge value.

Given Atletico paid an enormous fee to sign him, they are highly likely to demand a blockbuster fee in order to sanction a sale.

United are expected to explore the forward market once again in January, when Ronaldo is likely to reconsider his future following a challenging campaign at Old Trafford.