Manchester United fans were once again calling for executive vice-chairman Ed Woodward to sign Jadon Sancho after the Borussia Dortmund star provided yet another assist just minutes after coming on as a substitute.

Sancho is one of the most sought after players in Europe with United understood to be the frontrunners for his signature.

The England international has been nursing a calf complaint in recent weeks and Dortmund boss Lucien Favre named Sancho on the bench for their trip to Wolfsburg.

In the first half, Raphael Guerreiro opened the scoring for the away side with an easy finish in the penalty area.

But with the game not put to bed, Favre turned to Sancho in the second half and he had an immediate impact, baiting John Brooks into a foul within one minute of coming onto the pitch. 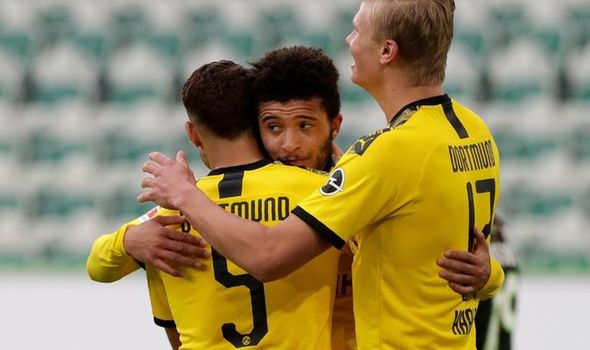 Then in the 78th minute, Dortmund broke quickly out of defence with Sancho leading the charge and he slipped in Achraf Hakimi, who finished coolly. It was Sancho’s 19th assist of the season to add to his 17 goals.

And unsurprisingly, United fans on Twitter took notice and made their feelings clear.

While another added: “Drafting my letter of plea to the Man Utd board, for them [to] buy Sancho I dey beg.” 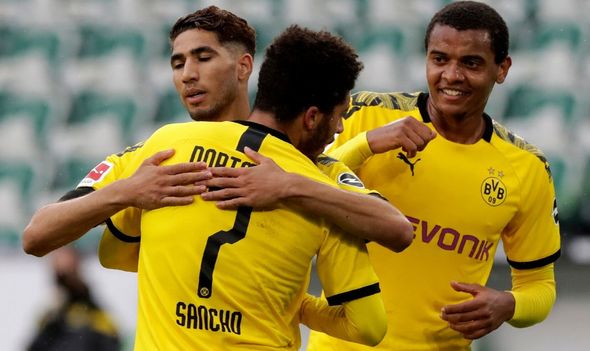 With the coronavirus pandemic impacting clubs financially, United may have to wait before they can sign Sancho but one fan tweeted adamantly: “United should break the bank to get Sancho. He is a winner.”

Meanwhile, United could have some competition for Sancho if former Liverpool striker Emile Heskey had his way.

The Reds have also been linked with Sancho and Heskey thinks his old club should prioritise the 20-year-old over potential moves for Kylian Mbappe or Erling Haaland.

“I’d choose Sancho for Liverpool, out of the three,” Heskey told GentingBet. “Mbappe is a phenomenal player who is another player who keeps on rising and is only going to get better and better.

“He’s focused more to keep the consistency going at that age is just phenomenal.

“It’s difficult, because for Liverpool you’d choose a player who was more on the wing than central. But again, Haaland’s goals are a key factor.

“I’m going to patriotic and say that Sancho would be great, being an England player and an entertaining player as well.

“I would say someone like that would be great to get on the wing and terrorise defences.”