Manchester United are on their worst start to a league season for 48 years… and back then George Best was in disgrace, Bobby Charlton quit, Denis Law left for rivals City, and they failed to win any of their first NINE matches!

Manchester United’s nightmare start to the season continued with their humiliation in Istanbul on Wednesday night in the Champions League, and last weekend in the Premier League saw them match an unwanted record from 48 years ago.

But the misery was heaped further on Ole Gunnar Solskjaer’s men with the defeat meaning they have failed to win any of their opening four top-flight games at Old Trafford for the first time since 1972-73, following defeats to Crystal Palace and Tottenham and a goalless draw with Chelsea.

In that season back in the old First Division, the club would go on to finish in 18th and came just a year before they would be relegated, and here Sportsmail looks into the few thrills and many spills of that campaign. 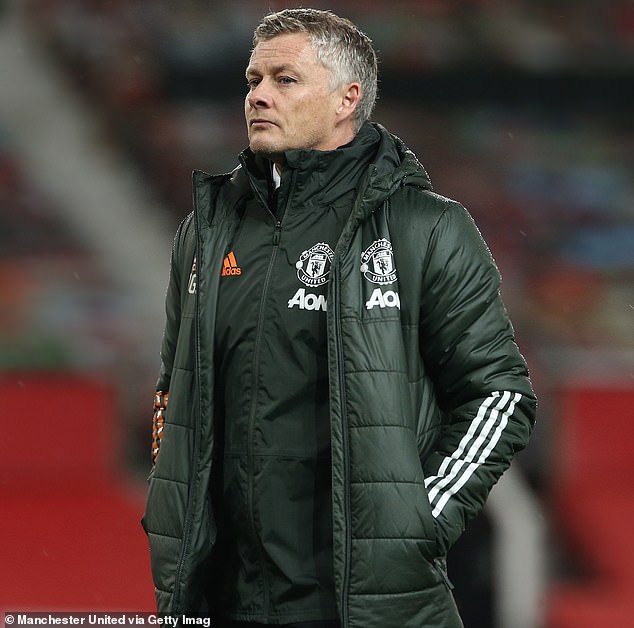 Ole Gunnar Solskjaer’s Manchester United have suffered their worst start to a season since 1972-73, and here Sportsmail looks back at that season 48 years ago

It was something that could not have been said about the summer just gone, given the club’s failure to land Jadon Sancho from Borussia Dortmund, but there was genuine excitement around Old Trafford ahead of the 1972-73 season.

Boss Frank O’Farrell was keen to add to his squad and signed Welsh international Wyn Davies from rivals Manchester City for around £60,000.

O’Farrell also brought in a partner for Davies in the form of Ted MacDougall from third-division Bournemouth for around £194,000, and despite having finished in a disappointing eighth the season beforehand after a promising start, there was genuine hope that their new signings could help the side push up the table. 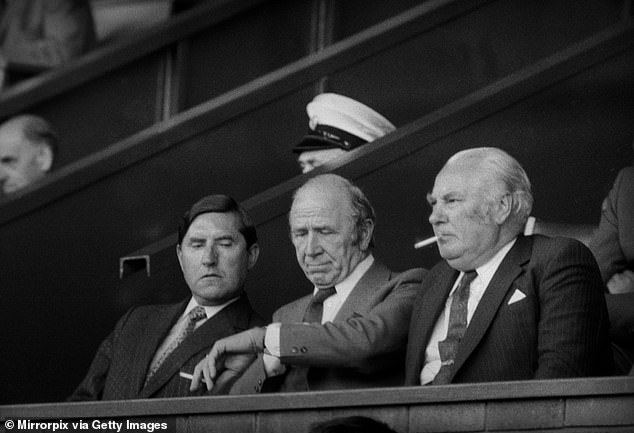 There was much optimism going into the season with the club under boss Frank O’Farrell (left) and Louis Edwards (right) as chairman, a season after Matt Busby (centre) had departed 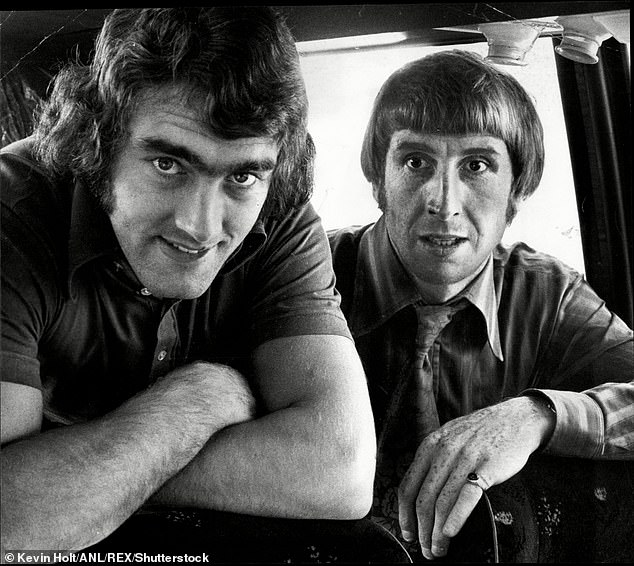 The players donned their new shirts – which included for the first time the devil crest that has become synonymous with the club – but the action on the pitch was far less easy on the eye and a campaign that started with three defeats deteriorated into division within the squad and general chaos.

The club would win just 12 of their 42 league games, be defeated on 17 occasions, concede 60 goals in the process and finish with just 37 points.

Only in nine seasons have United failed to win fewer than 12, with Opta stating that their fewest for a season with the same amount of games came when they won just seven in 1930-31.

Manchester United have played in 117 full campaigns in the Football League.

Defensive errors were apparent from the get-go as United suffered a 2-1 defeat by Ipswich Town in their opening league game, with the Old Trafford faithful showing their displeasure by giving their ‘slow clap’ that only turned into celebration once Denis Law had scored a consolation.

United did not fare much better on the road during the opening fixtures either, suffering two-goal defeats in Liverpool by the Reds and Everton as disgruntled United fans became even more agitated.

The club managed somewhat to curb the glut of goals they were conceding, letting in three in their next four matches, but had to wait until the 10th game of the season before recording their first league win.

Leicester City gained a 1-1 draw at Old Trafford while London sides Arsenal and Chelsea achieved scoreless stalemates, and it became four draws in a row when West Ham cancelled United out at the beginning of September.

United’s fortunes, however, headed further south once more as a 1-0 defeat by Coventry City and a two-goal loss to Wolves made it no league wins by mid-September, with the club having failed to score in six of their first nine league matches.

But finally, a week later, their first league victory came at home to Derby County on September 23, with Ian Storey-Moore, a debut goal for Davies and Willie Morgan helping them to a 3-0 win, even if their defensive issues were still apparent with goalkeeper Alex Stepney being forced to pull off three stunning fingertip saves.

But that was one of very few highs for Davies, who despite being relatively successful in his career before joining United, notably with Newcastle United in the previous decade, appeared unable to deal with the pressure of playing for the club.

He would make only 16 appearances for United and netted just four goals before being sold to Blackpool by the end of the season.

Scottish international and fellow new signing MacDougall had been scoring at a rapid rate at Bournemouth, but his modest return of five goals in 18 appearances also saw him leave at the end of the season, with West Ham rescuing him from his Old Trafford nightmare.

Both new signings got on the scoresheet in November in a home victory against eventual champions Liverpool, but the duo would ultimately misfire which aggravated O’Farrell’s mounting problems. 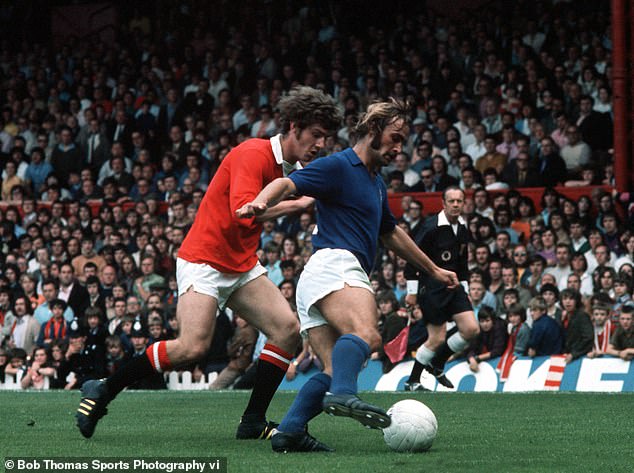 A week later, they would be exacerbated when United were defeated in humiliating fashion by neighbours City in a 3-0 loss, with a blunder from Stepney epitomising the atrocious defending that still plagued the side.

Such defeats also failed to boost team morale, which had already shown signs of fragility with the old guard of George Best, Law and Sir Bobby Charlton struggling to – and frankly showing little desire to – bond with their newer team-mates.

The club’s poor run of results and equally abysmal attacking displays brought out the worst in a frustrated Best, who made headlines by going missing in December to party at London nightclubs.

Best was consequently suspended and transfer-listed at a value of £300,000, with his last appearance of the season coming in late November in a 2-1 win against Southampton. 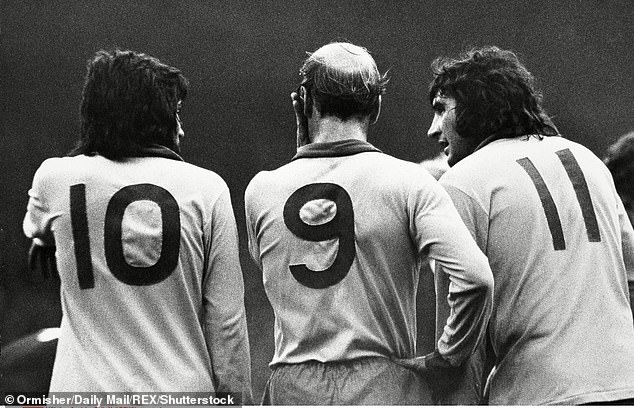 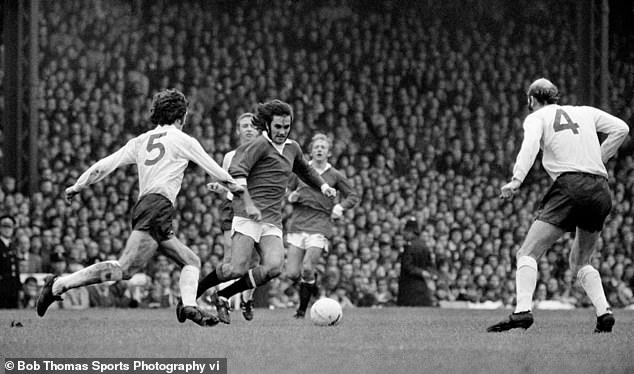 Best also made headlines after going missing in December 1972 to go and party in London. He was suspended and transfer-listed but eventually brought back into the squad in April

Meanwhile, fellow stalwart Law nursed a knee injury which would end up ruining his season and meaning his only goal of the campaign came in the opening-day defeat to Ipswich, while Charlton soon after announced his desire to retire at the end of the season.

By this time the situation at United had turned dire, and after a 2-0 defeat at home to Stoke City and a hammering of five goals without reply by Crystal Palace, the writing was on the wall for O’Farrell.

The United boss was sacked on December 19, the same day that the United board stated that Best would never play for the club again, despite his eventual return to the squad in April.

Tommy Docherty had made his name as an exciting manager when he took charge of Chelsea in the 1960s and had now come in to help a sinking United ship, but despite his best efforts there would be no immediate turn around and they would have to wait until February for their first win under the new boss.

In fact, Docherty could only manage to win three games in a row once before the end of the season, which came when a 2-0 away victory at Southampton in late March was followed up by home successes against Norwich City and Palace. 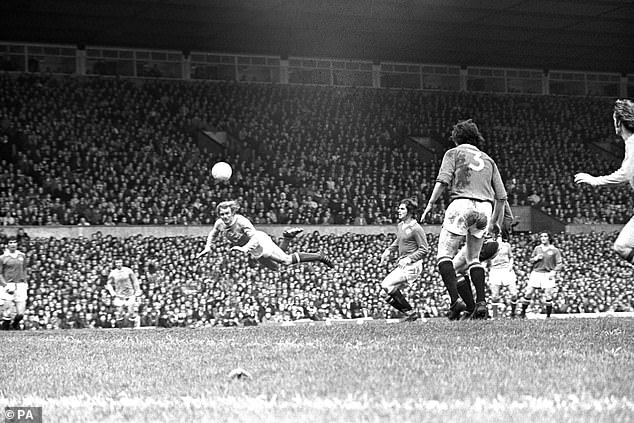 However, results continued to disappoint as they were beaten 3-0 by Francis Lee (here diving for a header) and Manchester City in November

After a 4-1 hammering from Ipswich in February, some positive results against Newcastle, Stoke and Crystal Palace did arrive, but the cyclical nature of their season was summed up in their last two games of an awful season, with United losing their last home game 2-1 to Sheffield United.

Their last game of the season – and Charlton’s last game for the club – came away to Chelsea, and even the United great was unable to avoid a 1-0 defeat being inflicted.

The legendary midfielder, though 36 at the time and past his best, was still key to the side and his retirement was symbolic of the ageing squad Docherty had inherited, not to mention the signings that had failed to pay off.

Charlton topped the goalscoring charts for the season with just six league goals, with the club’s return a mere 44 goals from 42 games. 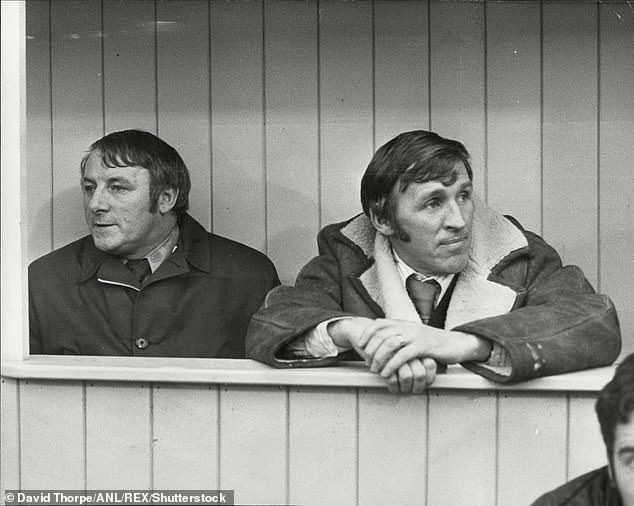 Only on five occasions in their history have United scored fewer, with Opta stating their fewest in a season with the same number of games came in the following campaign when they managed just 38.

Law meanwhile was given a free transfer in July 1973, a move which later came back to haunt Docherty as he joined Man City and scored with a backheel at Old Trafford in April 1974, on the day when United’s relegation to the Second Division was confirmed.

Manchester United have come along way since then, which has – despite their league struggles this season – been highlighted by recent performances in Europe.

But Solskjaer will be keen to avoid even some of the chaos that engulfed the club 48 years ago, which was only near the start of a 26-year wait the club would go on following their triumph in 1966-67 to win the league again. 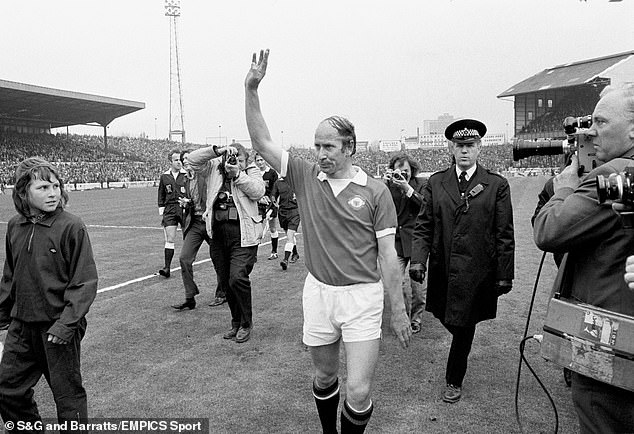 Results did not improve under him and at the end of the season, Charlton waved his goodbyes and announced he would be retiring