Manchester City will be sweating on the fitness of one of their key men ahead of their UEFA Champions League final clash with Chelsea in Porto on Saturday.

Chelsea boss Thomas Tuchel has confirmed he has the luxury of a fully-fit squad ahead of the clash, which takes place at FC Porto’s Estadio do Dragao.

Tuchel confirmed that midfield man N’Golo Kante and goalkeeper Edouard Mendy have both been passed fit to play in the final match of the season in Portugal.

But his opposite number Pep Guardiola faces a nervous wait after City’s midfield playmaker Ilkay Gundogan appeared to suffer a knock during the team’s final training session ahead of the match.

Gundogan went into a challenge with fellow City midfielder Fernandinho and came off second best as they trained on the pitch in Porto.

After the challenge, the German midfielder was slow to get up and subsequently left the session early as a precaution. 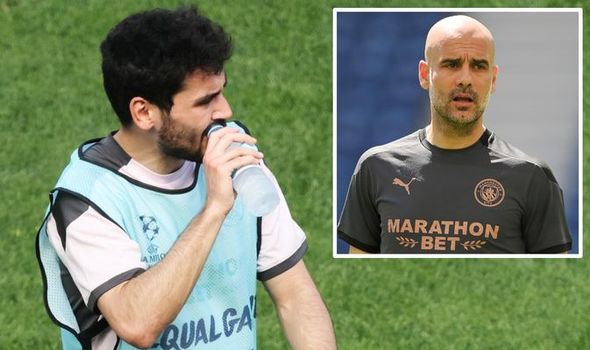 However, there was positive news from PA reporter Andy Hampson, who reported on Twitter that Gundogan had taken a “bang” to the thigh, but explained that City did not believe the knock to be a serious one.

It will remain to be seen whether Gundogan is able to shake off the knock, or whether he will still be struggling when it is time for Guardiola to name his starting XI for the match.

The news came after Guardiola spoke at his pre-match press conference and revealed that he wanted his players to be ready to “suffer” during the tense environment of a big European final.

“I am pretty sure we will have to suffer to win the final,” he told reporters.

“In most of the time in finals, you have to suffer. You have to adjust to the bad moments, but you have to be yourself.

“We suffered in the games against Borussia Dortmund and Paris [Saint-Germain] in the quarter-finals and semi-finals. We suffered, the opponent was better, but we stuck together.

“Tomorrow, we’ll have momentum, but it won’t be 90 minutes for one side. We’ll stick together and try to use it.

“Some players go out and have more pressure and tension. Better players can struggle, but you have to handle it. The guys who can suffer, will suffer. We’ll have to suffer to win.”

Guardiola will be hoping that Gundogan’s knock will be the worst his midfielder has to suffer, however, with the influential playmaker set to make his 54th appearance of the season for club and country.