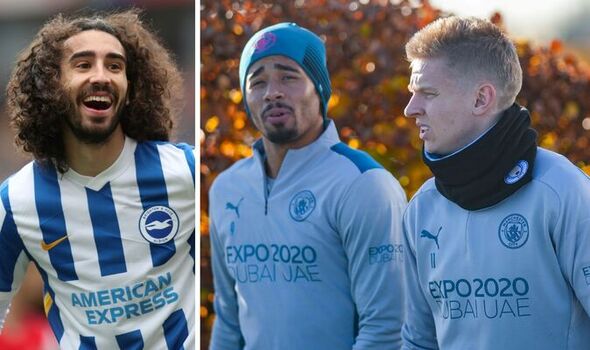 Manchester City are reportedly preparing their opening offer for Brighton left wing-back Marc Cucurella and the capture of the Spaniard would undoubtedly bolster Arsenal’s chances of landing Oleksandr Zinchenko. The Ukrainian international, who can play at both left-back and in central midfield, has emerged as a possible target for the Gunners in recent weeks and they are not the only contenders for his signature with Everton and West Ham also rumoured to be interested.

After winning four Premier League titles at the Etihad Stadium, Zinchenko could now potentially be set to leave the champions in search of regular playing time.

Arsenal would be open to signing him as a midfielder, although he could also provide cover for Kieran Tierney.

According to Fabrizio Romano, City are now set to firm up their interest in Brighton sensation Cucurella, which could open the door for Zinchenko to depart.

Pep Guardiola is understood to be desperate to sign the Spain international, who was extraordinary throughout his debut campaign in the Premier League.

City are confident they can push through a deal for Cucurella and that could bode well for the Gunners in their pursuit of new arrivals.

Zinchenko is seen as a left-back in the eyes of Guardiola and he would be pushed further down the pecking order if Cucurella was to arrive.

Joao Cancelo has also played a lot of his football at left-back ahead of the Ukraine international and a sale could now make sense for all parties.

Cucurella’s potential arrival at the Etihad would hand Arsenal the perfect incentive to push a deal through – providing they want to get ahead with it.

It’s the kind of signing that would tick several boxes for Mikel Arteta, who worked with Zinchenko during his time at City.

He knows the player very well and his versatility would be a huge asset to the Gunners’ squad.

Zinchenko is also vastly experienced having featured regularly in the Champions League. He has also won 10 trophies with City.

He is obviously not the only Manchester City player of interest to Arsenal this summer either.

The Gunners are believed to have lodged their opening bid for Gabriel Jesus, as talks continue over a deal for the Brazilian international striker.

Arsenal remain confident of landing the 25-year-old despite their failure to secure Champions League football.

City are looking for around £50m for the centre-forward, who has just one year remaining on his contract at the Etihad Stadium.

Chelsea and Tottenham have also been offered Jesus, while Real Madrid have also held very basic discussions about his availability in the past few weeks.