Adelaide United defender Josh Cavallo has called out homophobic abuse he says was targeted at him during Saturday night’s A-League draw with Melbourne Victory, saying he could not find the words to describe how disappointed he was.

Cavallo also criticised Instagram for doing little to stop further “hateful and hurtful messages” he received after the match. 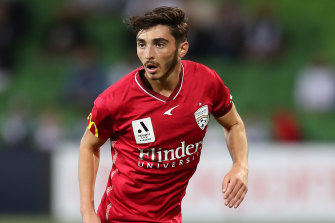 Josh Cavallo has hit out at homophobic abuse he says was targeted at him in person on Saturday night and on social media afterwards.Credit:Getty

The 22-year-old became the first active top-flight male professional footballer in the world to come out as gay in October.

Little more than two months later, he is suffering from the sort of homophobic slurs he said he knew would inevitably be used against him after his historic announcement, which triggered a global outpouring of support from some of football’s biggest clubs and personalities.

Cavallo played 36 minutes off the bench in Adelaide’s dramatic 1-1 draw against Victory at Melbourne’s AAMI Park, but came off during injury time with a suspected concussion after an accidental elbow to the head from Lleyton Brooks.

“I’m not going to pretend that I didn’t see or hear the homophobic abuse at the game last night. There are no words to tell you how disappointed I was,” Cavallo wrote on Instagram.

“As a society this it shows we still face these problems in 2022. This shouldn’t be acceptable and we need to do more to hold this people accountable. Hate never will win. I will never apologise for living my truth and most recently who I am outside of football.

“To all the young people who have received homophobic abuse, hold your heads up high and keep chasing your dreams. Know that there is no place in the game for this. Football is a game for everyone no matter of who you are, what colour your skin is or where you come from.

“To @instagram I don’t want any child or adult to have to receive the hateful and hurtful messages that I’ve received. I knew truely being who I am that I was going to come across this. It’s a sad reality that your platforms are not doing enough to stop these messages.”

Cavallo finished his post by thanking those who had sent him messages of love and support, saying they outweighed the negativity, and praised people who “reached out after making a stand at the game. I commend you. Thank you to those fans, you had me emotional. Love will always win.”

Adelaide United, Melbourne Victory and the Australian Professional Leagues, who are in charge of the A-Leagues, have all been contacted for comment.

Cavallo has previously said that playing before coming out as gay made him feel as if he was leading a double life, and that he wanted to set an example for other footballers experiencing the same troubles.