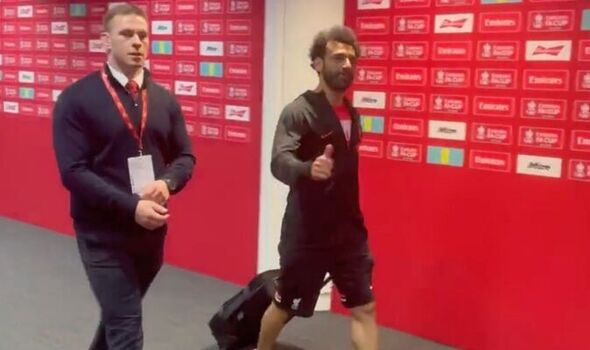 Mohamed Salah has declared himself fit for the Champions League final in Paris and the Egyptian even sported a big grin as he offered journalists reassurance he will be ready for the May 28 showpiece. The Liverpool forward, who is this season’s Premier League top goalscorer with 22 goals, went to ground holding his groin after just 30 minutes of action at Wembley against his former side Chelsea.

Salah was taking no chances either and following consultation with Liverpool physio Chris Morgan, the 29-year-old left the field and was replaced by Diogo Jota.

With Liverpool now just two weeks away from the Champions League final, there was obvious concern their star attacker may not be fit for the meeting with Real Madrid.

However, Salah has confirmed he’ll be ready for revenge against Los Blancos: “Of course, all good,” he said, when quizzed on his fitness prospects.

Jurgen Klopp is optimistic both Salah and Virgil van Dijk, who also went off with a minor issue, are going to be fine.

He told ESPN: “I think [Salah and Van Dijk] are kind of OK. I don’t think they will be ready for Tuesday, to be honest…

“I don’t think they would have been ready for Tuesday anyway! But I think they are alright, it was more of a precaution.”

Liverpool are understood to have confirmed that Salah was suffering from a “sore groin.”