A group of death, a quartet of big names, but Liverpool are through to the Champions League last 16 with two games to spare, top of the group and a 100 per cent record, following a 2-0 win on Wednesday night.

Jurgen Klopp made a couple of big calls even before kick-off against Atletico Madrid, a clutch of names coming into the team who either haven’t been recently – for different reasons – or simply aren’t first choice.

Some were rather easy to call no doubt, and rather important. Fabinho, for instance.

His absence had been a huge factor of late for the Reds in conceding twice against Brighton in particular, but even in the early stages of the Manchester United match when the home team created openings.

The No3’s return to the side against the Spanish outfit was immediately noticeable: clattering into a prone Rodrigo de Paul, letting him know that ownership of the midfield zone was not up for debate, then thundering into another challenge to clear the ball and stop a counter-attack. Both approaches, the snide and the certain, are necessary at the top end of the game and without him, Liverpool don’t possess another with quite the same level of ability to do either.

It shouldn’t be considered that Fabinho only brought the dark arts back to the Anfield pitch though, with his passing range a vital addition and his organisation on show as soon as possession was squandered elsewhere.

If his return set the platform for the defensive work – and a clean sheet – then it was a player from much closer to home who orchestrated the win.

Trent Alexander-Arnold assisted both the first-half goals with two deliveries of very different styles, but equally effective and accurate.

His first was the typical delivery of both the right-back and the team: a neat triangle down the channel, set back to him in space just outside the box and a clipped, curling, first-time delivery into the most dangerous and difficult-to-defend of areas. Diogo Jota was the beneficiary; each of the other front men have been from the exact same cross many times over.

The second was a more driven, much lower and riskier ball. There’s an argument to say it was a shot, and not a very well-directed one if so, but it’s hard to look at Alexander-Arnold’s repertoire of immediate deliveries into the area and unilaterally declare this was not one of them.

He, along with Jordan Henderson and Mohamed Salah, tormented Atletico’s left flank all night.

Fabinho and Alexander-Arnold are non-negotiable components of Klopp’s strongest side, and at Anfield they showed many of the reasons why – but so too showed up a clutch of the more regularly sidelined squad options.

Alex Oxlade-Chamberlain improved the longer the game went on, finding form and confidence with frequent, explosive bursts past several Atletico midfielders. Kostas Tsimikas produced an energetic and direct showing of his own, affording Andy Robertson a much-needed rest and giving the team almost every attribute the Scot would in any case. And, perhaps most importantly from a longer-term perspective, Thiago Alcantara made his return from injury. 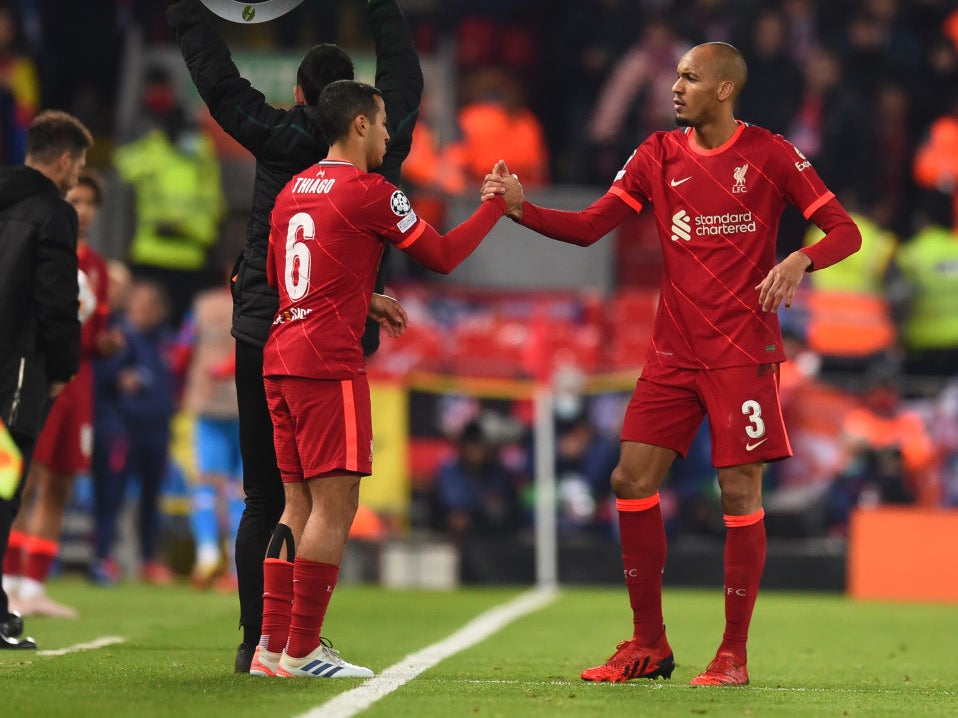 The Spaniard not only has the talent the Reds would love to call upon in more matches than he has been available for, but the centre of the park has been the area hardest-hit by a spate of early-season injuries. Even if Oxlade-Chamberlain, subbed late on after an apparent knock to his knee, has to sit out at the weekend, it’s a net-positive return for Klopp in that area of the pitch this week.

And so a group stage has been navigated, far easier and far earlier than is usually the case for this team.

Four wins from four, the luxury to rest and rotate as the manager sees fit in the final two, safe in the knowledge that top spot in Group B is Liverpool’s no matter what. In the wider context of chasing the Premier League title as well as European glory this season, that could be the biggest prize of the night. Fabinho’s return might have come in Europe, but he hasn’t started a domestic game in over a month – his performance here showed why his continued presence will be so important in trying to haul in Chelsea over the next 28 matches.