Mohamed Salah smashed in an excellent goal on the turn to open the scoring in a pulsating first half that perhaps should have seen more goals.

Callum Wilson was denied what would have been his own equaliser when his injury-time goal was chalked off for handball before fellow sub Willock smashed home with the last kick of the game.

The result means the Reds miss out on the chance to return to the top four in a boost for the likes of Tottenham, West Ham and Chelsea in the race for a Champions League spot.

Newcastle move nine points clear of Fulham at the bottom and can almost certainly begin to prepare for life in the top flight next year.

Here are five things we learned from a rollercoaster game at Anfield.

In a match which should have seen many more goals fly in, particularly during the first half, Mo Salah proved why he is considered one of the top forwards in world football.

Just three minutes into the game, the Egyptian excellently held off Matt Ritchie to elegantly control the ball on the turn before thumping it into the top corner with his second touch. 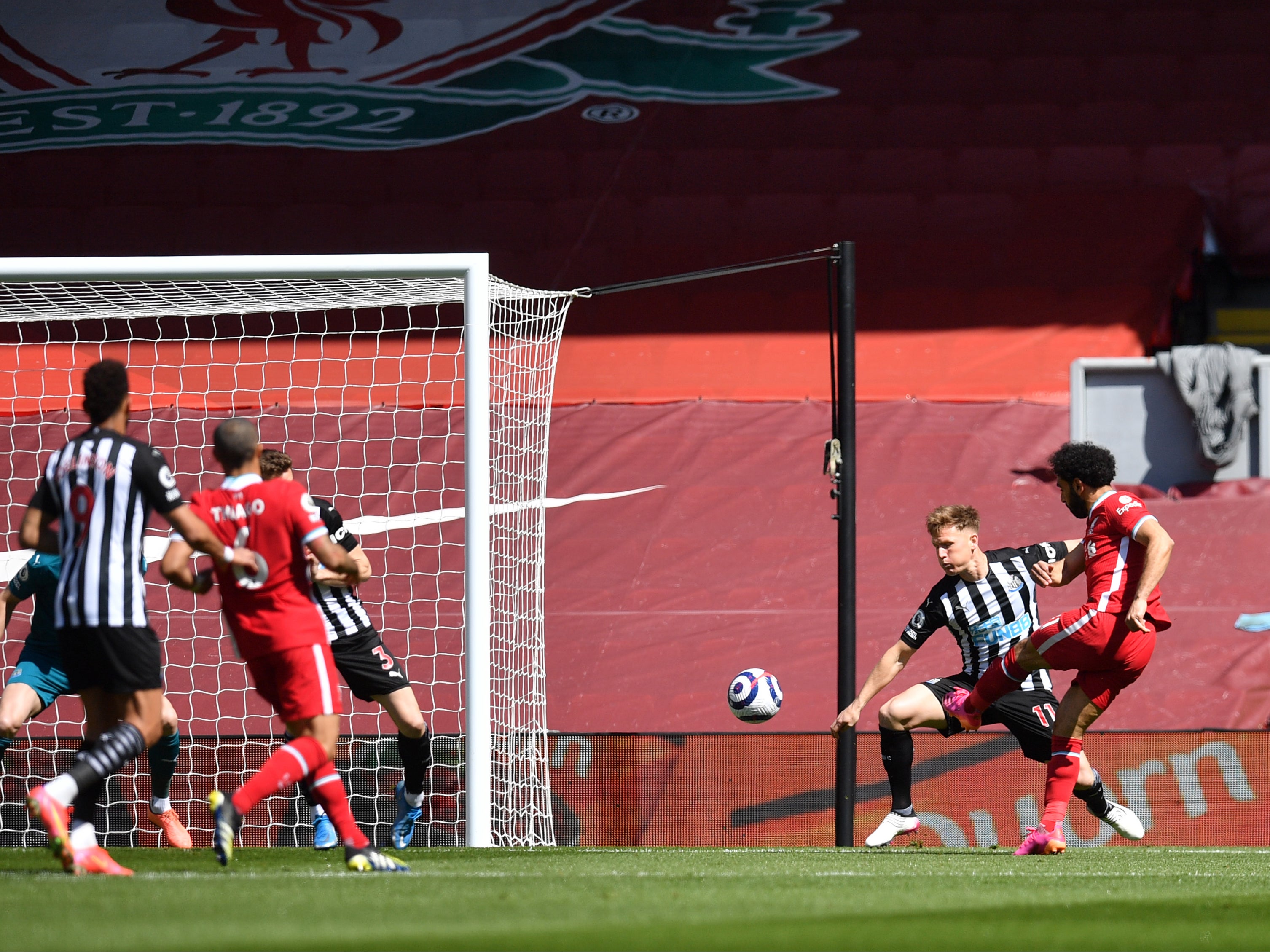 In 2021, Liverpool have taken over 140 shots at Anfield and scored just four times.

The Reds have dropped from the second-highest scoring team in 2019/20, and their inefficient form in front of goal was on full display against Newcastle.

While Salah scored a sensational goal early in the game, the Egyptian missed an excellent chance when one-on-one with Martin Dubravka.

Diogo Jota and Sadio Mane also missed a handful of chances each on a poor day for Liverpool forwards as Newcastle made numerous mistakes at the back.

Newcastle are a real threat on the counter

While Liverpool missed plenty of chances and dominated possession, Newcastle can take solace in the fact that they were certainly a threat on the counter attack.

The pace and trickery of Miguel Almiron and Allan Saint-Maximin wreaked havoc on the Reds defenders, and on another day the Magpies may have found the net and earned a positive result.

Joelinton, who found some goalscoring form recently, played well and made some incisive runs in behind Ozan Kabak and Fabinho but his finishing left much to be desired.

This is the Thiago that fans expected

When Liverpool signed Thiago from Bayern, fans and media alike were excited about the prospect of adding one of the world’s top midfielders to a team that won the Premier League last season.

However, the Spaniard has seemingly struggled to adapt and has been criticised for simply sitting back and passing the ball from side-to-side.

Against Newcastle, Thiago was excellent – he effortlessly sprayed passes around the pitch and drove the Reds forward.

He helped them control possession and dominate the midfield as they tried to break down a stubborn – but certainly not mistake-free – Newcastle defence.

Can Newcastle keep Saint-Maximin this summer?

The French forward is clearly the Magpies’ best player, driving forward with real flair and skill that no other Newcastle players possess.

The talent surrounding him is not on his level, while the Newcastle defenders are lucky that this was only 1-0 after producing regular mistakes at Anfield.

It will be interesting to see if the club can hold onto Saint-Maximin in the upcoming transfer window, as his performances will certainly have attracted interest.