Andy Robertson has detailed how a hamstring problem stopped him taking a penalty for Scotland. Steve Clarke’s side will now face England, Czech Republic and Croatia next summer in Group D at the European Championships, as they make their first appearance in the tournament since Euro ’96.

They had to do it the hard way though, winning 5-4 on penalties in Belgrade following a 1-1 draw after 120 minutes of gruelling action.

Ryan Christie had given Scotland the lead before Real Madrid striker Luka Jovic struck a late equaliser in the 89th minute.

David Marshall saved from Aleksandar Mitrovic in the shootout to get Scotland over the line and after the match, Scotland captain Robertson paid tribute to the Derby goalkeeper and his colleagues for their incredible spirit.

The Liverpool left-back also revealed he decided against taking one of the five penalties due to a hamstring issue, sparking injury fears. 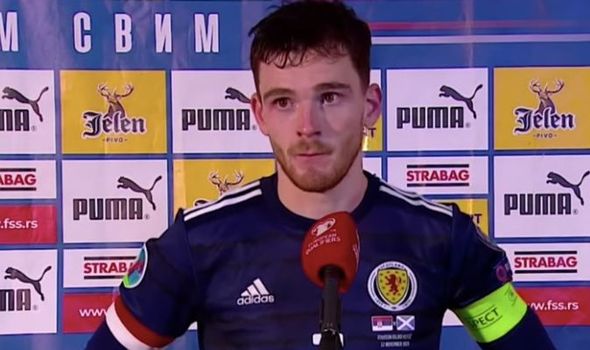 When asked whether he was in line for a penalty in sudden death, Robertson told Sky Sports: “I think I was next or seventh but my hamstring seized up.

“Then in the second half of extra-time I had a bit of cramp, it was my left one as well so I was just a bit worried it was going to cramp up.

“The lads taking penalties were unbelievable and like I said, when Marshy’s [David Marshall] in goal you always back him to save one.

“What a night, it’s so hard to explain how I feel emotionally.

“There will be tears everywhere and these lads deserve it. Forget about me, I’m just the boy that’s so lucky to work in front of all of them.

“I lead them out but my god, the boys are something else out there. We are going to celebrate and we’ll look forward to the summer now.”

Robertson appeared to pull up in the final stages of Liverpool’s 1-1 draw at Manchester City last Sunday, but soldiered on to complete the game.

He remains the only fit member of Liverpool’s first-choice backline as Reds boss Klopp tackles an injury crisis. 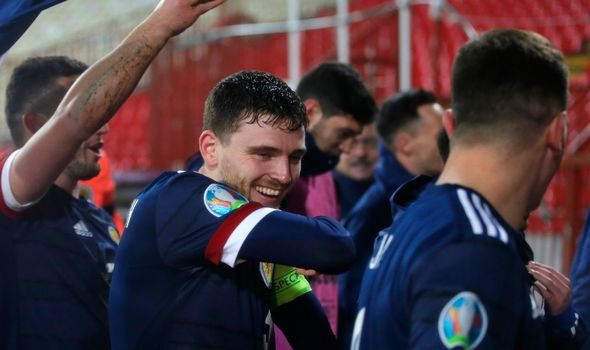 The Premier League champions have been rocked by the news that Joe Gomez is set for a lengthy spell on the sidelines after picking up a knee injury in England training.

Gomez is alleged to have gone down unchallenged according to Gareth Southgate and Liverpool have since confirmed the defender has undergone successful knee surgery.

He joins Virgil van Dijk on the road to recovery with the Dutchman expected to miss the entire 2020/21 campaign after tearing his anterior cruciate ligament in last month’s Merseyside derby.

Trent Alexander-Arnold is also set to miss around four weeks of action after hobbling off with a calf problem at the Etihad Stadium.

Klopp will be hoping Robertson returns to Merseyside in one piece with Scotland now set to face Slovakia and Israel before Liverpool’s showdown with Leicester on November 21.