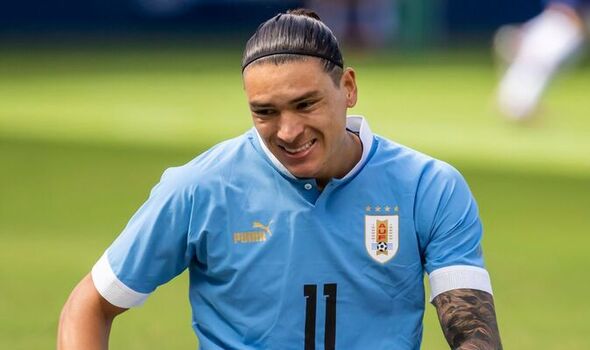 Darwin Nunez is expected to travel to Merseyside next week to undergo a medical ahead of his £85million move to Liverpool from Benfica, according to reports in South America. The Uruguayan international striker, who is currently away with his country following the conclusion of Benfica’s season, is now on verge of sealing his mega-money switch to Anfield with a deal ‘all agreed’ between the two clubs.

Nunez quickly emerged as Liverpool’s top attacking target as they continue to negotiate the exit of Sadio Mane with Bayern Munich after already rejecting two offers from the Bundesliga giants.

Now Liverpool are on course to land their man following a swift week of negotiations that have seen the transfer move quickly.

According to TyC Sports reporter Cesar Luis Merlo, Nunez is expected to arrive in England as soon as next week to undergo a medical and complete his move to the Premier League.

The report suggests everything is now in place between Benfica and Liverpool, who will pay £68m up front and £17m in add-ons.

Nunez is also set to pen a five-year contract at Anfield, where he is expected to lead the line next season under Jurgen Klopp.

The German has made no secret of his admiration for the forward, who he labelled “a good-looking boy” during his praise for the 22-year-old, who netted in both Champions League quarter-finals against the Reds.

There had been some suggestion that Manchester United were ready to rival Liverpool for the 34-goal striker but Express Sport understands the Red Devils are focused on other targets.

After Manchester City’s capture of Erling Haaland, Liverpool have shown they’re willing to spend big in order to edge their rivals to the Premier League title next season.

They have also had recent success in recent times when signing players from Portugal following the £37.5m capture of Luis Diaz from Porto in January.

The winger has needed no time to settle since arriving at the club, which will have only increased Liverpool’s confidence that Nunez can also cut it in the Premier League if he moves from the Primeira Liga.

Diaz and Nunez were the top goal-scorers in the Portuguese top-flight when Liverpool sealed the signing of the Colombian international.

The Benfica man would then go on to score 26 times in 28 league outings for his side to firmly put his name in the shop window.

Nunez was the subject of strong interest from West Ham during the January transfer window, while Newcastle and Brighton (August 2020 and last summer) have also considered the player.

Yet it soon became clear that he may be out of their reach as his value continued to sky-rocket.

Furthermore, Nunez wants to play Champions League football, something Liverpool are of course able to offer after reaching the final in Paris in May.

There had also been interest from the likes of Paris Saint-Germain and Atletico Madrid but once Liverpool came calling, it was clear they were Nunez’s preferred destination of choice.