Liverpool moved to 76 points from 32 games with title rivals Manchester City on 74 points from one game fewer, with Pep Guardiola’s side hosting Brighton at the Etihad on Wednesday.

United announced earlier on Tuesday that Cristiano Ronaldo would play no part in the match, having announced the tragic death of his newborn twin son the previous day.

The Liverpool fans saluted the Portuguese superstar in the seventh minute, in tribute to his famous jersey, applauding and singing the traditional Reds anthem You’ll Never Walk Alone.

Liverpool fans on social media earlier in the day had discussed a fitting show of support, with Gary Neville, as a Sky Sports pundit, describing what they did as a moving tribute.

“It’s a massive touch of class that from Liverpool, and I’m sure if Cristiano Ronaldo is watching he would have welcomed it,” Neville said. 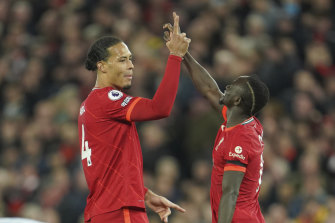 Colombian Luis Diaz gave Liverpool a fifth-minute lead, tapping in from close range after Sadio Mane set Mohamed Salah free down the right and the Egyptian delivered a pinpoint low cross for a simple finish.

United’s problems got worse in the 10th minute when Paul Pogba limped off injured and with Ralf Rangnick’s side struggling to get any foothold in the game, it was no surprise when the home side doubled their advantage.

Mane again provided the spark with a superb first-time pass finding Salah who, having lost his bewildered marker Diogo Dalot, cut in from the right and provided his trademark left-foot finish.

The creator turned finisher in the 68th minute, as Mane made it 3-0 after Andy Robertson broke down the left and then Salah completed the rout five minutes from the end. 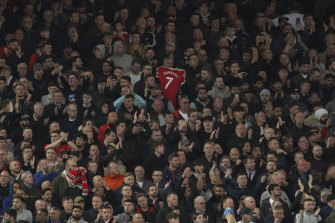 Liverpool fans salute Cristiano Ronaldo in the seventh minute at Anfield in tribute to the Portuguese superstar’s famous No.7 jersey.Credit:AP

Meanwhile, Fulham achieved promotion back to the Premier League with a 3-0 home win over Preston North End which guaranteed the London side a top-two finish in the second-tier Championship.

League leaders Fulham – who were relegated from the top flight last year – now have 86 points from 42 games.

Promotion is worth up to $240 million ($325m AUD), according to last year’s Deloitte Annual Review of Football Finance.

The top two in the division are promoted to the Premier League while the teams that finish third to sixth go into the playoffs to fight for the final spot.

Only Nottingham Forest could have denied Fulham promotion but they are now 16 points behind the Londoners and can get a maximum of 15 more from their remaining five games.

Fulham took the lead through Aleksandar Mitrovic in the ninth minute before Fabio Carvalho grabbed another and Mitrovic completed a first-half rout by finishing off a slick team move in the 41st minute.

The free-scoring Serbian has been key to Fulham’s fortunes, averaging more than a goal per game with 40 strikes this season.