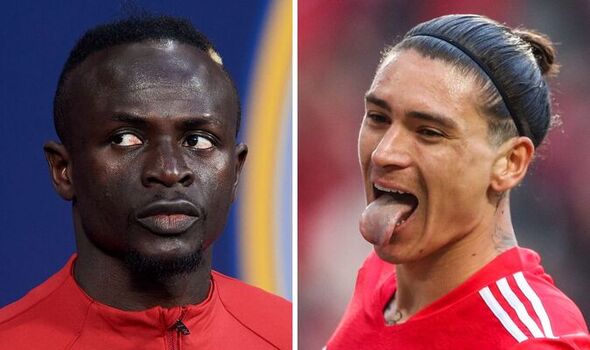 Liverpool can wreck Erik ten Hag’s Manchester United transfer plans while also landing the perfect replacement for Sadio Mane in 34-goal Benfica frontman Darwin Nunez. The Reds are now weighing up all possibilities as they prepare to wave goodbye to their Premier League and Champions League-winning Senegalese star, who has been integral to his side’s success ever since he arrived from Southampton in the summer of 2016 for a fee of £34million.

Anfield chiefs will be looking to recoup north of that figure when they agree to sell Mane, who is the subject of firm interest from Bundesliga champions Bayern Munich as he enters the final year of his Liverpool contract.

Receiving a substantial and respectable fee will only increase their chances of landing a quality replacement in due course – something that will be imperative given Mane’s importance to Jurgen Klopp’s side.

It could be argued that January arrival Luis Diaz is a ready-made replacement for Mane as a right-footed left-winger. The same would also apply to Diogo Jota, despite the deterioration of his excellent early-season form.

But in fact, Mane spent the second half of his final season with the Reds playing as a makeshift centre-forward. Given how well £37.5m winter arrival Diaz has settled – that is where Liverpool should be looking to strengthen before the start of next season.

Manchester United target Nunez could just be the answer and he is a player Liverpool and Klopp know very well from this season’s closely-contested Champions League quarter-finals with Benfica.

The Uruguayan frontman netted in both matches against Liverpool and gave Virgil van Dijk and Ibrahima Konate two tough nights of work with his industry and pressing.

His relentless work ethic and movement meant the two centre-backs were unable to switch off throughout the entirety of both matches. And Klopp was certainly impressed, publicly praising the forward during several press conferences.

At just 22, Nunez is arguably the most attractive striker on the market right now following Dusan Vlahovic and Erling Haaland’s moves to Juventus and Manchester City respectively.

There are a whole host of clubs interested, not least United. It’s been widely reported that Ten Hag would love to bring Nunez to Old Trafford as part of his Manchester United rebuild, as one of the new faces of his project.

He knows all about Nunez’s ruthless streak in front of goal after the Benfica’s man headed home the winner to dump Ajax out of the Champions League knockout stages back in March.

Now the Dutchman believes Nunez would be the perfect acquisition for United in attack and a long-term replacement for ageing centre-forward Cristiano Ronaldo.

Liverpool now have an opening to not only derail United’s plans but to also evolve their very own attack, ensuring they do not sit still.

Nunez will cost a pretty penny but like Mane, he can also play out wide if required. His hunger, desire and ceiling would suggest he is worth taking a chance on.

Klopp has proved time and time again that he is among the world’s best when it comes to developing players and Liverpool’s track record with recruitment speaks for itself.

If they believe Nunez satisfies their criteria when it comes to replacing Mane, United ought to begin devising alternative transfer plans.

Right now, there is a stark contrast and gulf in class between Liverpool and their bitter rivals – not least that one is playing Champions League football, while the other prepares for another Europa League campaign. Nunez will know that all too well when carefully considering his options.