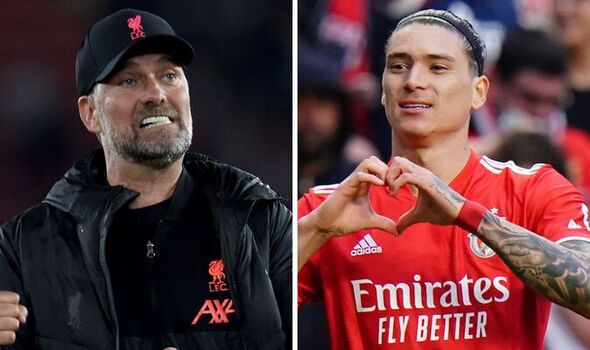 Liverpool boss Jurgen Klopp took a ‘direct’ approach in seeking out Darwin Nunez after the Uruguayan striker scored in both legs of Benfica’s Champions League tie against Liverpool, according to Adel Taarabt. The Reds are one step closer to announcing Nunez’s arrival after Benfica confirmed a fee had been agreed between the two clubs.

Liverpool will pay an initial fee worth £64.1million with £24.3m in potential add-ons. The forward is set to arrive as a direct replacement for Sadio Mane, who is closing in on a move to Bayern Munich.

Nunez is coming off the back of an impressive breakout season in Portugal with Benfica, where he scored 34 goals in 41 games across all competitions. It was in the Champions League where he truly made a name for himself with goals against Barcelona, Bayern and also Liverpool.

Klopp was clearly impressed with Nunez’s displays against the Reds in both legs of the Champions League quarter-final. And Nunez’s Benfica team-mate Taarabt has claimed that Klopp even had a private word with the striker after the tie.

When asked whether he felt Nunez would be able to cut it in the Premier League, Taarabt told talkSPORT: “100 per cent, he showed it in the Champions League you see the two games that he had against Liverpool and he was amazing. Even after the game, the second leg, Klopp goes to him direct and said what a player he is.

“Darwin has a mix of [Edinson] Cavani and [Luis] Suarez, he can jump, he can go behind, for me he’s a mix of both. I mean 34 goals, six in the Champions League, two against Barcelona, Bayern Munich and two against Liverpool and he’s 21-years-old.

“So the most important thing is he keeps his head and he’s focused and I think the only thing [problem] that could happen for him in Liverpool is the language barrier. I like the strikers that are selfish, that when they’re in front of goal they just want to score, just finish, and he has that, if he doesn’t score he’s not happy.

“But he was helpful for the team. He works so hard, he’s fit, if you see his body he’s a real athlete, he’s a machine, so for me in the Premier League he will score goals for sure.”

While the 22-year-old showed his potential last season in Portugal, he struggled for regular goals in his debut campaign at Benfica. The Uruguay international found the net just five times in 28 league appearances, although he showed his playmaking abilities with 10 assists.

Nunez predominantly played through the middle for Benfica, but was also often used out wide on the left.