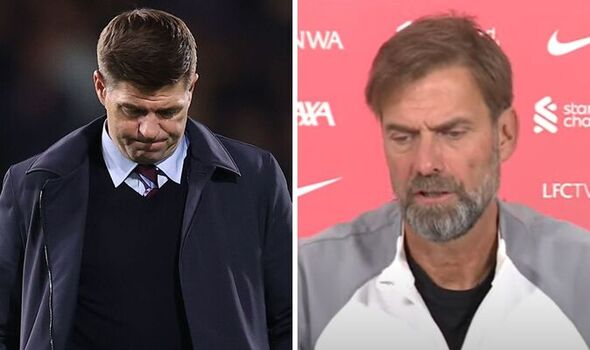 Jurgen Klopp has admitted he had a brief “exchange” with Steven Gerrard this morning after the Liverpool icon was sacked as Aston Villa manager. Pressure had been mounting on Gerrard at Villa with just two league wins from their opening 11 league matches.

And Thursday night’s 3-0 defeat to Fulham proved to be the final straw with Villa announcing shortly after the game that they had parted ways with the 42-year-old. It’s the first time in Gerrard’s short managerial career that he’s been moved on having impressed during his time in charge at Rangers.

What comes next for the Liverpool legend remains to be seen, but Klopp has indicated that he wants to see Gerrard take a bit of time away from the spotlight. When asked whether he felt Gerrard will be able to bounce back from his sacking as Villa boss, Klopp replied: “I’m very sure he will come back from that.

“I’ve had seven years in Liverpool with not meeting very often for different reasons with America and then when he was in the academy we could create a bit of a close relationship and I’ve always followed. We had a little exchange this morning but nothing too deep or not a long conversation.

“I can imagine it’s a disappointment for him because with the ambitions he had and the things he wanted to achieve with Aston Villa. But I don’t think we have to worry about Stevie. He said himself yesterday, he knows the game long enough and these kind of things can happen.

“Always in life, we all get knocks here and there, it’s all about how you respond. You all know Stevie better than I do and he always came back and he will come back from that, no doubt about that. Things like this can happen.

“A lot of great managers out there had to leave their previous clubs for different reasons, some of the best did that quite frequently during their career and showed up somewhere else and learnt from it, found a better situation.

“He will be back 100 per cent, but now I hope he takes a bit of time as well for him because since he’s finished his career, he’s pretty much working all the time. Maybe use it now a little for himself to recharge.”

Liverpool are back in action tomorrow when they face Nottingham Forest with the club looking to continue their winning run. There’s some uncertainty on whether Klopp will be in the dugout at Forest though after he was charged with a breach of FA rules E3 for his red card against Manchester City.

But the Liverpool boss has explained that he currently expects to be on the sidelines as normal.