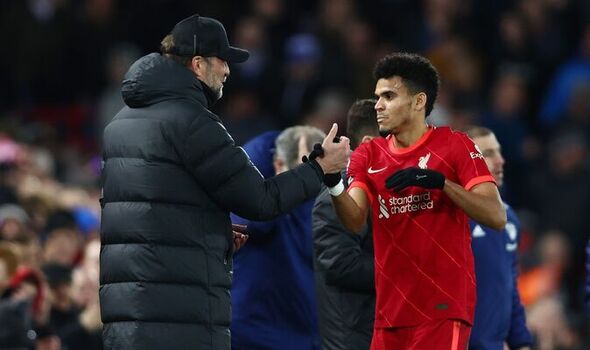 Liverpool manager Jurgen Klopp hailed Luis Diaz’s immediate impact, describing the January transfer arrival as a “really special” player. The Colombian international sealed a move from Porto in a deal which could go up to £50million.

But the dynamic winger is proving to be worth every penny as he has slid seamlessly into the Premier League title chasers’ frontline. While Klopp normally prefers to slowly embed his new signings into his side, the former Borussia Dortmund boss handed Diaz his first 90 minutes at the first opportunity.

He has contributed two goals in his first six Premier League appearances for the Reds, including a brave goal against Brighton and Hove Albion which saw him get kicked in the chest by Seagulls’ keeper Robert Sanchez. As well as his evident courage, Klopp has also been blown away by the speed in which he has been able to ingratiate himself in the team.

“With Luis, where it has been really special is that when we saw him we knew that he would fit in immediately,” Klopp said in an interview with Sky Sports News. “That is really difficult usually but because he did not have to change, that is why we have a really confident boy here.

“He was in a really good moment with Porto, playing good for Colombia, and so he came here full of confidence. But what we tried to make sure is that he does not lose that because of the playbook as we tell him that he has to do this and he has to do that.

“You don’t expect miracles immediately from these kind of players. “But he is not far away from doing exactly that. Long may it continue.” Diaz’s arrival came in the early stages of a Liverpool winning streak which has since amassed to ten Premier League matches. This incredible period of form as seen Klopp’s men reduce Manchester City’s lead at the top of the table to a singular point.

Moreover, he has also already won the League Cup with the Merseysiders and is still in with a chance of adding the Premier League, the FA Cup, and the League Cup to his first season honours at the club. And with the contracts of Sadio Mane, Roberto Firmino, and Mohamed Salah all expiring in the summer of 2023, Diaz may be required to take up even more responsibility at Anfield.

Contract talks with Salah have reportedly stalled in recent weeks, while there have been very few updates on the contract situations of Mane and Firmino. Fortunately for the Reds, they have Diaz and Diogo Jota to fall back on should there be a terrifying attackers’ exodus at Anfield.