Leicester City welcome Burnley to the King Power Stadium in the Premier League on Sunday evening.

Brendan Rodgers’ side started the new campaign in emphatic fashion, defeating West Brom 3-0 last weekend as Jamie Vardy scored twice from the penalty spot, after such a disappointing end to last season.

Meanwhile, tonight marks the beginning of Burnley’s new campaign, while Sean Dyche’s frustration over the club’s activity – or lack thereof – in the transfer market continues to cause unrest. Follow all the action below:

Burnley get us underway!

The players are out at the King Power. Let’s hope the final game of the day lives up to what we’ve seen so far.

Young defender Jimmy Dunne makes his Premier League debut tonight, so it’ll be interesting to see how he does alongside Kevin Long. Burnley are without both James Tarkowski and Ben Mee.

Burnley manager Sean Dyche: “Even with the challenges we have got in the squad, with injuries, we go to Leicester I think with a confident group. We plan on winning down there. We want that winning mentality, it’s not an easy thing, especially going to these clubs, but that is our expectation – to go in there with a winning thought, and I think we do that well.”

Leicester boss Brendan Rodgers, speaking to the BBC: “It was important that in pre-season we got together and renewed our motivation for this season. It’s always important to win after winning. We had a period last season when were consistently very good, so it’d be nice to win here.”

Now to the King Power Stadium, where Leicester will hope to build on a positive start to the season.

Burnley, after a strong end to last season, will be looking to avoid any kind of stagnation, though that could be difficult given their lack of summer signings. 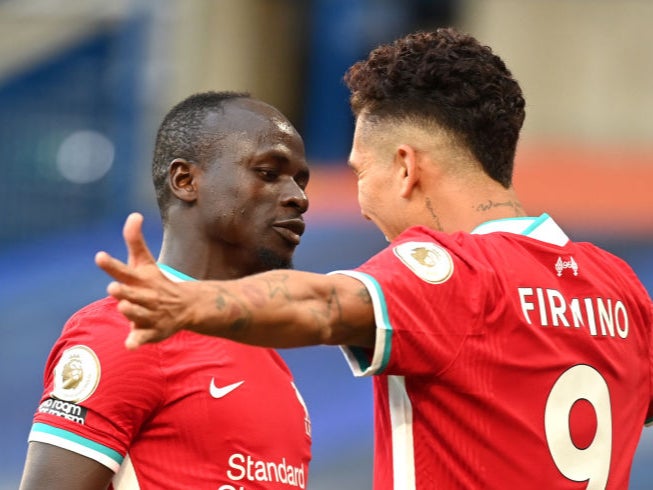 Chelsea 0-2 Liverpool: The Reds capitalised on their man advantage after Andreas Christensen’s red card for a foul on Mane

The Merseyside rivalry might be a little more interesting this season…

Sadio Mane speaks to Sky  Sports after his match-winning brace: “I think it was a tough game, especially in the first half. We found it very difficult to create chances. The red card made it easier, but today we deserved to win.”

The fourth and final game of the day sees Leicester host Burnley, who are yet to get their season underway.

For Brendan Rodgers’ side the aim will be to at least match last season’s achievements, and they started well with a 3-0 win at West Brom last weekend.

Burnley, meanwhile, will hope Sean Dyche can overachieve once again given a quiet summer and a lack of new additions to his squad.