Have Leeds found the new Wayne Rooney? Highly rated Leeds forward Joe Gelhardt has drawn comparisons to the former England captain as he looks to force himself into Marcelo Bielsa’s starting XI

‘Joffy’ Gelhardt has the same build, dribbling ability and fearlessness that first made Rooney a star and is also represented by his management agency.

‘Very few players stand out at 14. Steven Gerrard did in my first season, Rooney and certainly Joe,’ says long-time Merseyside Boys’ manager Tim Wyatt. ‘I remember him turning up for our trial looking Rooneyesque. He scored three in 10 minutes on a cold and rainy night, so I said he could go home to keep warm because he’d already made the team.’ 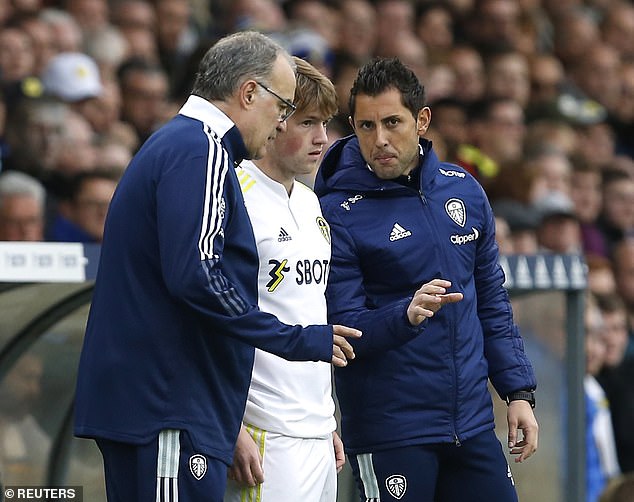 Now it is Leeds getting the Joffy buzz. In a Premier League dominated by athletes, the impact of a street footballer who uses trickery to beat defenders has been huge. The 19-year-old’s mazy run against Wolves last Saturday to earn Leeds a match-saving penalty has led to calls for him to be given a first start at Norwich today.

It is ironic that the player who has given up fizzy drinks to meet Marcelo Bielsa’s fitness demands should be the one stopping their season from going flat.

Gelhardt was born in working-class Netherton, four miles from Rooney’s Croxteth, and was made in Wigan, after he joined their academy aged 10 having been overlooked by boyhood heroes Liverpool. He grew up kicking a ball from dawn to dusk, with mum Lynne ferrying him from the family home to matches for Chesterfield High School, Sefton Boys, Merseyside or Wigan.

‘Joffy was a throwback. He’d have a youth game in the morning and then go off to play with his mates,’ says Wigan’s head of academy Gregor Rioch. ‘A lot of kids stay home on PlayStation. He loved the fresh air. On the pitch, he had an ability to find space in tight areas and beat players one on one. He had the X-factor.’ 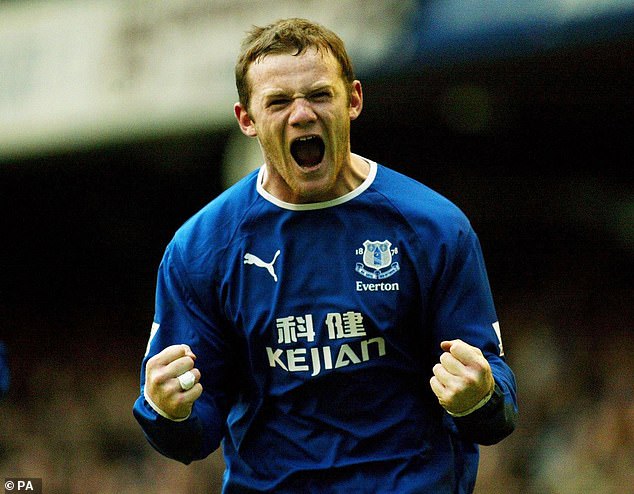 Due to his build, dribbling ability and Liverpool roots, Gelhardt has been compared to a young Wayne Rooney (pictured)

Part of the appeal is that he did not look like an archetypal modern footballer; short, chunky and gifted rather than a middle-distance runner. Even his nickname is different, universally known as Joffy based on the film Coming to America.

Young Joe liked the movie so much his uncle adapted one of the character’s names King Jaffe Joffer, and it stuck. The profile information on his mum Lynne’s Twitter pages reads: ‘Mother of 2 gorgeous boys Joffy and Daniel.’

At Wigan, they often refused to give out his name to eagle-eyed scouts because he was becoming so prodigious.

He scored 10 in an U-14s game against Huddersfield. The following year, he tormented Manchester United U15s featuring Mason Greenwood by scoring four in a 6-2 Wigan win. England took the unusual step of selecting him from a stage three academy for their U15s team and he has been picked in every age group since up to the U21s. The family suspect their ancestry is German — they have not researched the Gelhardt lineage — but his future is with the Three Lions. 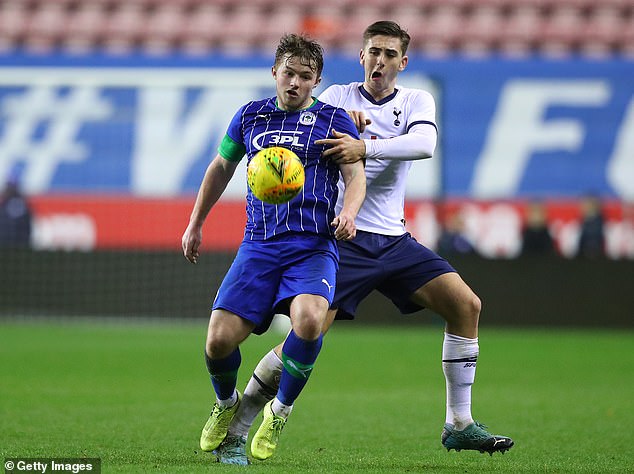 Due to financial difficulties, Wigan were forced to sell Gelhardt (left) last year for £1million

Wigan’s professionals were astonished when 16-year-old Joffy regularly dribbled past them in training without a care in the world and scored his first senior goal at 17 and three months against Hull, finishing with a Cruyff turn and smash into the roof of the net.

‘Most of the lads called him Wazza because there were so many similarities in his stature and style,’ says former team-mate Chey Dunkley, now at Sheffield Wednesday. ‘Because he was left-footed, a few others preferred to shout Shaqiri! In front of goal, I also thought he had a touch of Jermain Defoe because he could strike the ball so well without a backlift.

‘He wasn’t arrogant but not shy either. He felt he was good enough to start for us every week. We had a few Scousers in the dressing room and he could handle all the banter, even at his young age.’

Wigan’s fight with relegation and administration meant they had to sell their crown jewels quickly in 2020 to save the club. Plenty of teams including Leicester, Spurs and Everton were looking at Gelhardt but Leeds moved quickest to snap him up for £1million.

At Elland Road, the hard work had to really begin to get Gelhardt equipped for ‘Bielsa-ball’. Drink and diet intake have been managed and weight tests and skin folds taken daily, with pictures sent to the club nutritionists. 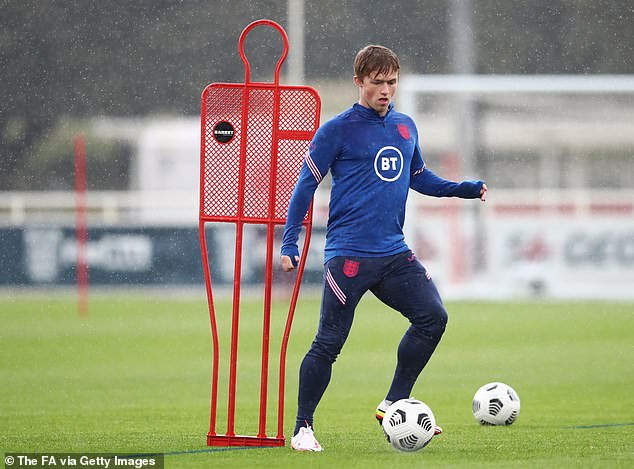 Even Gelhardt’s holiday breaks are spent with a personal trainer or running through the streets of Liverpool to keep fit. It has helped him to shed more than a stone.

‘I’ve had to make a few sacrifices, water instead of fizzy drinks and I’ve lost eight kilos,’ he says. ‘I feel leaner, which you need at Leeds, otherwise you’ll be knackered with the training we do. You can’t be going out drinking or eating rubbish.

‘I used to run a maximum of eight or nine kilometres a game in the condition I was in before, my average last season was 10.5. All our lads are machines and out on the pitch, you’ve got to be ready for a war.

‘We feel the benefit in the last 20 minutes of matches when we see the opposition going down with cramp and feel like “We are going to run all over them”.’

Gelhardt’s rise at Elland Road has been timely, with main striker Patrick Bamford injured. He marked his debut against Fulham on September 21 by lashing home a penalty in a winning shoot-out in the EFL Cup. 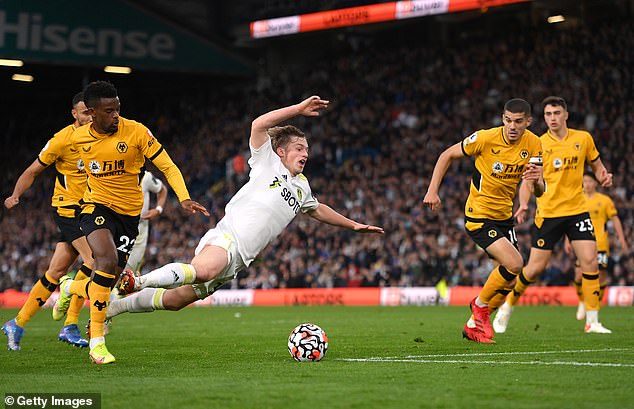 Last Saturday, he saved Leeds from defeat, forcing a brilliant save from Wolves goalkeeper Jose Sa and then panicking ex-Barcelona defender Nelson Semedo into a foul that saw Rodrigo convert the spot-kick.

The next step is for him to get on the scoresheet more regularly in senior football. He scored 19 times in 21 appearances for England between U15s and U18s and last season hit 11 goals from a variety of positions for Leeds U23s, who won the Premier League 2 title.

Though he will never have the blistering pace of his boyhood idol Fernando Torres, he does have the intelligence, left foot and link-up play of current hero, Lionel Messi.

Former team-mates are watching his rapid progress in admiration, with Dunkley adding: ‘Everyone at Wigan knew he was going to play in the Premier League. Bielsa likes young players and Leeds is the right club for him.’