This may be a new Milan, one that does not yet carry the aura of old, but you can never count the grand names of European football out. With only two minutes of stoppage time remaining, Manchester United had an one-goal advantage to take to San Siro, a clean sheet and healthy prospects of coming through this challenging last-16 tie to reach the Europa League quarter-finals. Then came Simon Kjaer.

A late header and away goal by the Milan defender capitalised on slack set-piece defending to level the score at 1-1 on aggregate and give the Serie A side the upper hand in this glamour tie ahead of next Thursday’s return leg in Lombardy. It was no less than their play warranted in truth, with Stefano Pioli’s men at least equalling United over the course of the 90 minutes.

Amad was close to being the story. His deft, flicked header to score his first goal in United colours after coming on as a half-time substitute was special and will live long in his memory. His team-mates and Ole Gunnar Solskjaer, on the other hand, will not think back on this too fondly, especially if they ultimately do not progress. This was not a vintage United performance and ultimately, it got what it deserved.

The first half ended with both teams wondering how they were not ahead, though for very different reasons, and it began with a United reprieve. Franck Kessie scored what appeared to be a perfectly good 11th-minute opener, taking advantage of some slack marking to chest the ball down from a throw-in, turn towards goal on the edge of the penalty area and toe-poke a dipping shot out of Dean Henderson’s reach.

Milan’s players had celebrated and returned back to their own half by the time they realised that VAR was reviewing the goal. Then came the howl of derision when it was disallowed. Handball was the offence but it was far from clear-cut, with the ball appearing to brush the outside of Kessie’s left arm as it rose up his chest. Nevertheless, it was enough to let United breathe again.

And yet, they did not heed this early warning. Milan maintained their early pressure, dominating the midfield battle and repeatedly flooded the final third with white shirts. Converting this superiority into goal-scoring opportunities proved more difficult. Rade Krunic had the best of them after being found by Brahim Diaz, though he fired tamely and straight at Henderson. 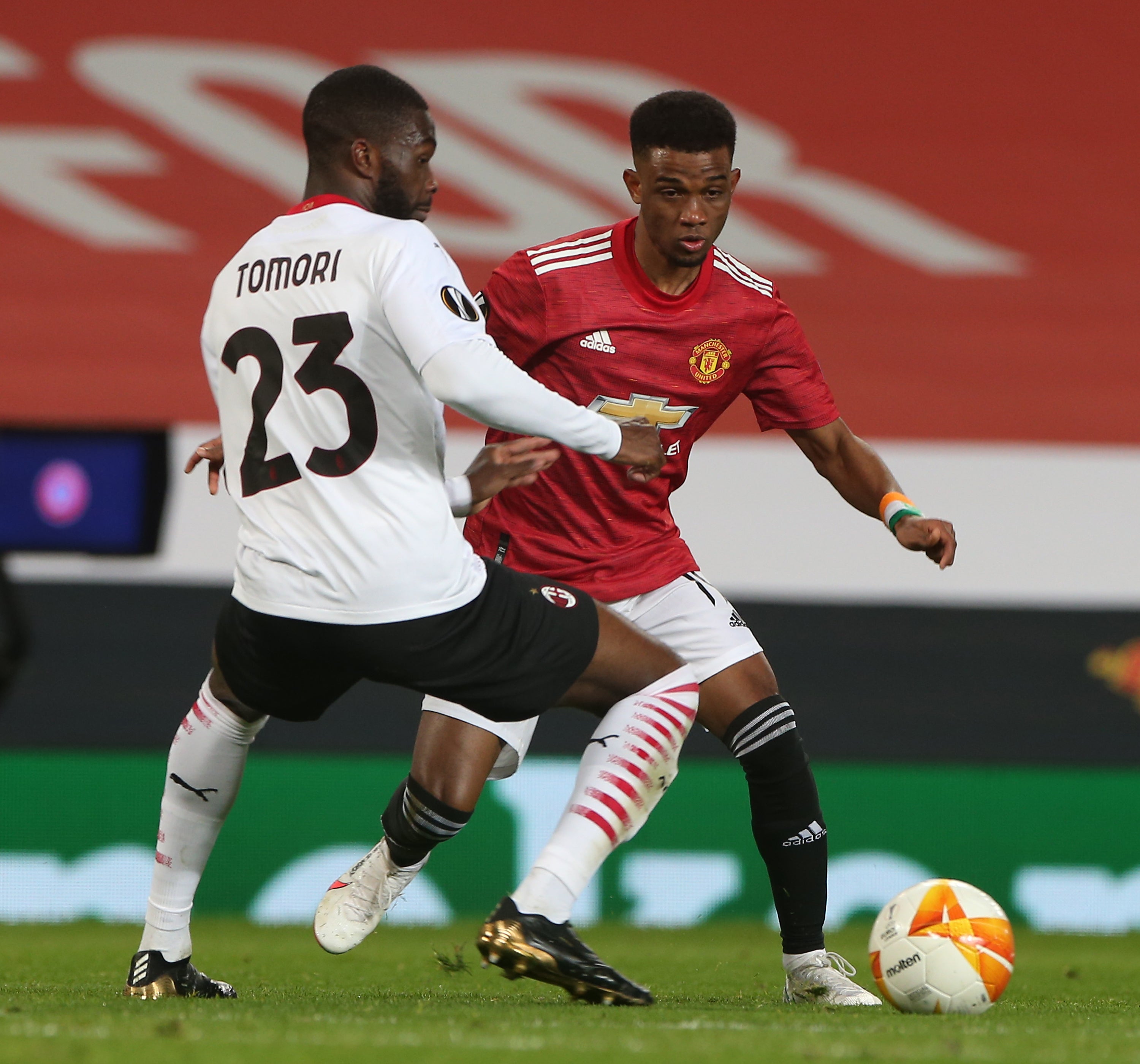 Amad in action with Fikayo Tomori

Ironically, while Milan were playing well and struggling to create, a desperately poor United would have one gilt-edged chance. It was harder for Maguire to miss, even when accounting for the speed that the ball was travelling after Bruno Fernandes’ flick-on of an Alex Telles corner. Yet somehow, unmarked at the back post with an open goal to aim at and from a yard out, he nudged it against the inside of the post and clear.

Maguire is usually the first to register his displeasure when a team-mate passes up such a presentable opportunity. This time, he muffled a quiet expletive under his breath.

The United captain knew he had messed up and the miss summed up his side’s half.

It was no surprise that Solskjaer looked to his bench at the break and that he called upon Amad was a mark of the impression that the 18-year-old has made at Carrington since his £37m arrival from Atalanta at the turn of the year. 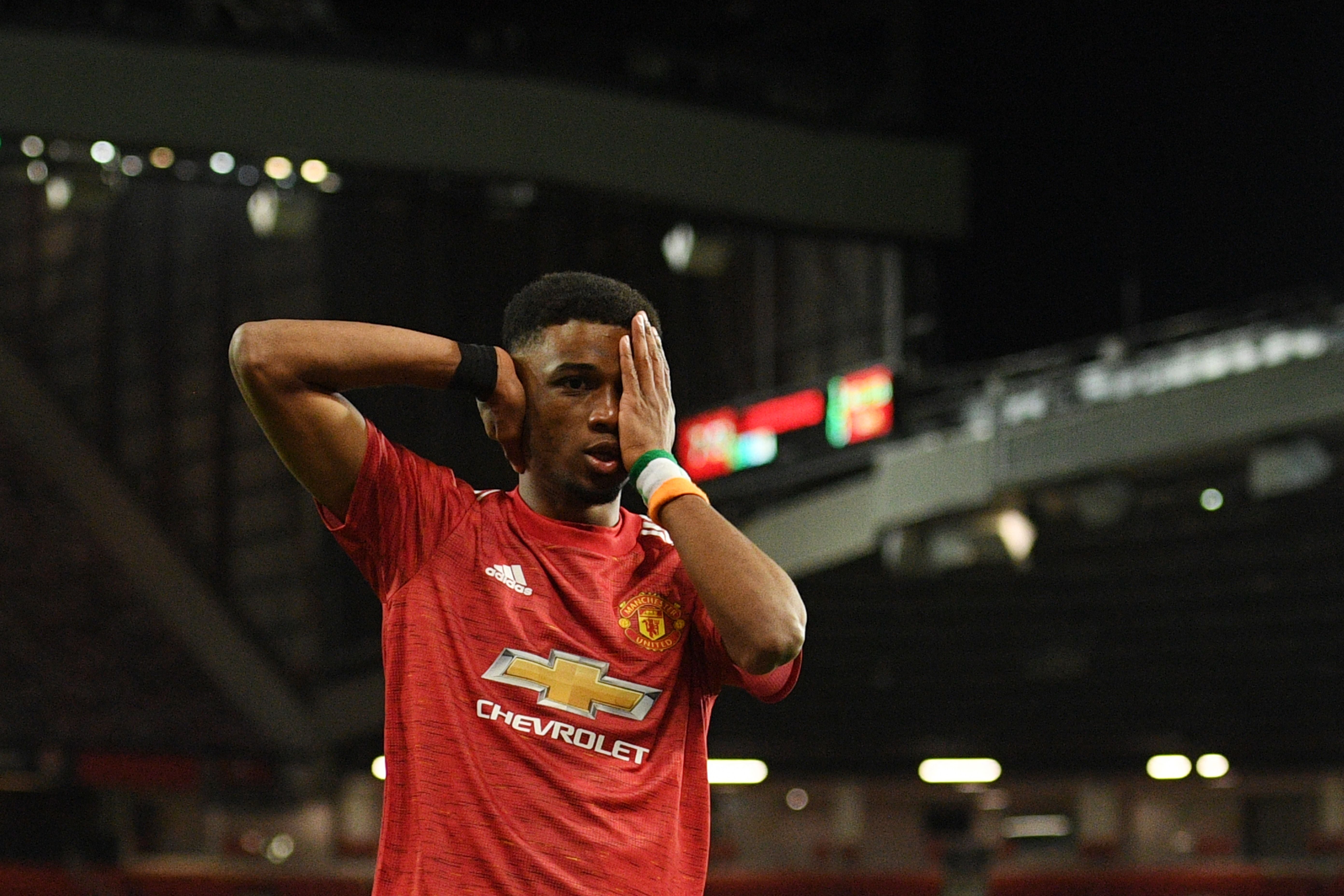 Amad’s precocious talents had only been seen in glimpses on the pitch up to this point but he was about to make an instant impact and deliver his first memorable moment in a United shirt.

After turning to face Fernandes’ ambitious lofted pass down the gut of Milan’s defence, and despite standing just 5ft7in tall, the youngster read the flight of the ball perfectly and rose in front of Gianluigi Donnarumma to flick a majestic, backwards header over the Milan goalkeeper but underneath the crossbar.

Milan were not done though and, on the balance of play, did not deserve to be behind. Kessie threatened again, with a low shot at the near post that Henderson was equal to, and Krunic miscued once more when presented with a free header by David Calabria’s devilish cross.

United appeared to have weathered the storm and largely kept Milan at arm’s length during the closing stages, limiting them to mere half-chances. Yet a combination of poor marking and Henderson’s positioning on the final corner of the game allowed Kjaer to first out-jump the United defence then power a header through the goalkeeper’s hands. Having come close to a creditable win, Solskjaer and his players have work to do next week.