The Matildas have suffered an injury blow before their blockbuster match against the USA with key defender Alanna Kennedy almost certain to miss Saturday’s game at ANZ Stadium.

Despite travelling to Australia after gaining leave from Women’s Super League club Manchester City, Kennedy won’t likely feature in either of the two games against the reigning world champions. The centre-back picked up a quad injury last week but travelled to Sydney from the UK in the hope of overcoming the setback. 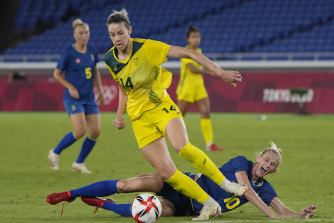 Alanna Kennedy is set to miss the series against USA.Credit:AP

While she admits her chances of playing in either of the two games are slim, Matildas coach Tony Gustavsson insisted on Kennedy being part of the camp. In training, she has been restricted to light work and physio treatment but she said she still found value in the team meetings and tactical sessions.

“I am hopeful to potentially get some minutes but my priority and focus at the moment is getting myself back on the pitch and doing my rehab to get back as soon as possible.”

Kennedy’s likely absence means Australia’s depth in defence faces a serious test. The Matildas have kept just two clean sheets in 14 games this year, leaking a total of 34 goals. Defensive woes have been the key reason for the side’s inconsistent performances.

“At times, it could just be small lapses,” Kennedy said. “We take pride in doing things as a collective so we’ll definitely be focusing on trying to limit goals against or, even better, clean sheets going forward. We are definitely aware of that.”

Kennedy’s injury could spark a reshuffle that will see some of Australia’s least experienced players start against the four-time world champions. If fullback Steph Catley is moved into a central role as expected, it could lead to game time for youngsters Angela Beard, Jessika Nash, Courtney Nevin or Charlotte Grant, none of whom have played more than five international games. Team sources suggest Beard or Nevin are the most likely to get the nod for the first game on Saturday.

Is it the first time Australia have faced the Americans since their defeat in the bronze medal match at the Tokyo Olympics. USA held off a late fightback from the Matildas to claim a 4-3 win in Japan last August, denying Australia their first podium finish. Saturday’s game will also be the first time the Matildas have played at the 83,000 capacity ANZ Stadium, the venue which will host the 2023 Women’s World Cup final.

Meanwhile, the Socceroos path to the 2022 World Cup in Qatar has taken a turn after FIFA confirmed the intercontinental play-off will be a single fixture in June, scrapping the previous home and away format. A draw will be made on Friday to determine who teams from Asia, North America, South America and Oceania will face in the final knockout stage of the 2022 qualifiers.

The Socceroos currently sit third in their qualifying group and are on track to feature in the intercontinental play-offs.

Watch Messi, Neymar, Ronaldo and football’s biggest superstars in the UEFA Champions League with every match streaming ad-free, live and on-demand only on Stan Sport from this Wednesday 15 September.