The Australian striker’s three goals all came within a 26-minute period just before half-time as the London club cruised into the break with a four-goal advantage. England star Fran Kirby began the rout in the fourth minute and capped it with the hosts’ final goal 15 minutes from time at Kingsmeadow on Monday (AEDT). 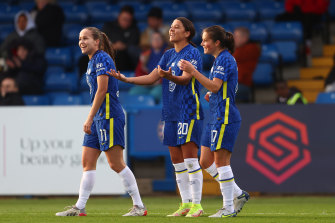 Sam Kerr celebrates after completing her first-half hat-trick against Birmingham.Credit:Getty

Birmingham, who have yet to win this season, improved in the second half but by then the damage had been done.

Chelsea could have scored more too, with Kerr, Bethany England and Lauren James all going close.

The Blues are just one point below league leaders Arsenal, who they face in the FA Women’s Cup final in two weeks. Almost half of the Matildas’ starting XI who turned out against Brazil in two friendlies last month could take the field in that clash, with a host of Australians playing for the sides.

Matildas skipper Kerr extended her contract with Chelsea for a further two seasons last week, saying the decision was a “no-brainer”. She also scored the only goal in Thursday’s Champions League clash with Servette in Switzerland.

Watch Messi, Neymar, Ronaldo and football’s biggest superstars in the UEFA Champions League with every match streaming ad-free, live and on-demand only on Stan Sport from this Wednesday 15 September.