MARTIN KEOWN AND CHRIS SUTTON: We’re absolutely crushed for England losing the Euro 2020 final, but don’t stop believing – there is a World Cup next year and the future is bright

Like you, Sportsmail’s Chris Sutton and Martin Keown experienced every emotion as England led and Italy equalised amid 120 minutes of drama before a gutting penalty shootout.

Here, our columnists provide their expert views on the critical tactical decisions, the crucial moments and the heartache of how it all ended…

SUTTON: For all their experience, 36-year-old Giorgio Chiellini and 34-year-old Leonardo Bonucci didn’t know what to do with Harry Kane. England’s striker was causing them so many problems. These ageing Italian centre backs don’t want to see an opposition striker dropping deep into pockets of space. 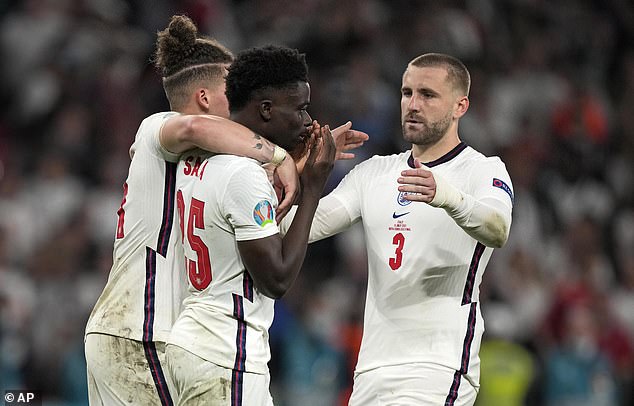 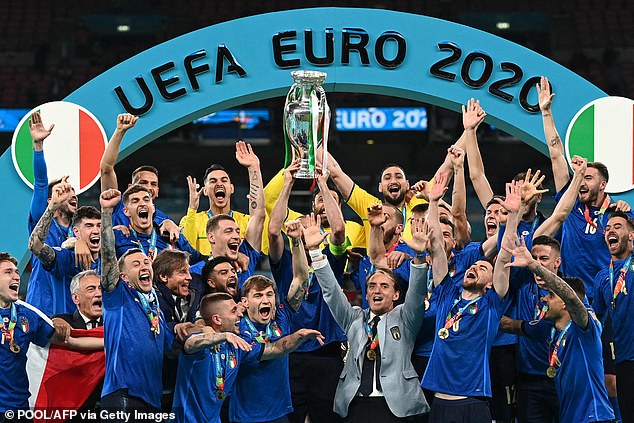 Italy, who lifted the European Championship trophy at Wembley, edged the game on the night

That was how England opened the scoring, with Kane acting as the link between Luke Shaw on the left-hand side of the pitch and Kieran Trippier on the right-hand side. It was a magnificent move, and one which Gareth Southgate must have been so proud to see unfold. How he stayed so cool and composed instead of celebrating wildly, I don’t know! I was at Wembley Stadium last night. That goal and the noise of the crowd gave me goosebumps.

KEOWN: England’s goal originated from some opening-minute sloppiness. Harry Maguire tried to play a pass back to Jordan Pickford but instead gave away a cheap corner. Chalk it up to nerves, perhaps.

On the plus side, it got the Italians out of their set-up. We expected them to be difficult to carve open. Heading into this final, Italy had not been in a losing position at Euro 2020 and they were unbeaten in their last 33 matches under Roberto Mancini. But 27 seconds after taking their corner England were 1-0 up.

Shaw started the move. He played a pass into Kane, who had dropped into one of his deep positions and then progressed play forward before finding Trippier. Kyle Walker made a decoy run down the right. That bought Trippier time. With an outstanding cross, he found Shaw, who made his finish look more straightforward than it was. 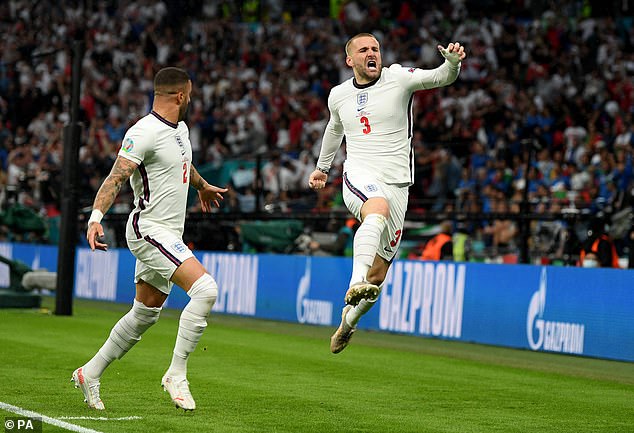 SUTTON: The rumoured line-up emerged around 3pm yesterday. Trippier in, Bukayo Saka out, meaning a return to a back three with wing backs for England. Surprising? Sure. Did it make me ever-so-slightly nervous? You bet.

But we had to back Southgate, especially given all of the excellent decisions he’d made en route to this final.

The opener vindicated Southgate’s decision. England still had a lot to do — but what a start. Southgate isn’t the first manager to show great trust in Trippier. Atletico Madrid boss Diego backed him last season, too. Trippier returned from a 10-week ban (for betting breaches) and walked straight into a top-of-the-table clash against Real Madrid.

With his help, Simeone’s side drew 1-1 and he played a crucial role in them being crowned champions of La Liga. Southgate attended enough Atletico games to recognise Trippier’s importance and, like Simeone, he trusted him to handle the big occasion. 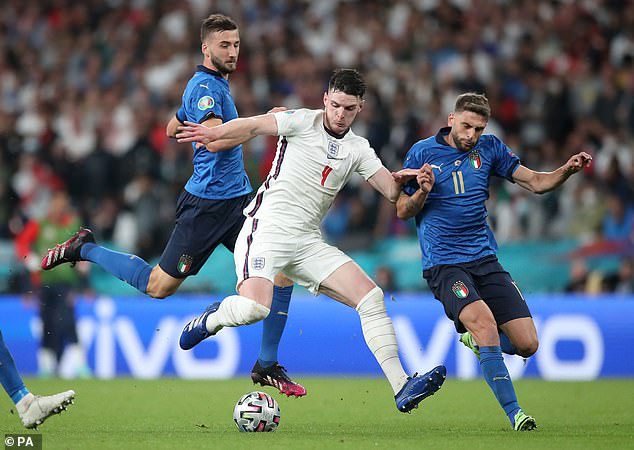 Declan Rice (centre) had the game of his career in the first half, making some critical tackles

KEOWN: Special mention must go to Declan Rice for the job he was doing in midfield. He was having the game of his career in the first half, breaking things up and bounding forward with the ball. He made some critical tackles but was making great strides into the opposition half, too.

Rice and Kalvin Phillips had a massive workload to get through, up against an excellent midfield three of Nicolo Barella, Jorginho and Marco Verratti. They were getting some assistance from England’s front men but I was impressed by Rice’s efforts in such a big game.

SUTTON: England did an ‘Italian Job’ on the Italians in that first half. They frustrated their opponents so much. In the 28th minute, Lorenzo Insigne dragged a shot from 25 yards well wide. His team-mates shouted at him. He shouted back, as if to say, ‘Well, what else am I supposed to do?’ He didn’t have any options.

Bonucci then had a go from 30 yards in first-half stoppage time. Mancini was furious about that. England limited the Italians beautifully. But in that second half it started to feel like England were clinging on. It was heart-in-mouth stuff at times. 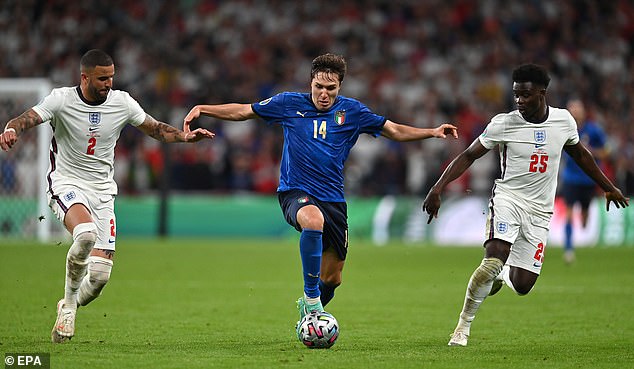 Federico Chiesa (centre) driving with the ball. England were clinging on in the second half

KEOWN: It became very tactical after Southgate’s side took the lead. It was as if we said, ‘Right, we’re in front, can you score against us?’ They could, but only from a corner. Italy finished the 90 minutes with almost 70 per cent possession and got back into the game via a set-piece.

Managerial decisions became key. Saka and Jordan Henderson were introduced by Southgate, followed by Jack Grealish early in extra time. Ahead of this game, we weren’t sure whether Mancini would start the direct Federico Chiesa down Italy’s right or Domenico Berardi, who likes to come inside. He started Chiesa but then introduced Berardi after 55 minutes. It became about who has the legs to go the distance.

SUTTON: The tension at Wembley was, well… you can imagine. As the second half of extra time started, it felt like England would take penalties then and there if given the choice.

The shootout didn’t go our way. ​I was crushed for Marcus Rashford, Jadon Sancho and Bukayo Saka missing their penalties. For all of England’s players, really. Football can be a cruel game. Italy edged it as the better team on the night but this was a horrible way for Southgate’s boys to lose. This is not a time to stop believing. There’s a World Cup next year. The future is bright.