IAN HERBERT: Keeping Everton in the Premier League just might be Goodison’s last great act, it’s a place of football spirituality and soul… while Salomon Rondon could fire Frank Lampard’s strugglers to safety

In the aftermath of an unspeakably bad afternoon, it was the silence which struck many of Merseyside’s blue half. There were no posts on some WhatsApp groups which usually hum with post-match chat.

The alien territory is what terrifies many supporters. It has been 23 years since Everton wound up in the relegation zone this late in the season, while Burnley – who have displaced them – have spent much of the last two years familiarising themselves with the place.

At times like this, all a club can really do is reach for what defines them and sets them apart. 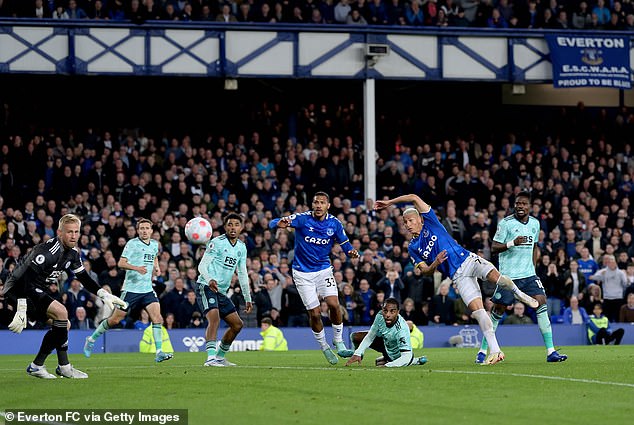 For Everton that means top-flight longevity: just four seasons outside the elite in 134 years.

And it means Goodison Park, a ground which steeps the club in old days and old glories. From the clack of the old wooden seats to the distinctive criss-cross steel architecture on the Bullens Road Stand balconies and the way the place can go from sullen to deafeningly defiant on one bad refereeing decision, this is a place of football spirituality and soul.

If there is something for Evertonians to cling to, it is that they have played relatively well there, too, even in the eye of the storm which plunged them into the bottom three on Sunday. 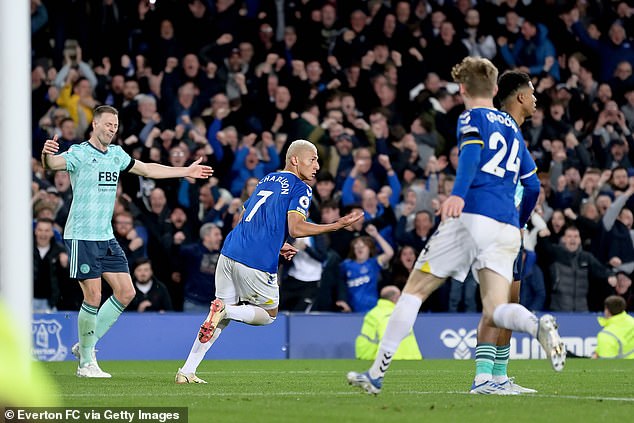 They despatched Leeds 3-0 two months ago. They were unlucky to lose late to Manchester City a few weeks later. The 1-0 loss to Wolves was poor but they dug in hard to win late against Newcastle, were resilient against Manchester United and showed more spirit to score a late equaliser against Leicester, when the crowd played a huge part.

The Newcastle win was a reminder of how Goodison collectively dragged the team out of jeopardy on a legendary May afternoon in 1994, when fans hung from trees surrounding the stadium to get a view of a monumental last-day victory over Wimbledon.

Everton fell 2-0 behind that day and when keeper Neville Southall saw that his team-mates were reluctant to take a penalty, he picked up the ball himself. Graham Stuart seized it from him and converted the spot-kick as Everton came back to win 3-2. 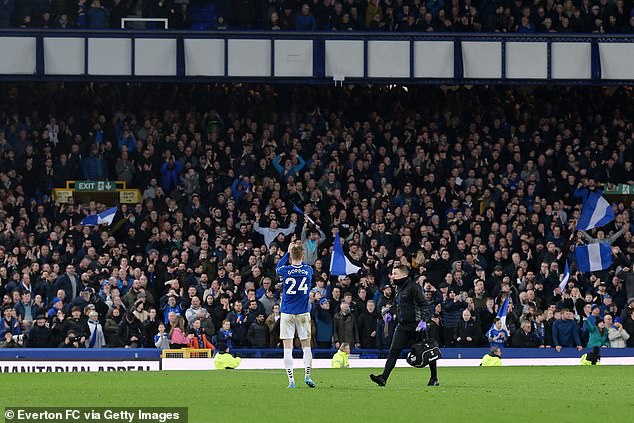 Southall suggested on Monday that the key to survival lay beyond tactics now. ‘We will survive by doing what we need to do,’ he said. ‘Don’t rely on anyone else. Rely on yourselves. Have a siege mentality.

‘Know that’s there’s nobody initially who wants us to stay up. Know that we need to do this ourselves. Then we can shove it back in their faces at the end of the season.’ But cussedness will probably not be enough, given that Everton have scored only six goals in 10 Premier League games. Survival seems to require someone stepping up and starting to find the net.

Dominic Calvert–Lewin’s continued absence from the last two squads, because of a quad twinge, calls into question whether he trusts his own body, having returned to the squad earlier this month. 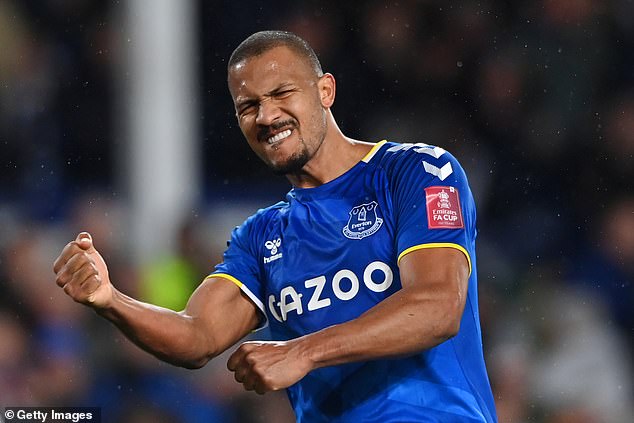 The timing of a recent interview he gave for a GQ magazine fashion piece did not help — the line that he is ‘not fit to wear the skirt’ was first-rate gallows humour from Evertonians.

But it seems increasingly that he was brought back from a broken toe too early. He might have played his last game this season. If that is the case then Salomon Rondon, who invited scepticism as he struggled after two years in China’s Super League, could be significant.

The Venezuelan was not popular when he arrived, because of the level of his football and the fact that he was Rafa Benitez’s man. 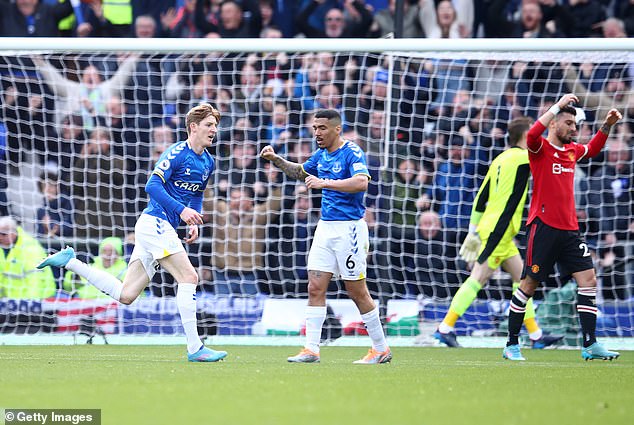 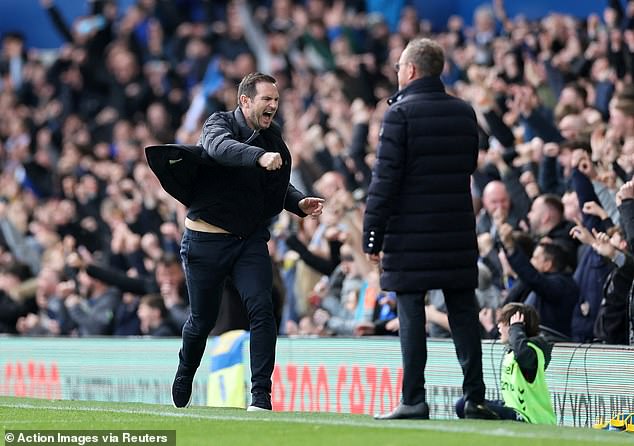 But Everton have few other choices given that Richarlison is patently not a No 9, despite clearly being up for the fight. Rondon had a 13-minute cameo in the 2-0 defeat by Liverpool on Sunday, but had not featured in the league before that since the miserable defeat at Norwich on January 15.

It is still surprising, though, that manager Frank Lampard has not at least tried a player who has scored in the Premier League for both West Brom and Newcastle between 2015 and 2019. History also suggests he should consider him. At the back end of 1998-99, when Walter Smith’s relegation-haunted team were considerably worse than Mike Walker’s in 1994, Kevin Campbell scored nine goals in five games, including a hat-trick in a 6-0 win over West Ham at a bouncing Goodison.

It helps the stadium’s buoyancy that fan sentiment for Lampard remains largely supportive, despite him winning only three league games and struggling to find a settled formation. 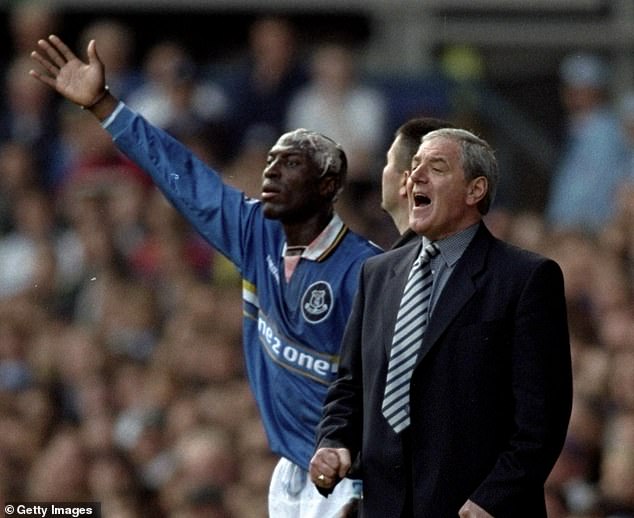 Beyond Merseyside, many are taking a distinct pleasure in Lampard’s discomfort. But there is an acceptance among Everton supporters that he cannot carry the can for a narrative of owner Farhad Moshiri wildly burning through £500million, seven managers and three directors of football in six years. It also helps that Lampard is one of the most communicative managers the club have known in years.

Those long-suffering fans would be devastated to see their club relegated for the first time in 71 years, just as the new Bramley Moore dock-side stadium they have waited 20 years for finally gets under way.

For now, though, the 130-year-old ground Archibald Leitch designed has a job to do, starting with the visit of Chelsea on Sunday, with Brentford and Crystal Palace also arriving in the space of four days next month.

Keeping Everton in the Premier League just might be Goodison’s last great act.