The Reds boss said the Uruguay international, who joined this summer in what could be a club-record £85million move from Benfica, would not be a ‘normal human being’ if he did not feel some pressure associated with the fee.

There had been some criticism on social media after the 23-year-old did not score in two 30-minute appearances in Liverpool’s first two pre-season friendlies in Thailand and Singapore but Nunez rectified that with four goals as a second-half substitute in the 5-0 victory over RB Leipzig. 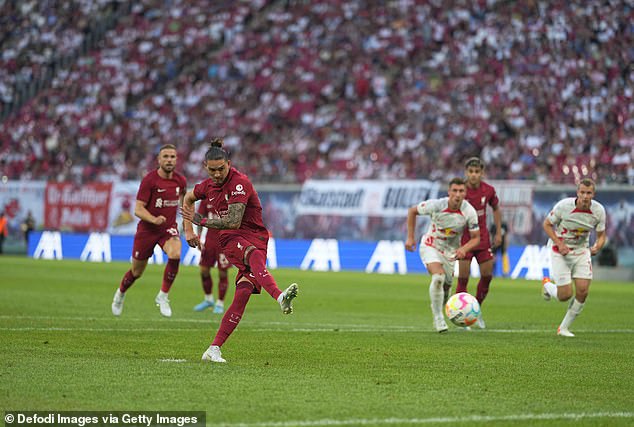 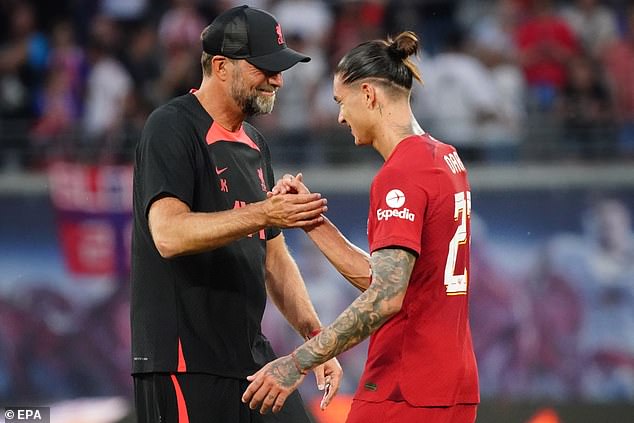 ‘We always think that if you pay a lot of money then the players feel no pressure or whatever,’ said Klopp.

‘They are all completely normal human beings and (when) the first touch is not perfect then all of a sudden… this generation of players read social media, which is really not smart, but they do. All of a sudden you get in a rush and these kinds of things.

‘That’s (scoring) the best way obviously to stop all these discussions. He’s a different striker to what we have or what we had, but he’s a really good one.’

Replacing Roberto Firmino for the second half, Nunez quickly asserted himself against the Bundesliga club, scoring from the spot within minutes of entering the game.

The Uruguayan international built on the confidence earned from opening his Liverpool account by adding a second just minutes later, latching onto a Trent Alexander-Arnold pass before striking the ball past Leipzig goalkeeper Janis Blaswich.

Nunez then completed his hat-trick after 68 minutes, before linking up with fellow Liverpool new boy Fabio Carvalho in the final moments of the game to add a fourth goal to his tally. 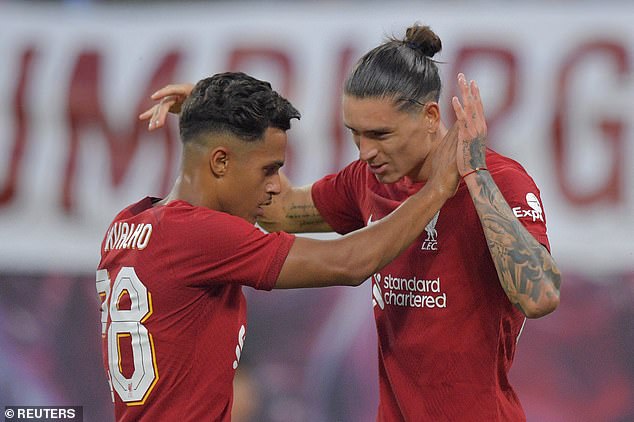 Prior to his explosive performance against Leipzig, Nunez had been mocked online by users, who compared the former Benfica striker to ex-Reds striker Andy Carroll, who moved to Anfield in the 2011 January transfer window for a then-club record fee of £35 million.

Carroll struggled to live up to the expectations of his massive fee during his time on Merseyside, bagging just six league goals across three seasons with the Reds.

The striker’s Anfield nightmare would end in 2012 after he signed for West Ham on a loan deal that was later made permanent at a cut-price £15million fee.

Liverpool’s 19-year-old midfielder Tyler Morton, who enjoyed a breakthrough with Premier League and Champions League debuts last season, is understood to be close to joining Championship side Blackburn on loan.