‘Watch WRESTLING if you like those kind of things’: Jurgen Klopp fumes at Burnley’s aggressive tackling despite beating the Clarets at Anfield… and Liverpool boss calls on Premier League to do more to ‘protect the players’

A livid Jurgen Klopp slammed Burnley’s tackling after his Liverpool team beat Sean Dyche’s side at Anfield, comparing the Clarets’ aggressiveness to wrestling.

The Reds won 2-0 in their first home match in front of a full Anfield crowd for nearly 18 months thanks to goals in either half from Diogo Jota and Sadio Mane, but their German manager was left reeling by some of the challenges made by Dyche’s men.

Klopp pointed to challenges made by Ashley Barnes and Chris Wood on his two centre-backs Virgil van Dijk and Joel Matip, while the Burnley strikers were regularly seen sending Liverpool defenders flying by not competing for headers on the ground. 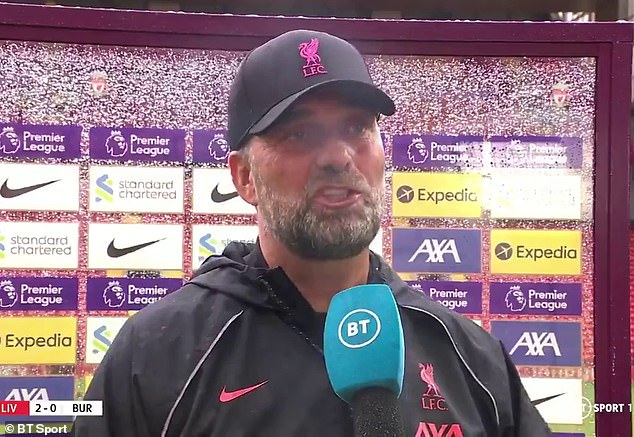 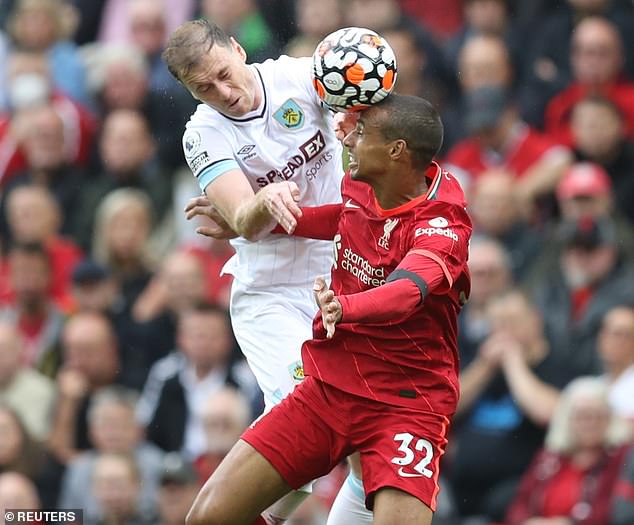 Klopp branded those type of challenges in Saturday’s Premier League clash as ‘too dangerous’ and indefensible.

The furious Liverpool manager told BT Sport in his post-match interview: ‘You always have to be ready for a proper fight but today we really were in a difficult game. You saw these challenges with Barnes and Wood on Virgil and Joel.

‘I’m not 100 per cent sure if we are going in the right direction with these type of decisions. It feels like we’re going back 10, 15 years back to when we said: “Oh this is the football we want to see.” It’s just too dangerous. 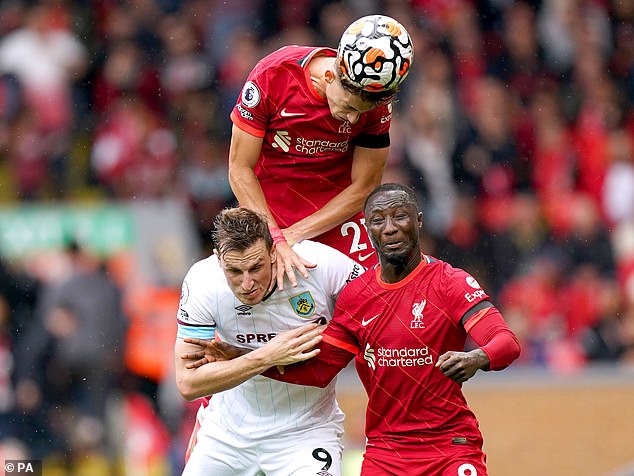 ‘[Nick] Pope is the first one then [Ben] Mee, [James] Tarkowski and the next one and that’s how it makes the game really tricky. That’s not the only balls they play but they are the most difficult to defend.’

Premier League referees are now being advised to be more relaxed in their decision-making after the standard of officiating came under serious criticism last season, with the Video Assistant Referee (VAR) accused of being over-fastidious in its intervention.

The officials have also been warned to let the game flow more and use the whistle less, but Klopp – who was frequently seen up in arms on the touchline at Anfield on Saturday – thinks the players now lack protection from dangerous tackles on the pitch.

‘I think it all started when we changed the rules 20 years ago to protect the players on the pitch,’ he said. ‘The players cannot touch each other in the area and have no influence in the air. 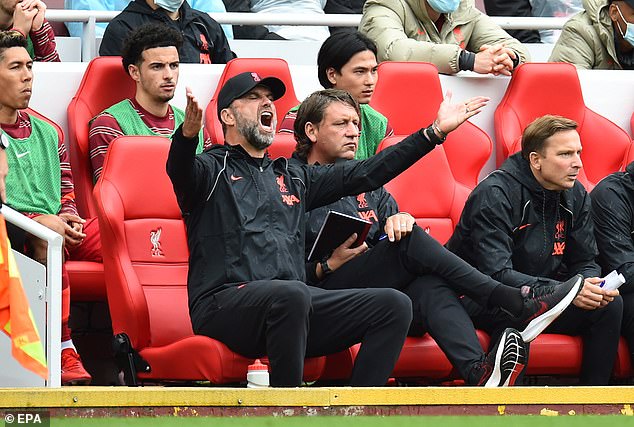 ‘I don’t think it’s right but I cannot decide these things. I heard that we want to let the game flow but we always have these situations like the second goal from Brentford (against Arsenal on August 13). It must be a foul. You cannot have your arms on the goalie and say that’s football. So these kind of things.

‘I like all decisions in favour for the offensive team. That’s fine. Like offsides now, benefit of the doubt to the striker and these sort of things. But we have to stick to protecting the players. 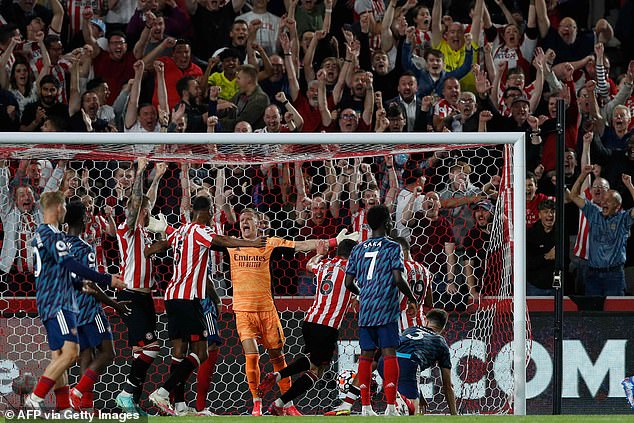 Klopp said this happens in other games too, such as Brentford’s clash with Arsenal last Friday

‘We can’t deny that and say: that’s a challenge, I love watching that. Watch wrestling if you like those things.’

Klopp ended his interview by saying: ‘Nobody got injured, that’s good.’

It is not the first time Klopp has publicly complained about Burnley’s style of play. In the exact same fixture last season, the German clashed with Clarets manager Dyche when Barnes became involved in a scrap with Fabinho just before half-time.

However, BT Sport pundits Peter Crouch and Joe Cole defended Burnley’s style of play at Anfield on Saturday, with the pair of former Liverpool players saying Dyche’s side did nothing untoward. 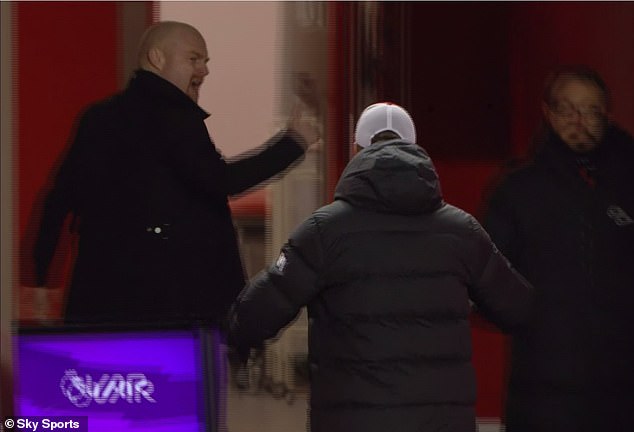 Klopp has taken issue with Sean Dyche and his Burnley side before, including in last year’s tie

‘I disagree with Jurgen Klopp. I didn’t see anything,’ said Crouch. ‘If Burnley come here and play Liverpool at their own team they get beat four or five.

‘Ashley Barnes and Wood have to play on the edge and try and unsettle Van Dijk and make mistakes or they won’t make mistakes.

‘When you’re at a lesser club with less technical players you have to do different things to unsettle players. It’s why we love the Premier League.’ 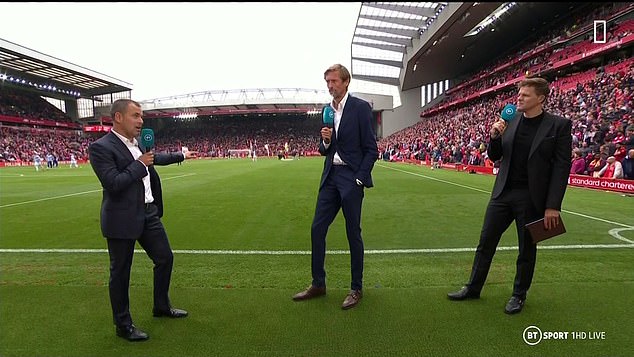 Cole, meanwhile, claims Klopp’s outburst on Saturday was a tactic to gain more favourable decisions in future matches as the Premier League season gets into full flow.

Speaking about the German, Cole said: ‘He’s very intelligent, it’s a smart move. It’s unusual for him to come out like this. It’s an easy interview today but he’s put a seed next week looking for more protection of his players.

‘I didn’t see anything untoward, I’ve played in teams when you’re not better on the pitch but you have to ruffle some feathers. I don’t think they were aggressive or going over the line at any point.’