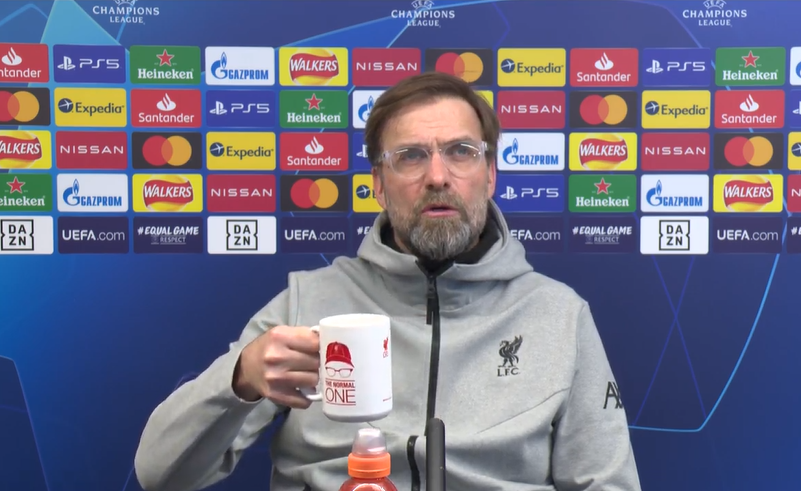 Jurgen Klopp has rubbished suggestions he was considering quitting the Liverpool job after the club’s defeat to Leicester City on Saturday and insists he is energised about the challenge of arresting their slump.

The German coach – who recently lost his mother – looked quite emotional after the Premier League champions suffered a 3-1 defeat at the King Power Stadium and conceded that his side were no longer in this season’s title race.

Speculation swirled on social media in the evening after the game that Klopp might leave Liverpool or even take a break, but he has dismissed the rumours and says he is committed to turning the club’s season around.

Asked about the support he has received from Liverpool fans, and whether he was aware of rumours claiming he might leave the club, Klopp responded: ‘So I heard about both.

‘So the banner is nice. Not necessary I don’t think, I don’t feel that I need special support in this moment or whatever. It’s nice, very nice.

‘And what was the other thing? That I could leave? Would leave?’

Klopp continued: ‘Ah – so did I get the sack or did I leave by myself or what? What is the word? What were the rumours about?’

The press officer interjected again: ‘The rumours were you were leaving or taking a break.’

Klopp continued: ‘Oh, neither nor. Neither nor. I don’t need a break. So I heard as well actually about… look the last thing I want to do is talk about private things in a press conference.

‘But everybody knows, privately we had an absolutely tougher time, but that is not only for now three weeks ago or whatever, that was a much longer time already.

‘And we always deal with it as a family, 100%. And when we came here to the football club to work, I am 53, I’ve worked in football 30 years, 20 years as a coach, I can split things. I can switch off one thing and then the other thing.

‘I don’t carry things around. If I’m private I’m private, if I’m football and the workplace then I’m here. Of course we are influenced by the things that are around, but nobody has to worry about me or whatever.

‘I’m honestly, I might not look like this, because the weather is not cool, and I’m white [in the face], and my beard gets more and more grey all these kind of things, yes I don’t sleep a lot, that’s true, and my eyes look like they are [tired], that’s all fine, but I’m full of energy.