‘If you don’t get through in a game like this, those moments are gone for ever’: Jonny Evans urges Leicester not to blow chance of reaching Europa Conference League final – as defender warns ‘time is ticking by in your career’ in rallying cry against complacency

Leicester City have grown accustomed to making history in recent times and as they stand on the brink of a first European final, Jonny Evans urged them not to let a golden opportunity slip through their fingers.

Victory over Roma – managed by Jose Mourinho – at the Stadio Olimpico on Thursday night will give Leicester the chance to break new ground for the third time in six years.

After a 1-1 draw in the first leg, a win will seal a place in the final in Tirana, Albania, on May 25. In 2015-16, Leicester stunned everyone by winning the Premier League and again upset the odds with FA Cup glory last year. The Europa Conference League means they can now be pioneers in Europe. 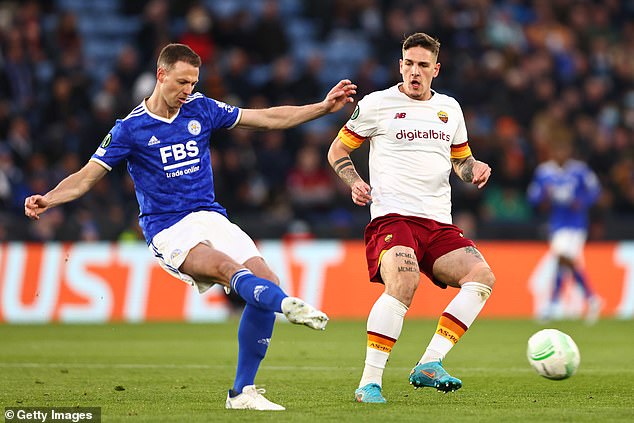 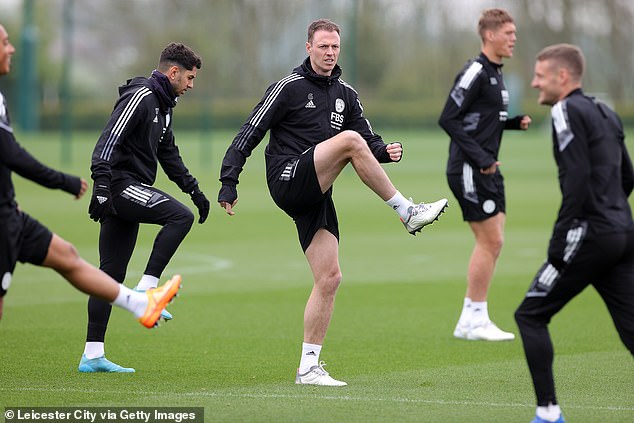 Yet Evans, 34, knows how quickly life can change. In his seven years as a first-team player at Manchester United, the centre back collected 10 trophies. But after winning the Premier League and Community Shield in 2013, it was eight years before he felt that joy again – when Leicester beat Chelsea in the FA Cup final last May.

‘If you don’t get through in a game like this, those moments are gone for ever,’ said Evans, whose last appearance in a European semi-final was for United against Schalke in the Champions League in 2011.

‘I can remember being knocked out of a few cup competitions and it hurt at the time, but when you look back a couple of years later it hurt a bit more,’ said Evans. ‘Time is ticking by in your career and you look back at opportunities to get to finals and win silverware.

‘The FA Cup last year was such a big thing for us psychologically. Sometimes when you’re in the quarter-final or semi-final you think you’re still so far away from winning a trophy but really you’re not, you’re so close.

‘They are moments that you need to try to take if you can. That’s one thing I’ve learned.’

The Europa Conference League was widely derided when it was introduced by UEFA for this season, and Leicester manager Brendan Rodgers even admitted last December that he did not know what the competition was.

Rodgers was speaking after a 3-2 defeat by Napoli sent Leicester out of the Europa League and into the third-tier competition.

The semi-final line-up shows that this is more than a simple consolation prize. Feyenoord and Marseille, in the other tie, are giants of Holland and France respectively, while Thursday night’s expected crowd of 72,000 in Rome shows how seriously the locals are taking it.

‘Because nobody has ever won the competition and it’s the first year, it’s very hard to gauge how it’s going to be received,’ said Evans, who will line up alongside Wesley Fofana at the heart of the Leicester defence.

‘When we sat down in the canteen one day after training to watch the draw and saw the list of teams, we were all thinking there were some unbelievable names in there.

‘I remember thinking I would love one of the Dutch teams and then we got PSV Eindhoven in the quarter-finals. Then you’ve got teams like Roma in there. It was amazing looking at the list.

‘The manager used that moment to get us all together. It made us realise that it would be fantastic if we went all the way.’

Rodgers expects to select his strongest XI here after Kiernan Dewsbury-Hall and James Maddison were declared fit to travel to the Italian capital.

The pair missed Sunday’s loss to Tottenham as a precaution after injury concerns, but both should start on Thursday night.

Rodgers said: ‘We are going to a stadium which will be full and most of the supporters will be against us, but that’s OK. We’ve won games in those circumstances before. This is our biggest game of the season. We arrive fit, fully focused and ready to take on the challenge. Injury-wise, I would say it’s a much healthier position than what we’ve been in for most of the season.

‘Now we want to take this next step forward. Can we reach our first European final? We have a 50-50 chance of doing that and if we play like we did in the first leg then we’ve got a great chance.’