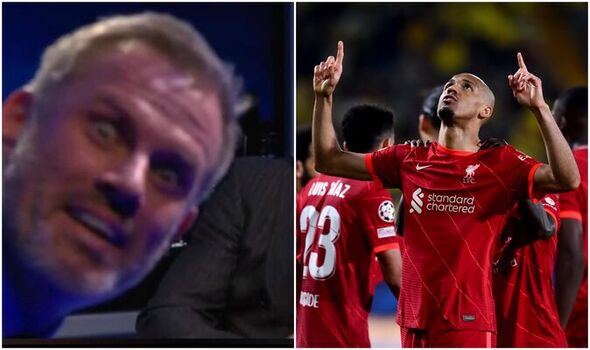 Jamie Carragher had the last laugh in an amusing social media back-and-forth with colleague Gary Neville after Liverpool reached the Champions League final. Manchester United icon Neville sarcastically dug out Carragher while Villarreal took control of the semi-final second leg clash, only for Liverpool to complete a spirited comeback.

The tie was all set for Liverpool to seal a comfortable route into this month’s showdown given that Jurgen Klopp’s side had won the first leg 2-0 at Anfield. But a vibrant Villarreal comeback shook the Premier League outfit.

The Spanish side levelled the tie at 2-2 with two first-half goals. Neville, who has had to endure a woeful United campaign this term, took delight in Liverpool’s struggle.

Former right-back Neville tweeted a video of him sipping at wine while pulling an expression that hinted he was delighted by Villarreal’s performance. The 46-year-old was not done there as he also fired a dig at Reds legend Carragher.

JUST IN: Guardiola responds to call for Man City to give Madrid guard of honour

Neville mocked the ex-defender, sarcastically quote-tweeting Carragher’s post with: “Good call gaffer.” The tweet was accompanied by a thumbs-up emoji.

But Neville was soon made to look silly. Klopp appeared to agree with Carragher and brought on January signing Luis Diaz.

The Colombian had a major impact on the game, scoring one of the goals in a spirited second-half fightback. Fabinho scored the first as Liverpool went 3-2 ahead on aggregate before Diaz strengthened the Merseysiders’ lead.

Sadio Mane struck a third on the night to complete a 5-2 victory. Carragher waited until after the game to hit back at Neville.

He tweeted an infamous picture of him and Neville in the Sky Sports studio. The camera shows Carragher in the foreground, mocking Neville who sits despondent in the background.

Neville tweeted a self-deprecating picture soon after. The former England man posted an image of him looking weary with his wine glass against his face.

Meanwhile, Carragher continued to mock Neville. The 44-year-old tweeted an old picture of Neville looking at his phone with the caption: “@GNev2 checking his timeline.”

After the victory, Liverpool defender Virgil van Dijk said: “First half, obviously we should forget as soon as possible! Aggression, on the ball we weren’t good enough, obviously the early goal doesn’t help us but helps them massively.

“We had to dig deep and be very mature. Second half we played outstanding I think, with and without the ball, winning it back quick. It was difficult for them to keep up with the press and our runs, and it was a well deserved win based on the second half.”

Liverpool will play either Manchester City or Real Madrid in the final, which is due to take place in Paris. Premier League City lead Los Blancos 4-3 on aggregate.