Jamie Carragher had his latest run-in with a football fan while working for Sky Sports at Nottingham Forest’s clash against Tottenham Hotspur on Sunday. The Liverpool legend was involved in a tense exchange in which he snatched a Forest supporter’s phone out of his hand at the City Ground.

Footage has emerged showing stewards escorting Carragher down the side of a stand housing a section of the home faithful during the 2-0 defeat to Antonio Conte’s side. The 44-year-old was being heavily goaded as he walked down from the commentary box in the 15-second clip, with one fan calling him a ‘Scouse b*****d.’

Immediately after, Carragher turned his attention to a fan recording him from close proximity – although it’s unclear whether this was the individual to throw the abuse his way. He grabbed the fan’s phone with a serious look on his face, refusing to give it back before a steward stepped in to cool the incident down.

Another clip appears to be from just moments later after Carragher made his way to the pitch. The former England international was once again being labelled a ‘Scouse b*****d’ by a group of supporters as he walked along the sideline before turning around a shrugging – although both parties laughed it off after his reaction. 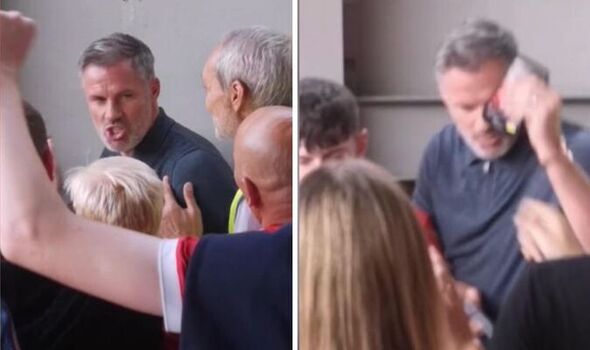 On Thursday, Carragher poured cold water on the severity of the incident. When approached for comment from the Mirror, he explained: “I was being escorted from one part of The City Ground to another, past some vocal fans with plenty of heckling. For me, no harm was intended from either side.”

But an eyewitness said: “He was getting a lot of stick when he was coming down the stairs and then he stopped and grabbed some lad’s phone. He seemed pretty riled up by it all – at one point, I thought he was going to properly kick off.” 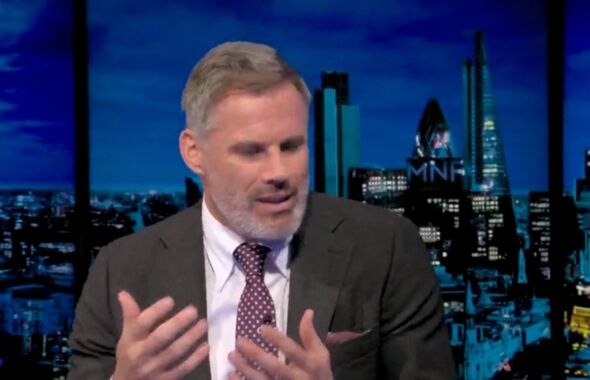 Carragher has a history of controversial fan interactions. Sky Sports suspended the Anfield icon after he was filmed spitting at a teenage girl from his car to another in response to being provoked by a Manchester United fan at a set of traffic lights following a match. He was off Sky duties for five months after apologising on live TV.

However, since returning, Carragher is now widely considered one of the best pundits in football and regularly draws praise for his analysis on Monday Night Football and the broadcaster’s other shows.