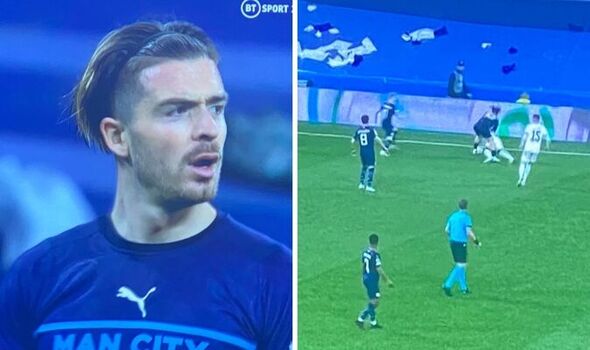 Jack Grealish could not hide his frustration as Manchester City’s Champions League final hopes faded in the closing stages of a scintillating, energy-sapping 120 minutes of enthralling action. The £100million man stamped his quality all over this heavyweight clash after being introduced from the bench by Pep Guardiola in the latter stages of the second-half.

Grealish, who was oozing with confidence on the biggest stage of all, danced his way through the Real Madrid defence before his goal-bound effort was cleared off the line.

The former Aston Villa captain also forced Thibaut Courtois into a fine save as City strived to put the game beyond reach.

However, their lack of cutting edge in front of goal across both ties saw them pay the ultimate price.

Real Madrid substitute Rodrygo scored twice in a matter of minutes to flip the game on its head – sending the pulsating clash to extra-time.

Los Blancos then took the lead when Karim Benzema steered home a penalty that he won after being fouled by Ruben Dias.

Grealish was working his socks off to try and get City back into the tie as he chased back and done the defensive work, in a bid to regain possession for his side

But by this point – the closing stages of the contest – Real Madrid were too clever and too smart, going to ground at every opportunity.

Eduardo Camavinga hit the deck after a challenge from Grealish with 117 minutes on the clock, earning his team a priceless foul.

The England international was furious and felt the referee Daniele Orsato had been conned by the Frenchman.

Pitch-side microphones picked up Grealish yelling “f*** off man” towards the official in fury.

The British transfer record cut an animated figure as he prepared to defend the free-kick, like many others, he was clearly incensed by the manner if City’s remarkable collapse.

Referee Orsato faced plenty of scrutiny from City’s players earlier in the match when Casemiro escaped without a caution after hacking down Kevin De Bruyne.

The Brazilian’s scissor challenge somehow went unpunished in the first half, breaking up a City counter-attack.

It was not the only foul that Casemiro would make but still, he managed to play on without caution.