Home » Soccer » Italy and Spain's squads compared: Who comes out on top ahead of semi?

Italy’s titanic centre backs will stand them in good stead but Spain have marathon man Pedri running the show in midfield… as two of Euro 2020’s heavyweights go head-to-head at Wembley – who would England (or Denmark!) rather face in the final?

When Italy and Spain step out onto the hallowed turf of Wembley on Tuesday, all eyes will be on the Euro 2020 semi-final match for a whole host of reasons.

Of course, fans of the two countries have an especially vested interest in the clash, but there are also millions of England and Denmark supporters with one eye on a potential final opponent.

But who is the preferred final match-up? Taking a look at each position, Sportsmail rates Italy and Spain’s talented starting XIs… 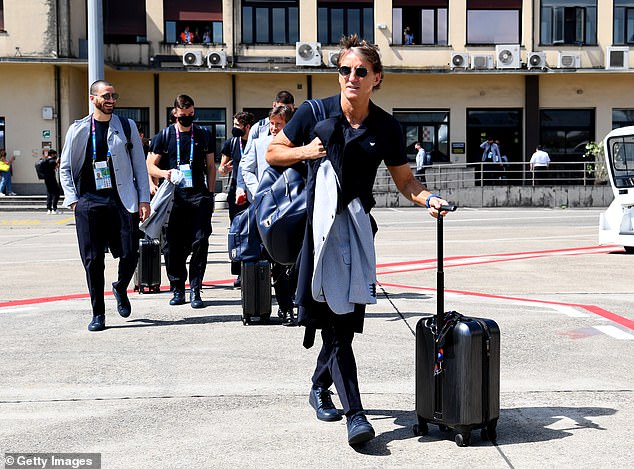 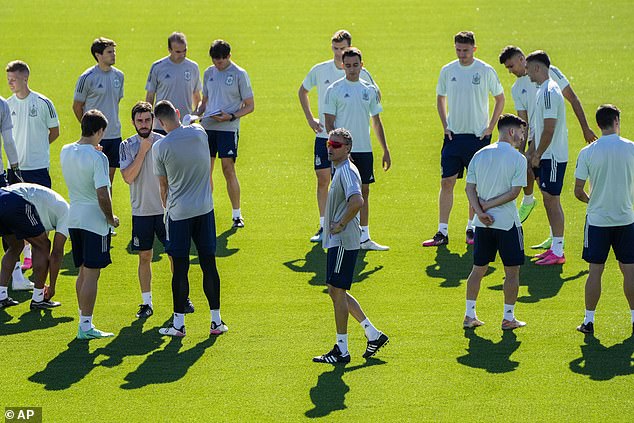 Gianluigi Donnarumma (Italy): Having broken through to the AC Milan first-team at just 16, he has been a household name for years – and this summer is perhaps the biggest of his life as he plays for Italy at the Euros, before moving to Paris Saint-Germain.

He has had an impressive tournament and is yet to concede more than one goal in a game while playing for Italy across his five years with the national team. He made a couple of excellent saves against Belgium and mistakes are rare. 9/10

Unai Simon (Spain): As recently as a few months ago, it would not have been expected that he would be Spain’s No 1, with David de Gea and Kepa Arrizabalaga both also among the squad, but after an impressive season with Athletic Bilbao it is certainly deserved.

His most high-profile moment of the tournament was *that* catastrophic error against Croatia, but he has since redeemed himself by helping his country win their vital penalty shootout against Switzerland. 8/10 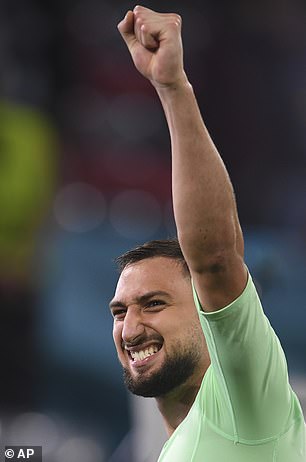 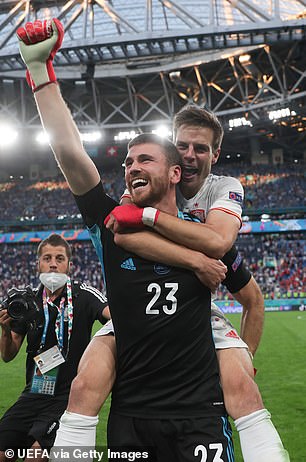 Giovanni Di Lorenzo (Italy): After only starting in one of the group matches, he has become a mainstay in the knockout stages and looks set to keep his place for the semi-final on Tuesday.

Against Belgium, he did struggle with the pace and power of Jeremy Doku, but going forward he offered plenty and should not be underestimated by Spain. 7/10

Cesar Azpilicueta (Spain): He didn’t start in either of the first two matches – both of which Spain drew – but has since been a part of every game and even scored his first ever international goal at the age of 31.

Marcos Llorente, who was in his place at the start of the tournament, hasn’t had a look-in since. Italy will be a tougher test for him, but he has the experience to deal with whatever is thrown at him. 8/10 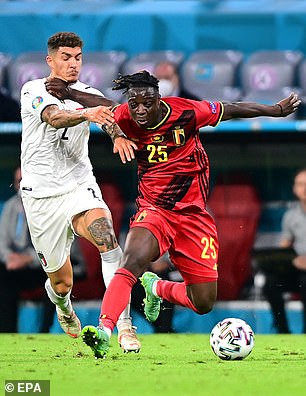 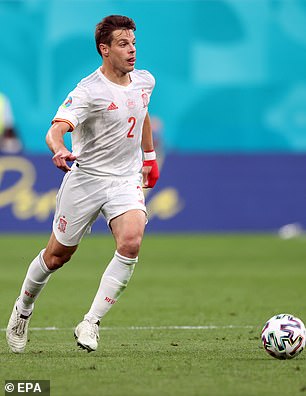 Leonardo Bonucci (Italy): A real titan of Italian football, alongside his club team-mate Giorgio Chiellini. While Chiellini has missed a couple of games, though, Bonucci has been a rock throughout the tournament.

So far, the Italians have conceded just two goals, and much of that is due to his experience and leadership at the heart of defence. A player to be feared. 9/10

Aymeric Laporte (Spain): Had to silence plenty of doubters after switching allegiances for France, but most Spain fans are now very glad he is wearing their colours. It’s also worked out for him, given his new country have gone further in the tournament than the squad he couldn’t get into.

On the pitch, he has played every minute of the tournament so far – one of just three outfield players to achieve that feat – but it hasn’t been all plain sailing. Him and Pau Torres had a muddle-up against Switzerland and you can tell the pair have rarely played together. Sergio Ramos will be watching on with interest. 7/10 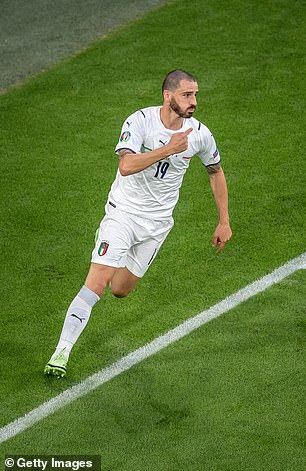 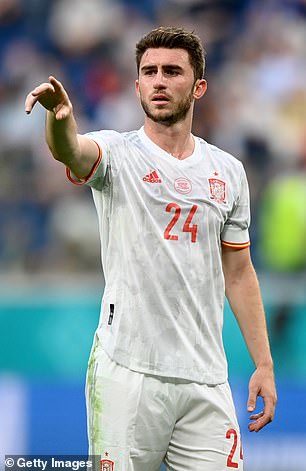 Giorgio Chiellini (Italy): Another giant of Italian football, fans won’t have a bad word to say about the 36-year-old. That said, his body isn’t quite what it used to be and he has missed a couple of matches through injury.

When he’s been on the pitch though, his performances have been near faultless and Italy’s tried and tested partnership at the heart of their defence could well be what takes them all the way in this tournament. 9/10

Pau Torres (Spain): There is no doubting he’s a good defender, and he had a brilliant season for Villarreal, but it’s been quite a difficult tournament for Torres – and the Spain defence as a whole.

The lack of experience between himself and Laporte has been telling at times. Against Switzerland, he didn’t look comfortable on the ball, gave it away too easily and showed his fragility throughout. 7/10 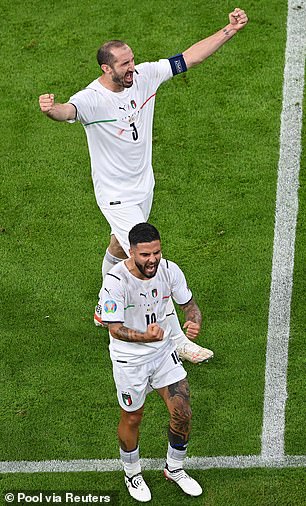 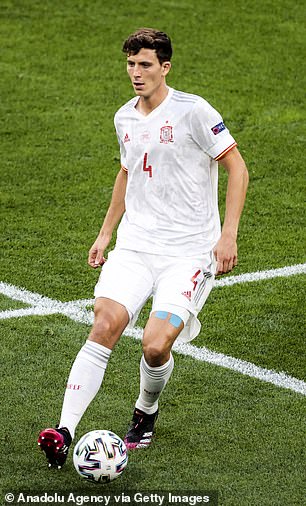 Emerson (Italy): Now this is perhaps the most interesting position on the pitch, given he has started just once in the tournament and wouldn’t be anywhere near the pitch were it not for Leonardo Spinazzola’s agonising injury in the quarter-finals.

Thankfully for Roberto Mancini, the Chelsea man did get some minutes against Wales and looked assured both in that match and when he came on with 10 minutes left against Belgium. Spain will definitely target him as a weak link, though. 7/10

Jordi Alba (Spain): If the centre backs aren’t experienced, the left-hand side perhaps makes up for that with Barcelona and Spain stalwart Alba. Although he does have his critics, there is no doubt that he is a big-game player.

He scored against Switzerland too – although it did eventually go down as an own goal – and has been consistent both defensively and going forward. 8/10 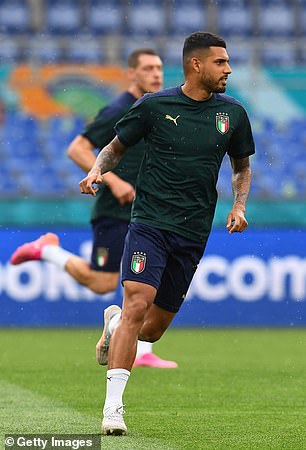 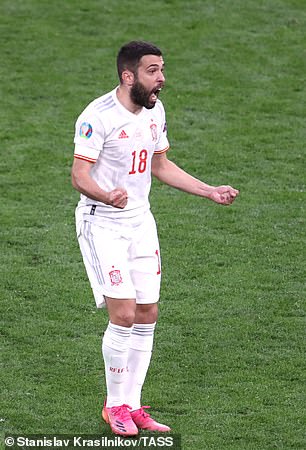 Emerson Palmieri (left) will be thrown in at the deep end, while Jordi Alba (right) is solid

Nicolo Barella (Italy): The Inter Milan regular has been heavily linked with a Premier League move this summer, and his stock will continue to rise if he can help Italy to the final of this summer’s Euros.

He has been a regular for Mancini throughout the tournament, only missing one game against Wales when the boss was resting some of his star men. He also goes into this match having scored the opener in the quarter-final, so will certainly not be lacking in confidence. 8/10

Koke (Spain): Luis Enrique’s midfield is impressive, and Koke is an integral part of it. He is the team’s set-piece man too, delivering regularly brilliant balls into the box, be it from corners or free-kicks.

He is a threat bombing into the box  and is a creative threat, too, but this is far and away the biggest test he will have faced in the tournament so far. 7/10 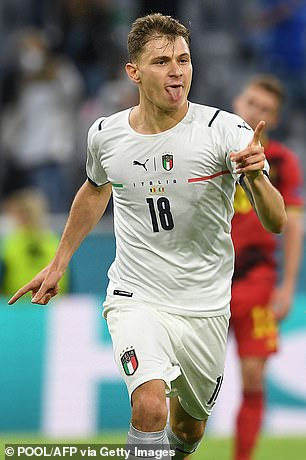 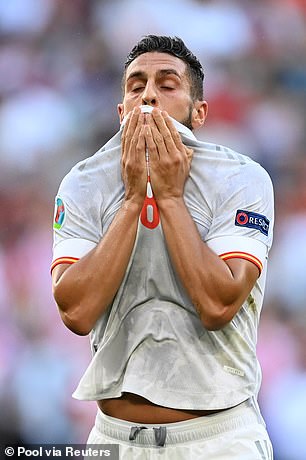 Nicolo Barella (left) is a top talent, while Koke (right) has been integral for Spain this summer

Jorginho (Italy): This, arguably, is where the match will be won and lost: in the heart of the midfield. Jorginho had an excellent season with Chelsea, winning the Champions League, and now he’ll be desperate to continue his success on the international stage.

He has a 95 per cent pass accuracy, and has played the most minutes of any Italian outfield player at the tournament, impressing throughout. He is the glue that holds the team together and will be vital on Tuesday night. 9/10

Sergio Busquets (Spain): A winner of the World Cup, a European Championship, multiple Champions Leagues and multiple LaLiga titles, there is no doubting Busquets’ stature in the game, and he is vital to what Spain do.

After catching Covid in the build-up to the tournament, he was a huge miss but has now slotted straight back in and is doing what he does best. At 32, he may be entering the twilight years of his career, but he certainly still has the ability to haul the Spaniards through another tournament. 8/10 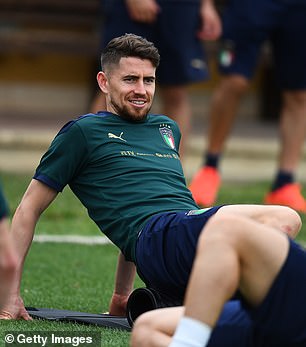 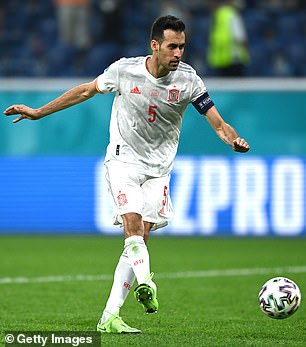 Marco Verratti (Italy): With the third-best pass success rate of any player at the tournament with three or more starts, Verratti is certainly impressing at the heart of a team that are widely regarded to be the best of the remaining sides.

Against Belgium, he had at least 15 touches more than any other player on the pitch – despite being taken off in the 73rd minute – demonstrating just how vital he is to the team. Arguably one of the players of the tournament so far. 9/10

Pedri (Spain): Absolutely Spain’s best player of the tournament so far, and a hugely exciting prospect given he is just 18 years of age. He has covered the most ground of any player – 61.5km – which is remarkable in a season that has seen him play over 60 matches already (and still with the Olympics to come).

If Spain are to score against the Italians, you would back Pedri to be at the heart of it, and they will need him on form to have any chance of success. 9/10 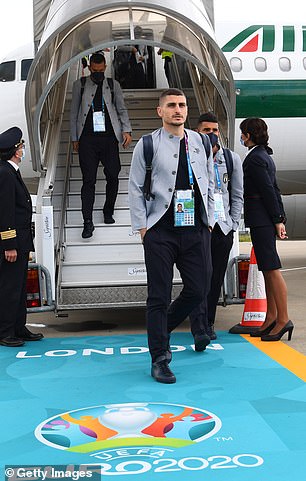 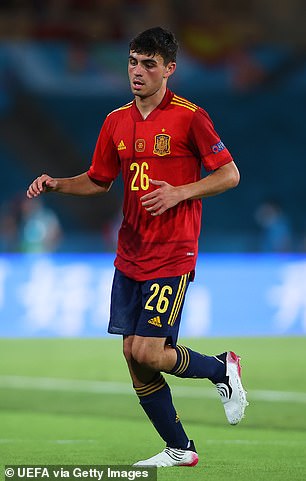 Marco Verratti (left) exits the plane in London. Pedri (right), meanwhile, has been one of the stand-out stars of the Euros despite his tender age and he is pivotal to Spanish success

Federico Chiesa (Italy): Another player that has had a storming Euros is Juventus star Chiesa, who particularly impressed against Austria, coming off the bench to score and help his team to victory.

He was then rewarded with a start against Belgium and again looked lively, playing with power and aggression throughout. A real danger-man. 8/10

Ferran Torres (Spain): Against Croatia in particular, the Manchester City star was brilliant, creating more chances than any other player on the pitch and taking his Spain tally to eight goals in 15 matches. He started against Switzerland as well, as has been tipped to retain his place for the semi-final. 8/10 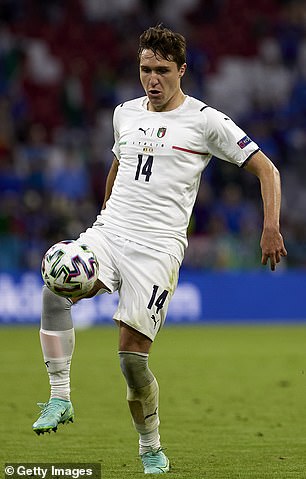 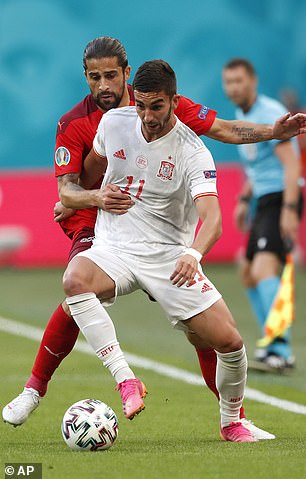 Ciro Immobile (Italy): After scoring in his first two matches of the tournament, it has really quietened down for Immobile and he hasn’t looked particularly impressive in the latter stages. He endured a really poor first touch last time out and struggled to make an impact.

He’s likely to keep his pace given his unquestionable talent and eye for a goal, but he has faded and looked lacking in confidence against Belgium in the last round. 7/10

Alvaro Morata (Spain): A player well-known to those of an English persuasion, Morata started the tournament in very difficult fashion, getting booed by his own fans on regular occasions.

He missed a penalty against Slovakia, which didn’t help proceedings, but on a couple of occasions has shown glimpses of his ability by chipping in with a goal. Spain fans will be reminiscing on the good old days with David Villa and Fernando Torres, but for now Morata will have to do. 6/10 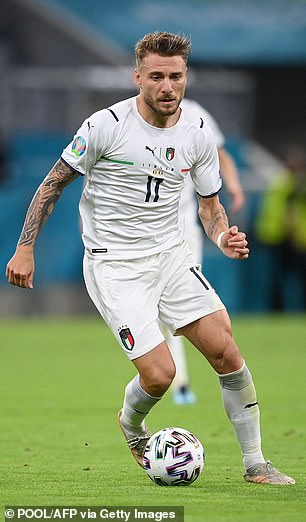 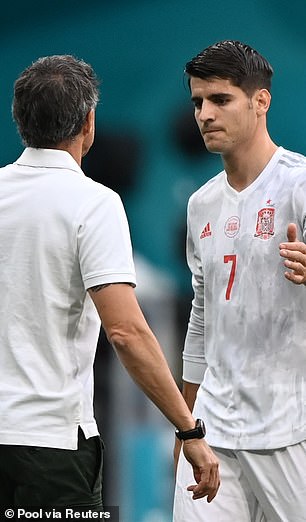 Lorenzo Insigne (Italy): An absolute virtuoso last time out against Belgium, he is having a great tournament and is set to be a handful once more against Spain on Tuesday. What he lacks in pace, he makes up for with effort and skill.

He scored just before half-time – his second of the tournament – and you wouldn’t back against him to get another before the final ball is kicked. 8/10

Gerard Moreno (Spain): This position is actually up for grabs, and was Pablo Sarabia’s to lose after an impressive few games. He has picked up a knock, though, and Enrique hinted that he wouldn’t be fit for the Italy game on Tuesday.

Therefore, Moreno is probably the most likely option to come back in, having started in the games against Poland and Slovakia earlier in the tournament. He is probably the best Spanish striker in LaLiga but it hasn’t quite worked out for him just yet this summer. That’s not to say it can’t in the latter stages, though… 7/10 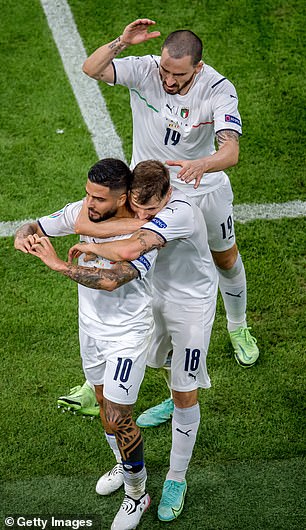 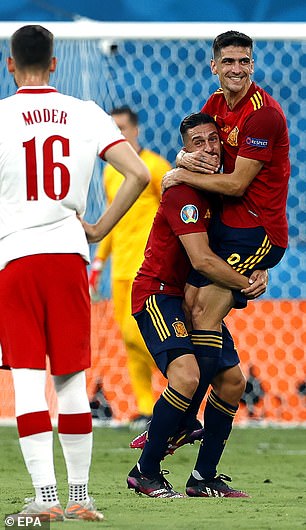 Lorenzo Insigne (L) edges out Gerard Moreno (R), who has not been first-choice throughout

And so, England would probably rather play Spain in the final than Italy, given the form of the players and how the tournament has played out so far.

Spain have fumbled their way through with two group-stage draws, while Italy have impressed throughout and are on an incredible unbeaten streak under Roberto Mancini.

It is their centre back partnership that could secure them the victory, while Jorginho’s form in the middle of park will also have a big impact.