Chris Harold was set to enter next season in the prime of his career. He is 28, fit and in favour at Central Coast Mariners, where he has another two years on his contract.

Instead, the forward has decided to end his professional career after becoming disenfranchised with the culture of the game in Australia, saying it is plagued by dishonesty, disrespect for players and a lack of direction from administrators. 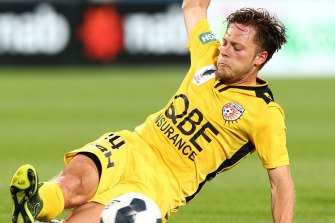 Disenfranchised: Chris Harold has retired at 28 to pursue a legal career, unhappy with the state of the game. Credit:Paul Kane

Harold had just returned to his native Perth when the COVID-19 lockdown came into effect and spent the ensuing months watching the players and A-League clubs squabble over pay. He said the bulk of his career had been spent bickering over pay or work conditions but the latest row proved the final straw.

"Unfortunately, the nature of these negotiations that have gone on over the last six months, I think it left a bitter taste in my mouth and it left me really disenfranchised with the game in Australia," Harold said. "The way parties went about these negotiations didn't motivate me to be a part of it any longer."

The decision was difficult for Harold but it was made easier by the fact he had options. While most players are forced into retirement, Harold had the luxury of choice. A contract until 2022 provided him with long-term security but opportunities were also emerging as a lawyer. He recently received a law degree, which took nine years to finish while balancing part-time studies with a career as a footballer.

When he began his studies as a teenager, Harold planned on making the transition to law when his playing career reached an end. Initially, he thought that would be well into his 30s. At 28, Harold still has plenty in his tank physically but ran out of patience with the game.

The difference for me is I had an alternative. For a lot of guys out there, football is everything.

"These feelings were starting to bubble away as soon as I came home. As time passed, it felt like we were going nowhere, going backwards and it helped me with the decision I wanted to make," Harold said. "I have spoken to a lot of my friends in the league and a lot of players have felt the same way I have felt about the whole process.

"The difference for me is I had an alternative. For a lot of guys out there, football is everything and they are very reliant on that being their only career."

Harold will begin working with a law firm in Perth, having already undertaken some legal work with the players' union, the PFA, in recent months. His aim is to work his way into environmental and planning law. He has a passion for the environment.

"I already have work lined up at a law firm in the city of Perth. For me, my transition has been an utterly seamless one," Harold said. "It's not as if I didn't have the option to continue playing in the game but having an education and external interests away from the game is something I have really pride myself on."