World Cup winner David Villa has been brought in by Indian Super League side Odisha FC as a global football advisor in a major coup for the club’s recently-appointed British-Indian president Raj Athwal.

One of the best strikers of his generation, Villa remains Spain’s all-time leading goalscorer and counts Barcelona, Atletico Madrid and New York City among his former clubs.

The Champions League winner – who co-founded the DV7 Group football consultancy five years ago – thinks his experience of working with some of the biggest names in world football can prove invaluable for Odisha FC.

“I will try and bring my experience [to the role],” Villa said in an exclusive interview with Sky Sports News.

“Obviously, I didn’t play in India but I played soccer for 20 years as a professional and before that in the academy. And in all of the projects that we [my team] are involved in, I try to give all of my experience that I have in soccer.

“I was very lucky to have played with great players, behind me and close to me [and I also played under some] big coaches, amazing coaches. I have played in the big tournaments of football, and I will try and help using all of that experience.”

Villa only hung up his boots at the end of last season following a spell at Vissel Kobe in Japan where he played alongside former Barcelona team-mate Andres Iniesta, scoring 13 goals in 28 J-League appearances.

The four-time La Liga title winner is two months younger than AC Milan striker Zlatan Ibrahimovic, and a year younger than Arsenal midfielder Robert Pires was when he participated in the inaugural season of the Indian Super League back in 2014, aged 40.

Villa revealed Odisha FC were keen to find out if he still wanted to play but insists he is very content in retirement – although he thinks he is still probably capable of playing again at a competitive level.

Asked if he was tempted to play in next season’s Indian Super League (ISL), Villa said: “It was the first question of the people of Odisha!

“I took a decision a year ago to stop playing because I thought that was it was the [right] moment, not because I felt that I cannot play soccer anymore. I believe if I train I can play soccer for sure. 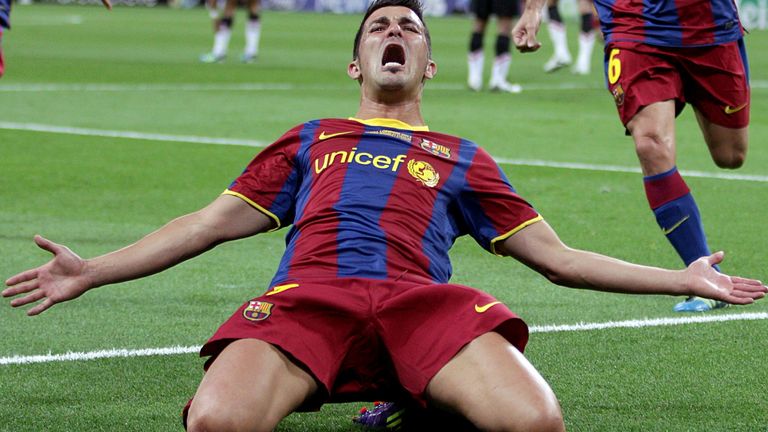 “But I thought that moment [when I decided to retire] was the right time. As you know, life is not just about soccer I am 39 and I played for 20 years as a soccer player.

‘This is a statement of intent for Odisha FC’

Sky Sports News broke the story that Athwal – one of the country’s most experienced British South Asian football executives – had joined Odisha as president, becoming the first British Indian to take up such a role since the inception of the ISL.

Athwal is thrilled with the new tie-up between his club and one of world football’s household names.

“David’s arrival is a statement of intent for Odisha Football Club, the region, the supporters and, of course, the Indian Super League in general,” Athwal told Sky Sports News.

“Everyone knows David Villa was one of the most prolific, clinical strikers of his generation He’s won the World Cup, the Euros, La Liga titles, the Champions League, the list is endless.

“He’s clearly bought into our vision and aspirations as a football club. He brings a wealth of experience to the club and Indian football. The way we look at it is he is going to be very important for our success moving forward.”

Odisha Secretary for Sport and Tourism, Vishal Dev, has also welcomed Villa’s arrival, insisting it is a boost for everyone associated with football in the region and the country at large.

“As far as David Villa is concerned as a player, I think he is everything that success in a footballing career stands for,” Dev told Sky Sports News.

“He won the Euros and the World Cup with Spain, and La Liga and the Champions League with Barcelona, and we are hoping he will bring that formula to Odisha FC which will see Odisha FC hopefully make it to the top of the ISL table next year. We are very, very excited, delighted and confident that his arrival will make a big, big difference to Odisha FC.

“We saw what players like Alessandro Del Piero and Nicolas Anelka did when the ISL first started, they ensured the ISL got off to a brilliant start. With David Villa coming on board, I’m sure Odisha FC will also be able to get that benefit and advantage.”

For more stories, features and videos, visit our groundbreaking South Asians in Football page on skysports.com and stay tuned to Sky Sports News and our Sky Sports digital platforms.