Report and highlights from the Sky Bet Championship clash between Huddersfield and Barnsley at the John Smith’s Stadium as Daryl Dike scored the only goal of the game to seal victory for Tykes and take them a big step closer to booking their play-off spot.

Barnsley strengthened their grip on a Championship play-off spot with a thoroughly deserved 1-0 win at Yorkshire rivals Huddersfield.

As for Huddersfield, they are still not mathematically safe from relegation after this loss.

The visitors showed their attacking intent right from the off. Dominik Frieser went close inside the first minute with a near-post header that was just kept out thanks to an unorthodox clearance by Rarmani Edmonds-Green. 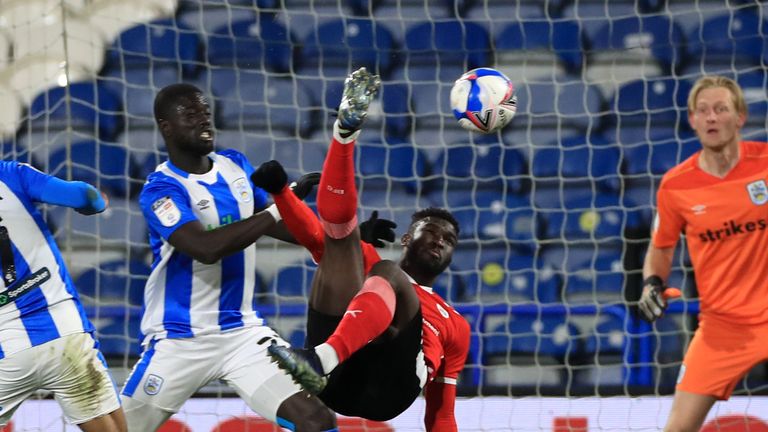 Yaya Sanogo then missed a glorious chance from a well-worked corner for the hosts, somehow planting a header wide from a few yards out.

Cauley Woodrow then fashioned a chance out of nothing when he kept the ball in play despite Town defenders switching off. But from an acute angle the visitors’ centre-forward screwed a shot wide.

Huddersfield’s Josh Koroma, making his first start in more than four months, then burst through but Michael Sollbauer did excellently to stay with his man and put in a fine block just as Koroma shaped to shoot.

The rest of the half belonged to Barnsley with a clutch of chances going begging.

Frieser prodded a shot straight at home goalkeeper Ryan Schofield, Woodrow went close from distance and Alex Mowatt then blazed over when gloriously placed in the last action of the first half.

After the interval the Reds picked up where they left off with Woodrow’s driven attempt deflected behind for a corner.

The Reds were peppering the hosts’ goal and Carlton Morris’ header was tipped behind by a busy Schofield shortly after before a deflected drive by Mowatt almost caught out the home keeper.

After a period of pinball in the Town box, Barnsley finally took the lead – and it was long overdue.

Striker Dike produced a fine, bicycle kick from just a few yards out for his ninth goal since joining on loan from Orlando City earlier this year.

The lead could and should have been doubled when Morris saw a header cleared off the line before Michal Helik inexplicably hit the crossbar from just a few yards out.

Huddersfield then registered their maiden attempt on target with 80 minutes on the clock but Lewis O’Brien could only direct his effort straight at the under-worked Brad Collins.

Normal service resumed thereafter and Callum Styles almost added gloss late on, but Barnsley had to be content with a narrow but deserved win.