At the start of King Otto, the eponymous hero straightens up on his throne-like chair and says in German to his off-camera interlocutor: “I don’t understand what’s going on here.”

Briefly, they negotiate about language before the interview proceeds in German. In two ways, this confusion could be the motif for what is technically a documentary, but comes across as an Aesopian fable. 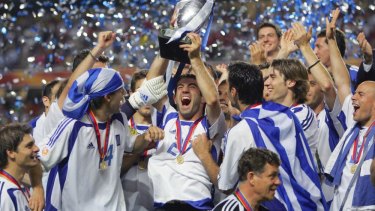 The first is that the story of Greece’s victory against astronomical odds in the 2004 European Championships was and remains impossible to grasp. No one understood what was going on. The other is that it grew from the grafting of one culture onto a very different other, a project that could have been easily and hopelessly lost in translation.

In 2001, Vasilis Gagatsis was new to the presidency of the Greek football association and despairing of the game in his country and a national team he called a “travelling circus”. He reached out to Otto Rehhagel, a maverick but highly decorated player and manager in Germany. “I thought that being German, he would be able to instil the discipline we Greeks lack,” Gagatsis said.

Recognising the language barrier, Rehhagel drafted in Ioannis Topalidis, a Greek-born player and manager from Germany’s lower leagues. “Otto wanted me to translate for him, but you can’t translate German into Greek word-for-word,” Topalidis said. “It’s impossible.”

Ditto the sentiment. Topalidis brought the sugar coating. “You have to be aware of Greek culture,” he said. “Greeks see things a bit differently. You can’t tell them something so directly.” 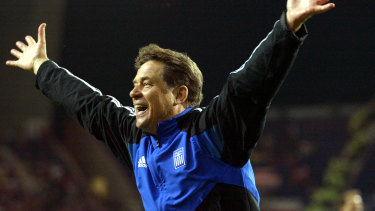 Rehhagel’s team had no stars, nor would any become stars individually. His era began inauspiciously with a 5-1 defeat by Finland. But then the miracle began to manifest, and the wonder of it all is still apparent in the voices, faces and hand movements of the principles 17 years later.

More than other sports, success in soccer is not enough; it puts a premium on style. Rehhagel’s method was disparaged by the length and breadth of Europe. “The only underdog in history that everyone wants to see beaten,” sneered one headline. 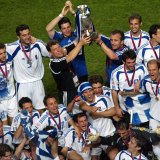 Rehhagel was unapologetic. “You can only play the game for which you have the players,” he said. “So I came up with a plan. Just like my life: it’s controlled offence.”

The message was one thing, the messenger another. “Greeks being Greeks, if I just stand there and explain it devoid of any emotion, they won’t be convinced,” he said. So he made his game plan analogous to boxing’s rope-a-dope. All these years later, Topalidis still shapes up as he remembers.

Greece had never so much as scored a goal in a major championship previously, and began Euro 2004 as 300/1 no-hopers, yet suddenly were in the knock-out phase, facing defending champion France, Thierry Henry, Zinedine Zidane et al.

To defender Giourkas Seitaridis, Rehhagel said: “Henry said he doesn’t know who you are. After this game, he will never forget you.” To his team, he said that he had seen France play and was sure Greece could win. Said a teammate to defender Seitaridis: “That’s it, the German’s lost his mind.”

Greece did beat France, then a talented Czech Republic team in the semis. Rehhagel was not losing his mind, he was spreading it. Asked what he said to his players before the final, Rehhagel breaks into a ditty – in Greek. Reflecting again on critics, he said: “Maria Callas was the greatest singer in the world, but she was unique, so she was criticised. We were the Maria Callas of the tournament.”

As the tournament progressed, Rehhagel simplified his message. For the final, he appealed to the national pride he could now feel coursing through even him. He told them he believed in them. 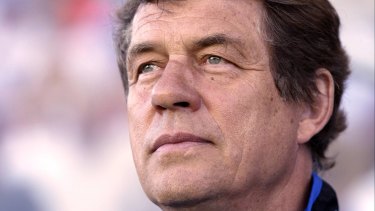 The delirium washed around the diaspora; Melbourne gets a look-in. At a euphoric reception in Athens’ Panathenaic stadium, a packed crowd chanted Rehhagel’s name. Since ancient times, Panathenaic has been a habitat of gods.

“As time and matches went by, he became more like us, deep in his heart and deep in his soul,” said defender Traianos Dellas. “And we became more German. More in control of our emotions. We became calmer and cold-blooded.”

Germany offered Rehhagel its national job, but he declined. He’d come to Greece for a tournament and stayed 10 years. Though Greece never reached those Euro 2004 heights again – who could? – they continued to prosper under Rehhagel, eventually spending a moment in the world’s top 10. In a place beyond language, the German and the Greeks understood each other perfectly.

“I wanted Otto Rehhagel because he is German, but I never dreamed that this German would have the heart of a Greek,” said Gagatsis. How else could this story end but with a rhetorical flourish?