Glasgow: They stumble out of the city’s gothic pubs wearing cork hats, clutching inflatable kangaroos and singing Live It Up – the 1980s hit by Mental As Anything – at the top of their voices.

These weren’t Aussie two-pot screamers on a Contiki tour; they were seasoned soccer fans with thick Glaswegian accents, a brand-new idol and a long night of partying ahead. 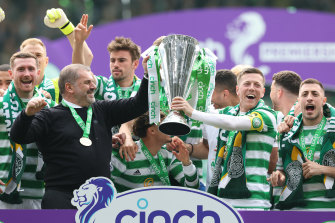 Ange Postecoglou lifts the trophy with his team.Credit:Getty Images

Gathered in George Square, in the heart of Scotland’s biggest city, thousands more drink and cheer on Celtic’s latest success into the morning while draping green and white scarves over statues of revered home-grown literary figures such as Walter Scott, Robbie Burns and Thomas Campbell.

Their discovery of all things Australiana is in tribute of Ange Postecoglou, the son of Greek immigrants who fled a military coup in the 1960s and set off on a month-long boat trip to Melbourne with young children and no jobs to go to at the other end.

Despite Postecoglou’s coaching credentials at home and in Japan, this time last year most fans here had never heard of him. Just eight months ago, some predicted it was about to end in tears.

But he had always dared to dream even while those in the local soccer community around him suggested he should know his place in the world. 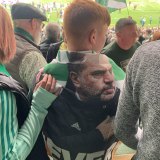 A young Celtic support draped himself in an Ange Postecoglou flag on Saturday.Credit:Rob Harris

He is now, in many ways, at home. Immersed in a city where a love for football (don’t dare call it soccer) runs deep. In Glasgow, it could be said Celtic now provides a sense of meaning and belonging to more people than the Catholic Church. It’s not just a football club, but a cultural institution.

You don’t need to ask the fans what they think of their new manager. The mere hint of an Australian accent from a visitor will have them rushing to volunteer their thoughts. Club stewards and volunteers speak of him with great reverence. Postecoglou’s passion for the game and fierce pursuit of success has breathed new life into one of the world’s most famous clubs. 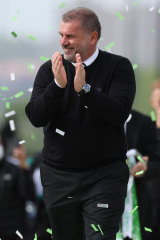 Postecoglou has turned Celtic around this season, despite a rocky start.Credit:Getty Images

“We love Big Ange,” they say. “He’s been so good. He’s changed the club. He makes the fans feel part of it again.”

Young children proudly wear Ange masks to the game. Some, as well as mum and dad, drape themselves in flags bearing his image and trademark quote “We never stop”. Others wear replicas of the black woollen knits he chooses to wear over his match-day shirt and tie.

Moments after his team lifted the Scottish premiership trophy after a 6-0 demolition of Motherwell on Saturday night (AEST) – his sixth and most significant top-flight crown across three continents – an emotional Postecoglou let it all out.

“It is pretty hard for me to explain to people but when you go grow up on the other side of the world, this is what you crave,” the 56-year-old said on the sidelines of packed Celtic Park, where 60,000 fans were still there almost an hour after the final whistle.

“The moment I got here I tried to immerse myself in it, it is what I want to be part of. It hasn’t disappointed.”

Postecoglou is the first Australian to coach, let alone win a title, at a major European club. And the significance is not lost on him. While Celtic has now won 10 of the last 11 Scottish Premiership titles, they finished last season 25-points behind local rivals Rangers and the club was plunged into chaos.

He was mocked as “Ange Postecog-who?” when his shock appointment was leaked to the Scottish media. When the club dropped 11 points in the first seven league games, former Scotland striker Kris Boyd declared he had no authority, no backing, no support from the board and virtually no chance of being successful.

“Postecoglou might as well hand in his resignation and take himself back to Australia,” he wrote in The Scottish Sun.

But now, after a 31-game undefeated streak, he is the king of his castle, the manager of the year and the top dog at Paradise, the home of the 134-year-old club. The achievement puts him at the top with a handful of Australian sporting feats on the world stage.

However, it’s the way he transformed the club, winning over its players, its hundreds of thousands of fans around and his fiercest of critics that elevates his sheer impact above and beyond a list of comparative achievements in Europe of great Australian soccer figures, such as Tim Cahill at Everton, Craig Johnston at Liverpool, Harry Kewell (Leeds and Liverpool) and Mark Viduka at Celtic and Leeds.

He has become a cultural phenomenon. Diehard fan and rocker Rod Stewart has turned up unannounced at his home and hugged him. Snoop Dogg wants to party with him.

Mark Palmer, a sports writer for The Scottish Times, said while winning a premiership is always a team effort, he has pondered whether there has ever been a stronger case for saying none of it would have been possible without one man.

“Perhaps, in the entire history of Celtic, has any one individual ever made a more colossal impact more quickly than Postecoglou has this season?” he asked.

“Postecoglou has given Celtic a style and substance while bringing order and strategy to the club’s previously haphazard approach to recruitment. Furthermore, he has healed and revived a relationship with supporters that had fractured so badly.”

James Forrest, a Celtic fan whose regular blog posts have ridden the wave of emotions of the club’s ups and downs over recent years, said the scale of what Postecoglou has achieved in just one season is “extraordinary”, even if most fans simply believe he’s restored the club to its rightful place.

“He is clearly a man, a manager, of substance and if he had taken over Celtic in better times, under better conditions, there is zero doubt that he would have been a mighty success story,” he said.

“The world may have seen his achievements and simply not understood the full range of his talents and skills … in a way it was perfect that he inherited a shambles, that he took over a team which didn’t need fixing but transforming. A club that required a revolution.”

Fellow Australian Tom Rogic, who grew up playing in Canberra before spending the past decade at Celtic as an attacking midfielder, farewelled the club on Saturday. His career was languishing before Postecoglou turned up last year. This season he made Professional Footballers’ Association Scotland Team of the Year. The pair shared a warm embrace, with Rogic moved to tears by the applause of the crowd after he was substituted in the second.

“I couldn’t contain my emotion, it was hard. It’s a special club, it’s been an enormous part of my life,” he said. “Off the back of last season, it’s enormous. It’s a special season to go out on.”

Rogic says he always believed in Postecoglou and says it’s “nice to see that people on this side of the world are starting to take notice”.

Goalkeeper Joe Hart, who was capped 75 times for England and among the English Premier League’s stars with Manchester City for almost a decade, says at 35, he’s felt like “a young kid coming into training every day” under Postecoglou. “He’s made an old donkey like me feel young again,” he said this week.

Postecoglou shared a hug with his wife Georgia and young sons Max and Alexi prior to an emotional lap of honour of Celtic Park after the game. He has jokingly lamented the fact his boys speak with an American twang after a few years in an international school in Japan. 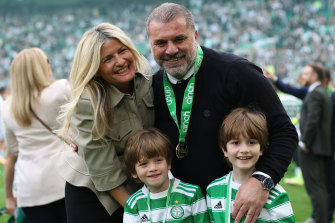 Postecoglou with his wife Georgia and kids Max and Alexi.Credit:Getty Images

Sustained success will likely mean it won’t take long before they’re speaking with a Glasgow patter. A contract extension is mooted and the Champions League – the ultimate challenge in club soccer awaits.

Introduced to the packed stadium to Men at Work’s Down Under for the presentation, the man of the moment left the crowd with goosebumps after a stirring thank-you speech. He paused for a moment to regain his composure as the fans chanted his name.

“I’ve got a group of players who have been unbelievable, champions of Scotland and well deserved,” he said, before describing Celtic fans as “the best on the planet”.

Decades of hard works have paid off almost overnight for this Australian. And it’s easy to get the feeling he’s only just begun.