OLIVER HOLT: Freedom Day had come early and Wembley was literally bouncing with the level of febrile anticipation… but hopes of a brave new era were dashed by the ghosts of England’s past

By the end of extra time, it felt like torture. Some people just wanted it to be over, just so that the tension could be released. England had wanted this so much.

It was going to be a victory that was to draw a veil over all the years of hurt and usher in a brave new world. A penalty shoot-out was almost too much to bear with all its cursed history and all its associations for England manager Gareth Southgate. England’s fans were emotionally exhausted before the first spot-kick was even taken.

Four hours before kick-off, Wembley already seemed to be aflame. Fans had already gathered in their thousands. They were standing on walls, holding flares in their hands that were bellowing plumes of red smoke into the air. Plastic cups full of beer flew through the air. It felt febrile already. As if no one knew quite how to deal with this level of anticipation. 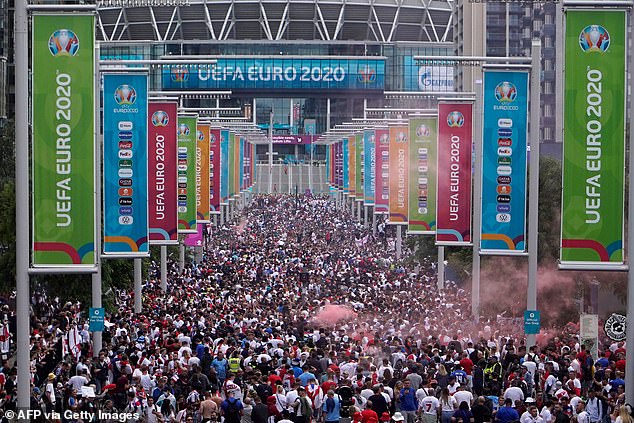 After so long penned in and restricted, this was their Freedom Day come early. This was the release. This was supposed to be the day when the 55 years of hurt came to an end and the occasion was so big and the prize so precious that some people couldn’t deal with it. Some of the ghosts of England’s past came back before the match had even begun.

It was frenzied, frantic. People so desperate to get in to see England in their first major final for more than half a century that they tried to storm the barriers, overpowering stewards, fighting with them, tumbling over in a great, roiling mass, dragging themselves to their feet and then running again, trying to find an open door. Camera phone footage showed tragi-comic running brawls on the concourses.

The England players’ intensity mirrored the fervour of the fans. Even a side as experienced as Italy looked overwhelmed. Only two minutes had gone when Kane drilled a curling pass out to Kieran Trippier, who was hurtling down the right. Trippier hesitated as Walker ran past him on the outside. He ignored him. He floated a cross to the back post. And there was Luke Shaw. 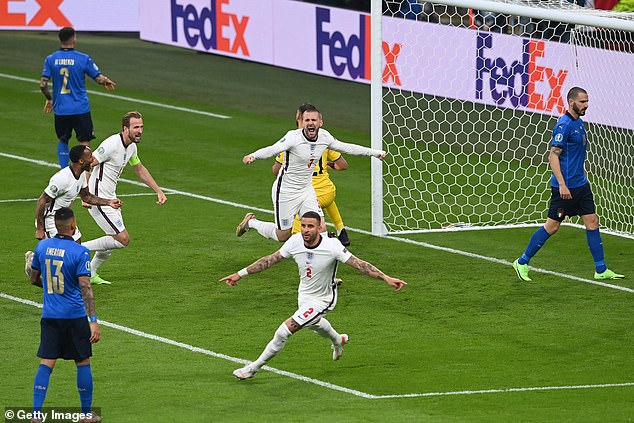 Somebody wrote on Twitter it was going to be a long 88 minutes. When Italy won a free kick on the edge of the box, the giant screen picked out an England fan with her head in her hands and her face elongated in an expression of anguish like The Scream.

The game settled down and when Italy enjoyed possession, it was accompanied by a low hum of booing until the possession ended and then a loud cheer when an England player took over. The first verse of Football’s Coming Home was sung after ten minutes.

Everyone who has ever played sport has felt a version of that. Not this, though. Only the 11 men out on the pitch wearing England shirts and knowing that it was their task to hang on and win England’s first trophy for 55 years could know and understand that pressure. There were four minutes added time at the end of the first half. Four minutes? Four minutes? Already, it felt like an eternity.

Italy came more into the game towards the end of the first half but England kept them at bay. One by one, they stepped up. Declan Rice set off on one run a couple of minutes before the interval, body swerving past one challenge, accelerating past another, that made him look like Franz Beckenbauer. Rice has had a good tournament. When it mattered most, he was outstanding.

Jack Grealish ran down the touchline in stoppage time and the crowd chanted their backing for him. Marcus Rashford was there, too, giving the fans a thumbs up. Before the tournament, many expected that these men would be at the centre of the action. Their cameo roles were evidence of Southgate’s readiness to make unpopular selection decisions, a readiness which lasted from the first game to the last. 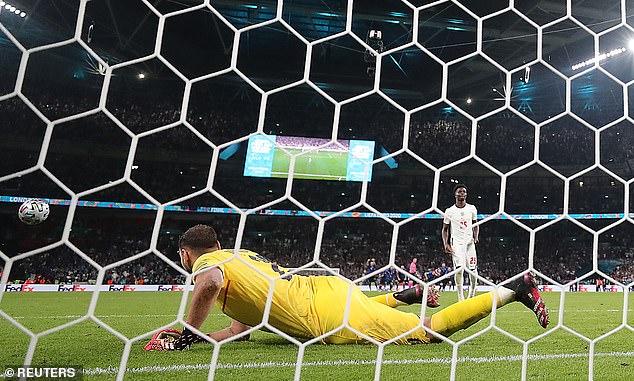 Five minutes into the second half, Italy were awarded a free kick right on the edge of the England area. The stadium descended into silent dread. Lorenzo Insigne stepped up to take it and whistled it round the wall. We waited for the net to bulge. It didn’t. The giant screen, which had become a window into all our souls, cut to a grey-haired man who was bent double with relief on his seat, his head somewhere between his knees.

From the end England were attacking a drum beat and beat and beat. It seemed to be getting faster and faster, like all our hearts. England had ceded momentum to Italy by now. Italy were pressing and pressing and dominating possession now, searching for the equaliser. England were sitting back in a bank of five and a bank of four, soaking up the pressure. Could they keep it up? The drum beat on.

An Italy goal was coming, surely. Federico Chiesa, Italy’s best attacker, cut inside on to his right foot and aimed a shot towards Pickford’s left. Pickford got down and palmed it away. It was only a matter of time until they equalised, surely. And then they did equalise. Leonardo Bonucci scrambled it in. The drum went silent and the blue hordes in the Italy end bounced and leapt and tumbled over the seats covered by black sheets.

Italy were in control again now. The truth is that they had been in control since before half time. They were aggressive with substitutions early in the second half. They had started to overwhelm England with the energy England had possessed early in the game. They were playing like a team that was expert at game-management. Everyone England fan in the stadium could feel the trophy slipping away.

Then England rallied. A little. Insigne was booked for a foul on Kalvin Phillips. That raised the spirits of the home fans. A slightly forlorn chorus of ‘Football’s Coming Home’ sounded from the stands. It did not have the same conviction as before but maybe it wasn’t over after all. Maybe there was still hope. Sterling ran at the Italy defence. England got another burst of energy. 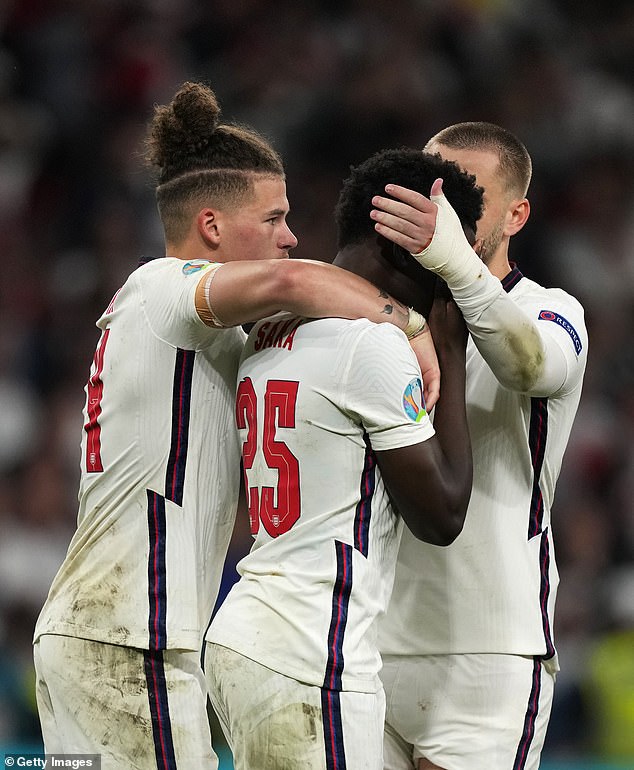 At the start of extra time, Giorgio Chiellini ran on to the pitch and went to the Italy fans, shaking his fist at them, urging them to increase the volume of their support. Italy seemed to have the stronger spirit now. They had played superbly in the second half. It was obvious England were going to have to summon something special to turn back this tide.

In the second half of extra time, England held their own. They created confusion in the Italy box and Gianluigi Donnarumma made a hash of punching away a cross. The giant screen showed it in super slo-mo. The crowd let out a collective murmur, a sigh of regret for what might have been.

When the board signalled there were three added minutes at the end of the second period of extra time, several England supporters in front of the press box put their hands on their heads. The tension was unbearable. Italy were in the ascendant and England were crawling towards the line. When the final whistle went, there was another murmur. The ghosts of penalty shoot-outs past came out to play.

Not penalties. Not another villain. Not another fall-guy. Maybe those fears are our fears, not theirs. All our players know of shoot-outs is Colombia at the 2018 World Cup. When we won. They do not care for ancient history. They are here to write their own history. Keep repeating that mantra. Keep believing.

Kane scored. Huge cheer. More relief than elation. Before Andrea Belotti took Italy’s second penalty, Jordan Pickford jumped so high on his line, he looked like he was going to vault the crossbar. He stopped leaping and saved the penalty. This time, the cheer rent the air above north London.

When Rashford stepped up, there was a hush. He took his stuttering run up, the goalkeeper went the wrong way and then Rashford hit the post. Not him. Please not him. Not after everything he’s done for so many. But sport does not respect good deeds or good men. The big screen showed Gareth Southgate. In his eyes, it looked as if he knew the same nightmare was unfolding again.

Then Jadon Sancho missed and surely it was over now. Especially as it was Jorginho stepping up. Jorginho never misses. Except that one time against Arsenal. If he scored, it was over. He was bound to score. But Pickford guessed right and clawed the ball to his chest at the second attempt. There was new hope.

On the touchline, Southgate had his arm around Steve Holland’s back as all the staff and players stood linked together. He gave Holland a little pat, a gesture of thanks, a gesture of consolation, a gesture of resignation. And then he walked on to the pitch in search of Saka.