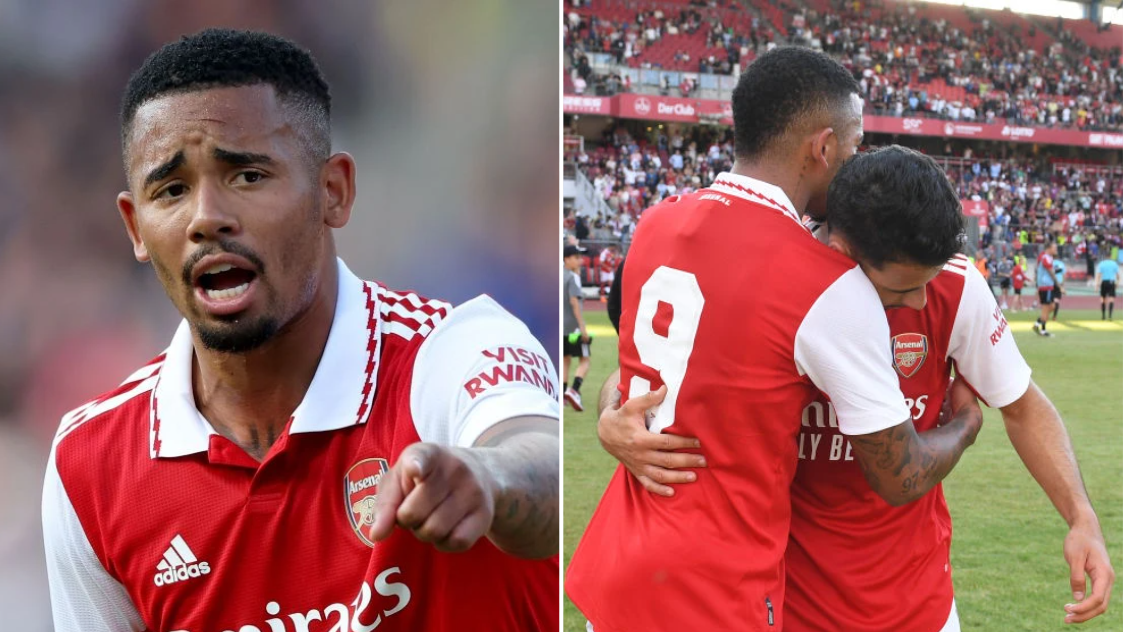 Gabriel Jesus is loving life at Arsenal, describing his summer transfer as ‘the best decision’ he could have made, while he has already been blown away by one his new team-mates.

The 25-year-old had dropped down the pecking order at Manchester City following the arrival of Erling Haaland, shunning interest from Champions League clubs in order to reunite with Mikel Arteta.

He has already made an exciting start to life with the north London club, netting three goals in pre-season and laying on one assist.

Jesus has received praise from his manager, team-mates and fans alike following his lively displays, though the Brazilian has also been impressed by what he has seen from the players already at the club.

Chief among them is compatriot Gabriel Martinelli, with Jesus effusive in his praise of the young winger.

During an interview on Podpah podcast, Martinelli’s name was brought up and Jesus responded: ‘Woah! Martinelli – he’s an animal. An animal! He never gets tired!’

He continued: ‘[My new team-mates] at the club are so hungry, they’re desperate to get this club back to winning a Premier League after 20 years. This kind of challenge excites me a lot to be here.’

From being something of a utility player at City – often rotated by Pep Guardiola and lining up in a range of positions – Jesus is quickly establishing himself as the main man at Arsenal.

The Brazilian – a four-time Premier League champion – feels his role with the Gunners is very different and he is now seen as a key, senior player others look up to, which is something he is relishing.

He explained: ‘I wanted a new challenge. I want to play every game, that’s why I came here. I compare this Arsenal team with the City team when I arrived there. There’s a lot of young players.

‘Everybody at the club has received me so well. I’m two or three years older than most players here but they look at me as a very experienced player. I like that. I like to be a role model for other players.’

He added: ‘I’m a person that thinks a lot. I’ve been thinking about [leaving City] for one or two years. The best decision that I could have made is to be here at Arsenal.

‘I needed to play football with a smile on my face again. My mother watched our game [against Orlando City] and called me to say, “I can see you’re different, you’re playing happy!” I got emotional hearing that.’