Home » Harvey Barnes out for at least six weeks with knee injury; Brendan Rodgers says Leicester 'down to bare bones'

Leicester manager Brendan Rodgers says Harvey Barnes will be out for at least six weeks and will require an operation for a knee injury.

Barnes was substituted early in the second half of Leicester’s 3-1 defeat by Arsenal on Sunday, and the manager confirmed after the game that the England hopeful had injured his knee cartilage, a problem he had initially picked up in a previous game.

The absence is a blow to Barnes’ chances of making Gareth Southgate’s Euro 2020 squad, having been Leicester’s star performer in recent weeks.

“It’s not good news, it looks like he needs to go in for an operation, so it will be a minimum of six weeks,” said Rodgers.

“I believe it’s around his cartilage. He had a clash of knees a few weeks ago, so it has just been irritable. Today he’s had a challenge right on it, has just made it worse.

“He’ll need that repaired. He’s had niggles with it, that’s why we tried to recover him on Thursday, to take some pressure off him, but unfortunately it’s a bad one for him, and a huge blow for us.

“I’ll hear more on Monday, but initially that’s what we think it is.”

Rodgers also had an update on centre-back Jonny Evans, who came off later in the game with a calf issue. 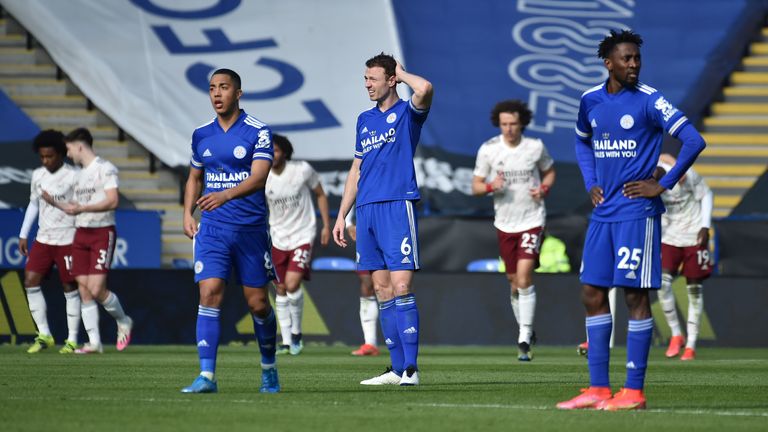 “He’s had this dead calf, which he’s been able to get through, but in some games he has made some actions that have aggravated it. He’ll need a scan to see where he’s at.

“We’re down to the bare bones, we’ve carried it all season and the players have been great. It’s absolutely fair enough. My players to this point have been brilliant, but we’ve suffered with a lot, and found a way, but when you’re missing the influential players and can’t change, it makes it difficult. We’ll find a way.

“One thing that goes when you have that tiredness is technique, when passes go astray. With our team, it’s usually crisp and precise with our passing.”

Leicester, the only Premier League side to have been in the top four for the entire season so far, are hoping to avoid a repeat of last season, which saw them drop out of the Champions League places in the final weeks of the season.

But Rodgers believes his side still have what it takes to make the top four with 12 games remaining. “The one thing I can promise is that we’ll do our very best,” said Rodgers. “I can’t control anything afterwards. You’ve seen the reaction to players up to now, they weren’t disappointed from the very first game of the season.

“We now have to dig deep. We can’t control the injuries but we can control the attitude and mentality of the team, and for that the players are absolutely brilliant. We’ll do our very best with what’s available until the end of the season.

“You can control performance, you can’t control injuries. Our goal is to arrive in European football again, we’re still in a great position to do that. Our defeat today won’t change that.

“I don’t want to go on about it too much. We can’t really impact the situation. We’ll continue to fight, continue to work, and look forward to this challenge and embrace it.”

Will injury-hit Leicester avoid another drop-off?

Leicester were hoping to move up to second in the Premier League table on Sunday. They’re up to second – but in the injury standings instead. Harvey Barnes and Jonny Evans have joined a worrying number of their colleagues in the treatment room and defeat to Arsenal leaves the third-placed Foxes’ nervously looking over their shoulder.

That may seem premature and dramatic for a team which has lost just twice in their last 13 league games but without key figures across the park and amid the context of last season’s drop-off, which saw Brendan Rodgers’ side slide out of contention for a Champions League qualifying place, there will be worry in and around the Leicester camp.

Youri Tielemans gave Leicester an early lead against Arsenal but they were otherwise disjointed in their attacking play and badly missed the creativity of James Maddison to build up the pitch. With Jamie Vardy looking in pain for long periods and Barnes suffering a knee problem, their attacking options could take a further hit.

At the back, Luke Thomas – in for James Justin – struggled against Nicolas Pepe, while Daniel Amartey’s deployment at centre back after Jonny Evans went off was a reminder of the strain they’re now feeling in that department, with Wesley Fofana and Wes Morgan absent.

With Dennis Praet and Ayoze Perez also out, that’s eight important figures Leicester are currently missing and there are signs the available players – who were also knocked out of the Europa League on Thursday – are feeling the strain.

Given their depleted resources, the back-to-back Premier League games against Burnley, Brighton, and Sheffield United is a kind run of fixtures. But anything other than maximum points in those games will have critics pointing to their ominous run-in to the season: Man Utd, away. Chelsea, away. Tottenham, home.

Arsenal now go to Burnley on Saturday March 6 at 12.30pm in the Premier League, before going to Olympiakos in the Europa League last 16 first leg on Thursday March 11 at 8pm.