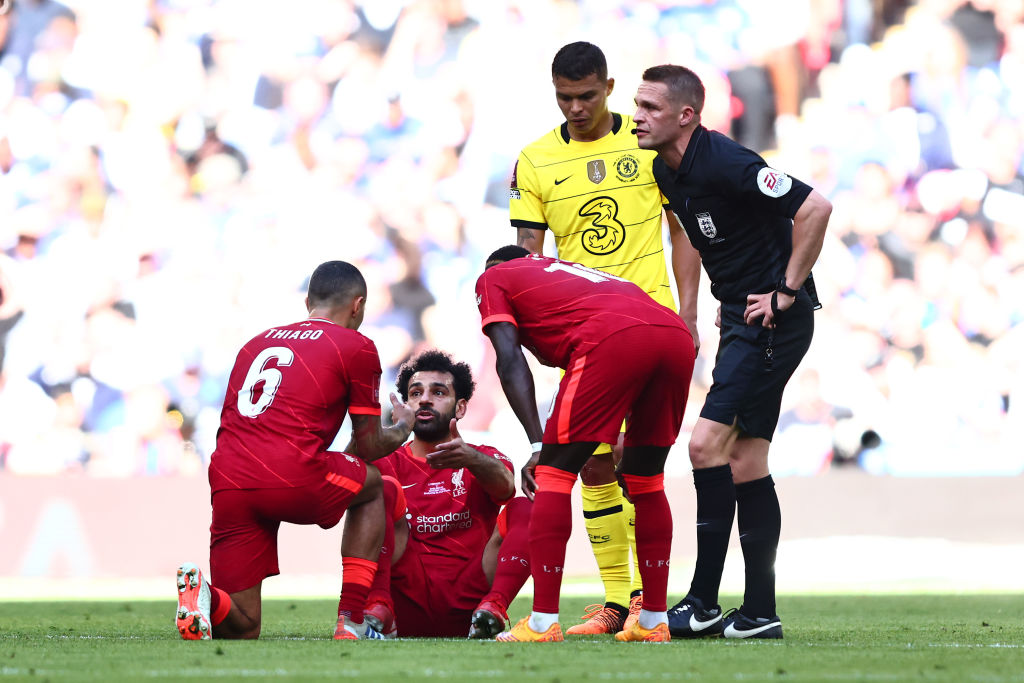 Mohamed Salah has suffered an injury in the FA Cup final against Chelsea and applauded the Liverpool fans before leaving the Wembley pitch.

Salah was replaced by Liverpool forward Diogo Jota on 32 minutes after going down off the ball. The Egyptian appeared to receive treatment to his groin before leaving the field.

The 141st FA Cup final was goalless at half-time despite Luis Diaz going close for Liverpool and Christian Pulisic almost scoring for Chelsea.

Former England midfielder Jermaine Jenas said on BBC One: ‘This is a big worry, Mohamed Salah is not the type of player who just takes a seat.

‘He plays a lot of games, a lot of minutes, he’s had a long season – I know most Liverpool players have but chuck the African Cup of Nations into that as well.’

Ex-Chelsea star Karen Carney added: ‘When you see all the team mates around him, that’s when you worry. I think it’s his groin.’

ð¨ Mo Salah has picked up a knock and has been withdrawn after just over half an hour ð¨@LFC | #EmiratesFACup pic.twitter.com/GaYXJTQ3R8

Before Jurgen Klopp’s side face the La Liga champions in Paris, they could add another two trophies to February’s EFL Cup success, with Liverpool still challenging Manchester City for the Premier League crown and of course aiming to beat Chelsea today.

Discussing Salah’s withdrawal at half-time, Premier League legend Alan Shearer said: ‘Irrespective of who Liverpool were going to bring on, it was going to be a top quality player. They’ve got [Divock] Origi on the bench as well but it’s a big blow for Salah.’

On the opening 45 minutes, Shearer added: ‘Liverpool battered Chelsea for the first 15 minutes, they should have been two goals up but they missed two big chances.

‘To be fair to Chelsea, they settled themselves down, got back into the game, played their way back into the game and it was them who were then creating the big chances. I don’t know how it’s 0-0 – poor finishing really.’