Home » Soccer » Grealish doesn't 'fit like a glove' at City yet

‘He is fantastic but I don’t think he fits like a glove.’ That was Michael Owen’s assessment of Jack Grealish’s start to life at Manchester City following his £100million move from Aston Villa in the summer.

With just two goals and three assists from his 15 games in a light blue shirt, it is hard to argue against that judgement right now, though it is not for a want of trying on Grealish’s part – or Pep Guardiola’s.

Grealish has played in 15 of City’s 17 matches so far this season, only missing the 2-0 home win over Burnley and an EFL Cup win over Wycombe. He has started all but two of those matches. Worryingly, all six times City have drawn a blank this season Grealish has played, starting five of those.

Guardiola is clearly a massive fan and prioritised Grealish’s signing over that of his other summer target, Harry Kane. The arrival of the former Villa captain and the failure to land Kane has meant a cementing of the striker-less system that worked so well for Guardiola in the second half the title-winning 2020-21 season. 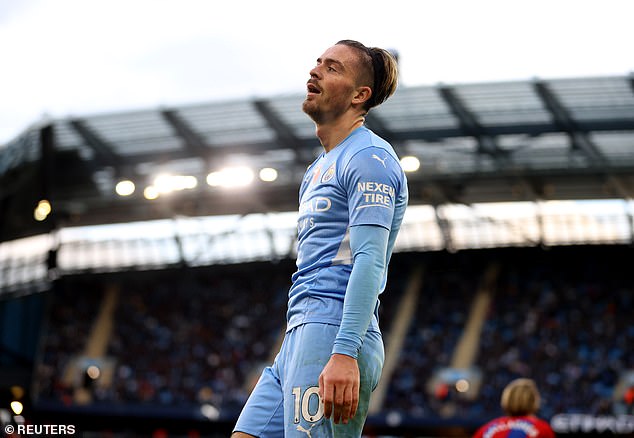 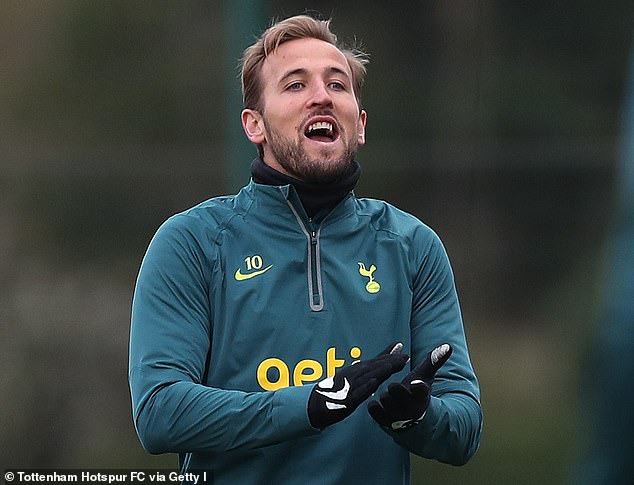 City fans have taken to Grealish and his bustling yet silky style of play, though they could be forgiven for wondering what might might have been had they signed Kane instead.

That they were well short of Tottenham’s £150m valuation of the England captain owed as much to City’s signing of Grealish as the valuation itself.

Certainly, they might have expected more goals from Kane. Grealish’s tally of two – and just one in the Premier League – is symptomatic of City’s profligacy this season. Of course, most teams can only dream of scoring 20 goals in 10 Premier League matches, but for a team of City’s talent and riches that is below par.

Title rivals Chelsea and Liverpool have scored 26 and 29 respectively in their 10 games, while if City continue scoring at the rate they have been they would finish the season with 76 goals – their lowest under Guardiola is 80 in 2016-17 when they finished third.

So City are just not quite clicking in the final third yet this season. That is not a problem solely down to Grealish, but his stats again bear it out.

He has created just two ‘big chances’ from nine matches, while at Villa last season he made 14 in 26. His crossing accuracy is also down from 22 per cent last season at Villa to just 12 per cent at City. However, that is arguably down to City not having a striker in the box to pass or cross to.

Though he was also operating primarily on the left at Villa, Grealish’s role has changed significantly now he’s at City, and his adaptation to that role is probably the single biggest factor in his slow start to life at City. 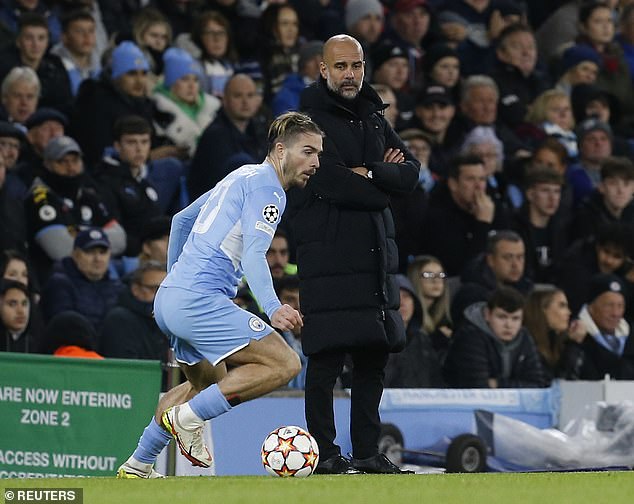 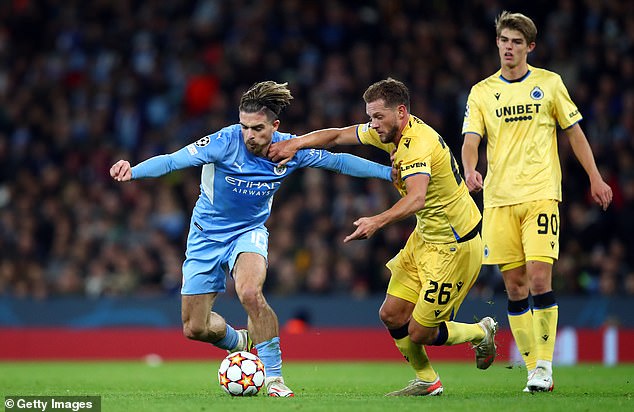 Rio Ferdinand summed it up succinctly when debating with Owen on BT Sport after City’s 4-1 win over Club Brugge on Wednesday night: ‘He has to stand wide. It’s not what he is used to. He is used to drifting and ghosting into positions to free himself up. That change will take understanding… sometimes it takes the naturalness out of his game. It means he is not off the cuff and that is one of the best parts of his game.’

Again, this is born out in the stats. At Villa, Grealish was averaging 38.31 passes per game. At City, he is only averaging slightly more than that, at 40.78 per game, despite Guardiola’s side enjoying far more possession than Dean Smith’s.

Put simply, the ball goes through him far less at City than it did at Villa. As Owen says: ‘Grealish is used to playing in a team where he is the best. Now he is playing with other great players. He needs to be able to trust those players and do things a little bit quicker.’

Even without a striker, Guardiola’s team now is recognisable to the City we have seen for the last five years and his Barcelona and Bayern Munich teams before that. The wingers stay high and wide, doing their damage in the final third by taking on their full-back and looking to either make or get on the end of cut-backs and low crosses across the box. It has been rightly pointed out that other players to have played this role for Guardiola in recent seasons have also taken their time to adapt to this style. 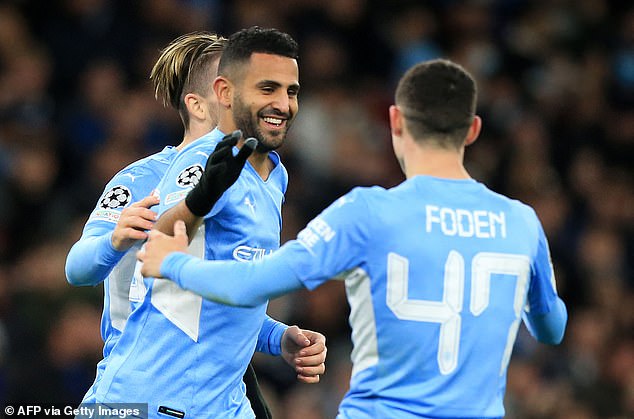 Leroy Sane scored just nine goals in his first season at City, before netting 14 and 16 in his next two. Riyad Mahrez scored 12 in his first season – but four of those came in domestic cups. In his last two seasons he has scored 13 and 14, with only one each season coming in domestic cups. He has eight in 15 overall this campaign. Grealish’s career is directly comparable to Mahrez and Sane as they both came from teams – Leicester and Schalke – who did not enjoy as much possession as City. They were also used to being given licence to roam as the main men.

Another man Grealish can look to for inspiration is, ironically, the main threat to his starting place at the moment too. Raheem Sterling scored just 10 in his first campaign under Guardiola before netting 23, 25 and 31 in successive seasons, eclipsing both Sane and Mahrez before his alarming dip in form this year.

There have been signs of late he is close to getting back to his best though after scoring just his third goal in 31 matches on Wednesday night. If Sterling does get back to his previous levels, Grealish will need to up his game to make sure it is in the centre or on the right where he plays.

There is some debate as to whether Grealish is being used in the right position by Guardiola. Though the manager seems committed to selecting him solely as a left winger, Grealish spent much of his career at Villa playing in the middle and is an option as one of Guardiola’s two ‘No 8s’.

However, with Kevin De Bruyne, Bernardo Silva, Ilkay Gundogan and Phil Foden all vying for those spots, competition is fiercer in midfield than anywhere else in City’s team. It would probably have to take an injury crisis for Grealish to be selected in midfield, but don’t put anything past Guardiola. Having gone all-in on signing him, he would surely do whatever it takes to make Grealish a success. 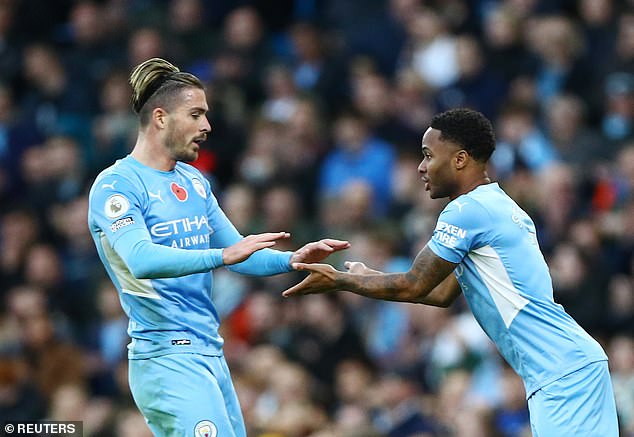 Another factor that needs to be taken into consideration when assessing the form of not just Grealish, but Sterling, Kane and too, is the physical and mental impact of England’s run to the Euro 2020 final in the summer.

While Grealish only played 172 minutes, mainly as a sub, the vast majority of players who went deep into Euro 2020 – including De Bruyne – have, understandably, started the season slowly. The positive way of looking at that, and of Grealish’s City career in general, is that things can only get better.

Grealish has far from flopped at City so far, he’s just not quite produced the goods he, Guardiola and everyone else knows he is capable of. The same can be said of City in general – but then they started last season slowly too, and look how that panned out.

At Old Trafford in the Manchester derby on Saturday, Grealish comes up against a United team who have conceded 13 goals in their last five matches. Aaron Wan-Bissaka, Grealish’s direct opponent, has endured a torrid start to the season, while  Raphael Varane is injured, Victor Lindelof is doubtful and Harry Maguire is still working his way back from injury.

There could be no better stage for Grealish to properly announce himself as a City superstar who is here to stay.